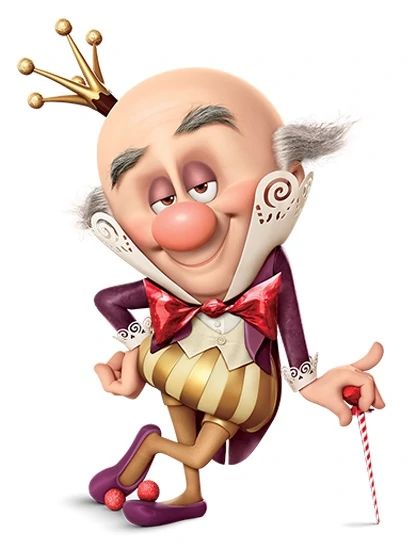 Motivation: To be played. I guess the biggest thrill in a video game character’s life is when a little boy a girl puts that quarter in, much like a toy in the Toy Story universe. I guess it’s nice to have a purpose. And terrible when that purpose goes away. All of us eventually get used up or replaced by younger, newer, fancier models that better fit the changing times. Some of us can accept that. Some of us can’t.

Character Strengths: The most diabolical thing about King Candy is his sincerity. He’s not wrong about Vanellope–a glitched character, one that allows the player to cheat, could bring down the world and condemn her to death (whatever “death” means in the video game world). This fact allows him to convince anyone who hasn’t already been corrupted (by manipulation of the game’s code helps to cement) that he is who he says he is.

Evilness: So King Candy (in his previous persona of Turbo) invaded a video game, glitched it, and got all of its characters unplugged, which I guess is like sentencing them to death. That’s pretty bad. It’s like infiltrating a gang, then getting them all arrested. But beyond that, King Candy/Turbo took over ANOTHER racing game, but learned from his mistakes. He replaced the main character’s code (Vanellope) with his own, detached her from the game, then locked everyone’s memory so no one knew the difference. Seems like the perfect crime.

Tools: King Candy was smart enough to take over a world with a little more character development than “Out Run“. That means he was able to find a racing game with a world full of minions at his command. And when you can insert yourself as the leader of those minions with a few simple button taps, what’s going to stop you? (A Donkey Kong expy, that’s who). He has what’s basically the key to Matrix-ing the world.

Also, he turns into a giant cyborg insect. That doesn’t help.

Complement to the Hero: It’s hard to know whether to compare him to Ralph, who is the more direct protagonist, or Vanellope, who is the more direct complement. After all, he’s taking Vanellope’s place as ruler of the Candy Kingdom. But in this case, I think it can be both. Both is good. He can overpower Ralph with intellect and Vanellope with charm (and minions). Both King Candy and Vanellope are confident they have a place in the game world. It’s much the story of a usurped princess and her knight in shining armor.

Fatal Flaw: King Candy’s been playing his role for so long, I think even he forgot he used to be Turbo. He looks surprised when the glitch transforms him for a second. You might call it denial, you might call it an inability to accept reality. Maybe a little bit of vanity/ego in there as well.

Method of Defeat/Death: So after King Candy is eaten by one of the cybugs he gets all their strengths and weaknesses. Like Aladdin said: “phenomenal cosmic powers, itty-bitty living space”. His new Cybug powers include an insatiable drive to go towards the pretty light that’s essentially a nuclear candy blast. I do love those ironic deaths.