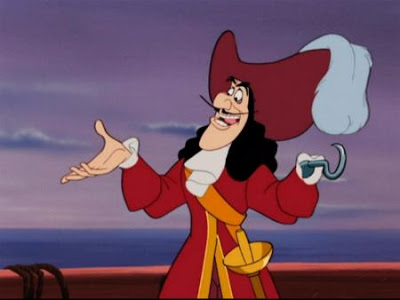 Once again, most of the credit for this guy goes to J.M. Barrie who created a great character, but a goofy villain. But that’s as it should be, as most child’s imaginations are rather goofy. Just ask my daughter who insists on naming everything “Too-Tee”.

But thanks to back story, we know this is a one pirate who means business. There has been blood spilled on his account and it’s implied that he’s actually killed at the end (though it happens off screen, and is ultimately disproved by the Direct-To-Video sequel). 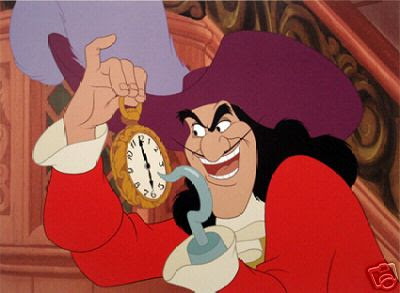 Motivation: It’s a no-brainer here — revenge. Peter Pan chopped off Hook’s hand, and now the good captain has an Ahab boner. The hand alone could have been enough, but Hook also has to dodge the crocodile that constantly stalks him.  Again, thanks to Peter.

The interesting part is that he and Peter had an existing feud, but it’s never clear why. I guess this is Neverland, and fantasies like pirates and indians exist to merely be playtime foils.

And while I’m on the subject, just how did the pirates get there? Peter Pan and his buddies have to fly, but that only works with happy thoughts and fairy dust — two things that don’t go near pirates. They have a ship. For water. It can’t fly unless Tinkerbell exfoliates all over it.

Plus Smee is always talking about setting sail for the Spanish Main. Just how do they intend to get there? They’re on a separate planet! A small one too. If they start sailing they might come right back around to the other side. There’s no Spain. How do they even know about Spain? Are they native to Neverland? If not, how did they get there in the first place? 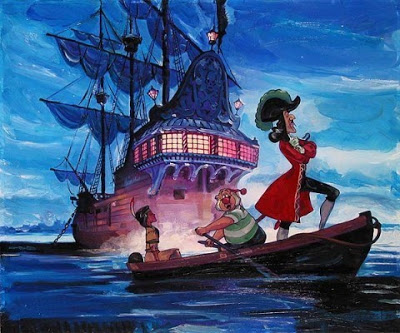 Character Strengths: Hook is a plotter. Rather than take the enemy head-on, he uses cunning to not only lure his enemy out, but put him at a disadvantage before attacking. He can think ahead, and despite his fighting prowess, prefers to stage a ruse or a trap. I don’t know if that’s because he finds it more delightfully cruel to do so, or he lacks confidence in his abilities. He did lose his hand in a fight, and he’s forever victim to Pan’s childish taunts. 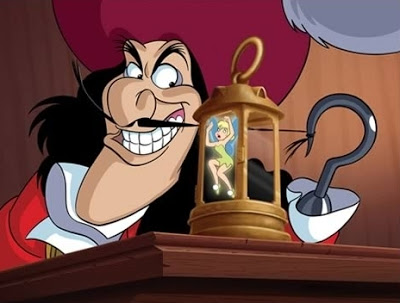 Evilness: Captain Hook is one of the models for the modern pirate. Instead of the grubby “Blackbeard” type, Hook exemplifies the “gentleman’s villain”. He always has his waistcoat, fancy hat, and keeps his mustache well-groomed. He’s trained in fencing (using the elegant epee) and speaks of good form and honor among thieves.

Of course, he doesn’t have any. He’s a pirate. Did you not see the picture? He shoots one of his crew members for poor singing.

He speaks of good form, but will eschew that if it means gaining the edge. He thrives on deception. First he steals an indian princess, using her as bait and a hostage. Then he preys on Tinkerbell, Pan’s closest ally, manipulating her into disclosing their secret location. Then rather than diving in, he kidnaps all the lost boys (plus one), then lowers a time bomb. Unfortunately, his Bond villain lack of foresight gets him in the end. 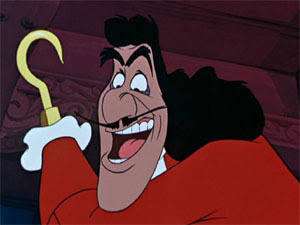 Tools: Hook has some nice tools at his disposal. First, he’s got a permanent weapon on his hand, although it tends to work against him just as much, because he lacks the discipline to control it. Also, he’s an excellent sword fighter.

Then he’s got a whole band of pirates backing him up. True, they tend to be pretty inept, since they all fall to a bunch of kids, but strength in numbers. Plus pirates come with a pirate ship, which has cannons. 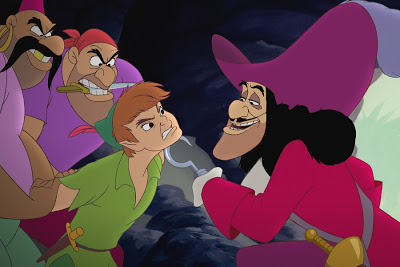 Complement to the Hero: Top marks for this one, and I attribute most of it to Barrie’s design for Hook. He’s supposed to be played by the same guy who plays Wendy’s dad — a stodgy, practical adult who rejects anything childish or silly. Hook rolls this character into one that exists in a child’s imagination, turning him into a King Charles II expy. If Hook wins, everything fun and good about Neverland will be destroyed.

He even mirrors Pan’s negative traits. Pan is immature, irresponsible, and flighty. Hook has a host of pirates to take care of and a goal on his mind. 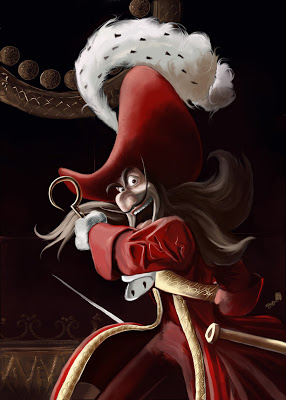 Fatal Flaw: He’s a childish fop. Not only is he incapable of performing simple tasks without Smee, but he throws a temper tantrum whenever Pan insults him. Maybe this is to show the difference between being a child and being immature. I mean, seriously: “Codfish”? That’s not an insult, that’s a McDonald’s item. And just the mere ticking of a clock sends him into panic. A little psychotherapy (maybe a skinner box) and you could turn him into a formidable warrior. 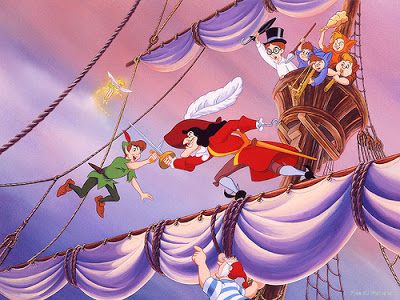 Method of Defeat/Death: Once again using lures, Hook convinces Peter Pan to fight without flying. While the crocodile waits below, he corners Pan against a mizzenmast (I don’t know what that is, I just like to say it), but Pan jumps up, snares him in the Jolly Roger and turns the tables. Hook changes from a dignified premier into a sniveling coward, begging for his life. Thinking he’s won, Peter turns his back, and Hook lunges. But Peter flies off and Hook falls into the waiting mouth of the crocodile.

Of course, this is a Disney movie. Using cartoon physics, he Jesus-runs across the ocean and skedaddles. The idiot even throws the clock — his warning signal — back into his mouth. 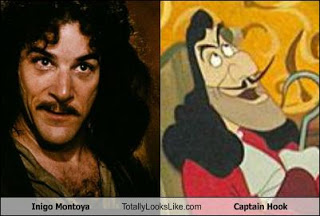