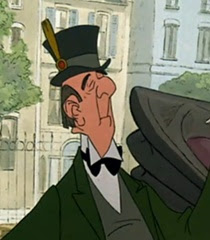 Edgar Balthazar. I have not seen a worse Disney villain. I think he may be the worst. At least he won’t be making any AFI top ten lists. He’s pathetic, he’s incompetent, he’s dull. Someone like Maleficent or Ursula would have put a bullet in his head on day one. It doesn’t help that he’s in such a tedious movie, but part of the villain’s job is to spice things up. And is there anything more cliche than “the butler did it”? 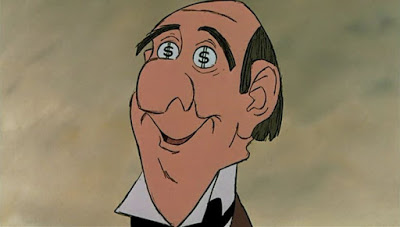 Motivation: A little part jealousy and a little part greed. There’s no originality in a guy seeking vengeance or reclamation because he got cut out of the will. That’s a white people problem first world problem rich people problem irrelevant to me. Other than that, I’d probably trust Edgar to be my butler — I don’t have any pets and I never leave the intercom on. 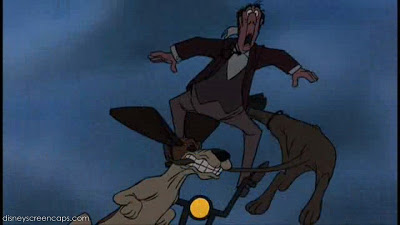 Character Strengths: I don’t think he has any character strengths. I suppose he’s a competent at his job — he helps that doddering old man up the stairs, and can get a cuppa on time — but he can’t wait a few years for the cats to die so he can get the inheritance. Even if he didn’t wait, what does he expect the cats to do with the money? Someone’s going to have to use it. Someone’s going to have to feed the cats. Just skim some cream off the top until you can get the whole bowl.

Not to mention when he does make his criminal move, it devolves into three-stooge-like buffonery with redneck dogs, sight gags, and rubberface mugging. All it does his show is ineptitude. He can’t even drown a bag of sleeping kittens. Not to mention he doesn’t have the foresight to simply shoot them in the face. And then he leaves all kinds of evidence behind, and doesn’t even make sure the cats are dead. 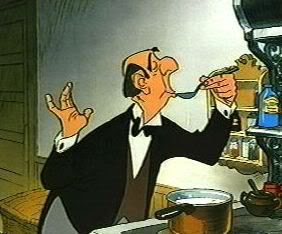 Evilness: As aforementioned, he doesn’t make the smart move of killing the cats outright. Of course, if he does that, there would be no movie (hallelujah) but in the climax when he has the chance to correct his mistakes, he screws it up. A few cats attack him (fat, stray cats, mind you) and they send him to Abu Dhabi a la Animal Farm.

Tools and Powers: He has two natural abilities. Jack and shit. And Jack left town. 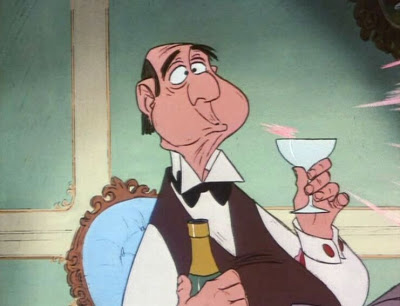 Complement to the Hero: Like Bambi, this movie is all about twee animals being twee. The wikipedia page lists O’Malley as the deuteragonist rather than the protagonist, but I think O’Malley’s the one that changes the most in this story. Fact is, it’s hard to find material for this area, because the hero is just as badly written. He has nothing he wants, no back story, he gets nothing by helping Duchess — he doesn’t even want a little tail (these are the jokes, people). He just pops up like an guardian angel, and accomplishes anything he tries. He even has no problem shedding his stray lifestyle. At least the Tramp had to think about it. 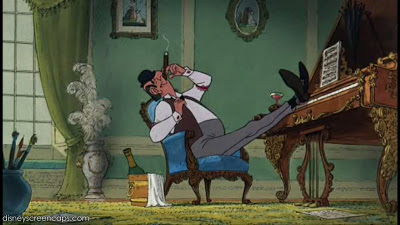 Fatal Flaw: I dunno. Maybe hubris, since for some reason he feels it necessary to tell the horse what he did, which sets off “the rescue”. Look, I know animals can’t talk, but if I had just committed a plan to betray my employer — my wealthy employer — I’d still keep my trap shut just in case someone’s hiding behind the barn.

Maybe it’s lack of killer instinct, since he doesn’t have the balls to take out a few fluffy pets (the stray, however, he tries to stab with a pitchfork… and MISSES!) Maybe his fatal flaw was that he should have learned how to use a gun. 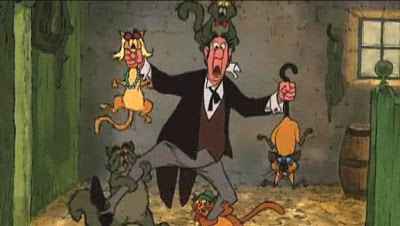 Method of Defeat/Death: While he’s attempting to seal the trunk, a bunch of alley cats scamper to the rescue, latching onto his arms and legs, until he falls into the trunk he intended to lock the cats in. I’m surprised I didn’t see a ripped out pant seat with heart underwear. 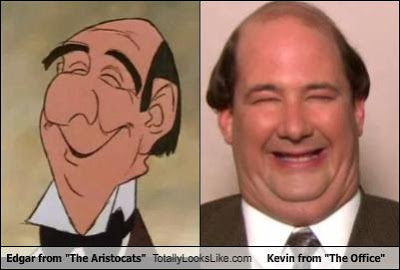 Final Rating: (Need I say it?) One star