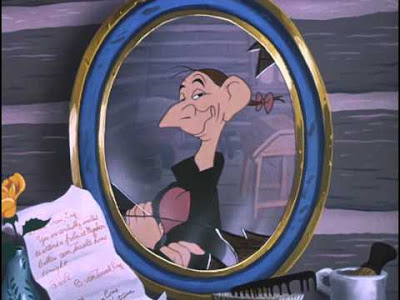 Yep. Bet you’re as surprised as I was when I realized it.

Here we have an unusual case of a protagonist who’s not the hero and an antagonist who’s not the villain. Although by the end, neither is much changed (more on that later). Even though this is a half-hour short, and not one of Disney’s best, I thought this character warranted further exploration. If for nothing else than to open some minds. I might be right, I might be wrong. But at least I get you thinking.

Motivation: At first, Crane seems obsessed with food. His first malevolent act is pilfering a pie past a poor passerby’s possession. But once he sees walking Barbie doll Katrina Van Tassel, his brain leaps from her batting doe eyes to the bales of golden wheat her farm produces, which will result in masses of money. Not sure how legit that is — not familiar with the economics of this time. One tribble in the grain elevator and Crane’s dream goes up in smoke. So minus points for switching motivation partway through the story. He doesn’t even know if Katrina can make toast.

Character Strengths: Many and varied. Crane is intelligent, crafty, and sneaky. He plays the town’s ladies so he can get invited to dinner and filch their vittles. Plus he’s got better sleight of hand than David Copperfield pulling David Blaine out of Penn Jillette’s pants. True, it’s usually used for sneaking food, so minus points for lack of ambition. On the other hand, you can’t fault the guy for staying true. The heart wants what it wants. And it wants turkey.

Evilness: The worst kind of evil is the kind you don’t know is evil. Ichabod Crane is misogynist, greedy, and shallow. We’re fooled into thinking that he’s a humorous goofball because most of the comic relief involves food. Just forget that he’s actively stealing from the townspeople he’s here to help. He’s not looking for a good wife, he’s looking for someone who makes a good pot roast. Which makes his pursuit of Katrina doubly insincere. Now he wants pot roast AND the fortune of the farm her father will finally foist on her feminine figure. (Why am I alliterating so much?)

Tools: Now I ain’t saying Crane a golddigger, but he ain’t messing with no brain bigger. His whole M.O. is to exploit the town, mostly the womenfolk, into giving him treats. Nobody’s bright enough to suss this out. And once he’s gotten what he wants, he’s gone. Also, he’s inexplicably lucky, but that bites him in the bony ass later.

Complement to the Hero: By today’s standards, we’d consider Brom Bones a bully. He’s beefy, not too bright, and spends his time with friends instead of highbrow hobbies (much like a precursor to Gaston). He likes pranks and mischief, but only in a Bart Simpson way. His first real act of malice is making a dog howl outside Ichabod’s music lesson (played for comedy). And yes, he’s not terribly considerate to women of size.

But look hard at his actions during the cartoon. He opens up a barrel of beer for his friends (and some dogs). Unlike Ichabod, he has the skills that people valued during this time (credit to Washington Irving for this). He’s boastful and loud, but also unselfish and civil. Whereas Crane is a schoolteacher. No one needs that in this time and era. They need Davy Crocketts, not Jaime Escalantes.

Fatal Flaw: For some reason, despite all his intelligence, Ichabod Crane is superstitious (maybe to the point of OCD?). He’s savvy enough to avoid the black cats and pick up the horseshoes. But when Brom Bones sees him throwing spilled salt over his shoulder, he gets the idea how to bump Crane out of Sleepy Hollow.

(Side note: Bee-tee-dubs, what is Katrina’s deal? She keeps engaging Ichabod Crane for, what looks like, the sole purpose of making Brom Bones jealous. Even within the comic scene where Brom keeps running into things, she’s revelling in the attention. Does she have reason to make him jealous? To make him get off his ass and pop the question? Is she just doing this for shits and giggles? Is SHE the real antagonist here?

Method of Defeat/Death: After Brom tells his tale (which would be a hell of a lot scarier if Bing Crosby wasn’t singing it), Ichabod rides slowly and shakingly through the deep dark woods. After several jump scares (not including the standard yowling cat), the headless horseman appears behind him. A long chase ensues, in traditional Disney style, until Crane sees the bridge, which he knows as the safe point. He rides across, but the horseman throws his pumpkin head (not “that” Pumpkinhead).

In an epilogue, the narrator declares that all they found was Ichabod’s hat and shards of gourd. Some say that Ichabod left and got married (which we see in an “is-it-real?” flash forward where he’s surrounded by a PAWG wife and ugly, ugly children. But at least he’s got a big-ass turkey in front of him).  Brom Bones also gets married to Katrina.

Final Rating: Two stars (one extra for flying under the radar)