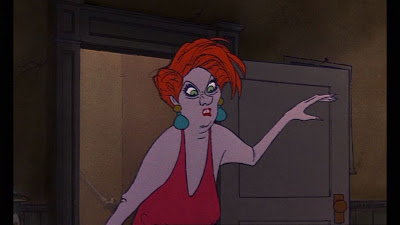 Man, I thought I had seen some ineffective villains with Edgar and Madam Mim. But this one is ridiculous. She’s Cruella De Vil’s sister and precursor to Ursula. And lady, put a BRA on. It looks like you’re practicing soccer thigh kicks. And who names their kid Medusa? Did she have a brother named Adolf Osama? Was there anything good that came out of Don Bluth’s time at Disney?

The movie’s bad enough as it is. It’s 77 minutes, and there is SO much filler — montages of nothing happening while gentle, hippie songs play. The opening credit sequence doesn’t even have any animation, just still images that pan around. Talk about a budget buster. I expect that kind of thing from a Snoopy movie, but not from Disney. And Medusa barely has any screen time. She doesn’t even come in until half an hour through. And while she acts mean, the only people she could scare are two-to-four-year-olds (which she succeeded in, as my daughters will attest to).

Motivation: Simple greed. She wants a big diamond. The giant box of regular-sized diamonds and gems that could satisfy her financially for the rest of her life simply won’t do it. She needs The Devil’s Eye, which is about as big as… well, as an eye. Of course, it’s never explained why she wants it, or what she intends to do with it. She has no back story and no front story. She simply exists to be an antagonist. She’d be better off as a DuckTales villain.

Character Strengths: Penny freezes when she looks into Medusa’s eyes. That seems like the sign of a strong personality. But the only person we ever see her interact with is Mr. Snoops, her punching bag. Seriously, haven’t the Jews had enough to deal with? But she’s also a small-business owner (keep that economy growing, sister). She’s patient and stubborn though, and will do anything to get what she wants, including kidnapping a little orphan girl and forcing her down into a well where she could drown.

Evilness: See above-mentioned “kidnapping a little orphan girl and forcing her down into a well where she could potentially drown”. Of course, without the motivation, her cruelty falls flat. Why this orphan? Why did she kidnap her in New York then take her all the way to Louisiana? They don’t have orphans there? Also, she leaves a kidnapped nine-year-old girl alone with a wretched, schlubby man in his forties. Shudder.

Tools: She has a swamp vehicle that she drives badly. The thing fits in better with a steampunk setting, not 1977 bayou. There’s a store of fireworks in her base — a shipwrecked paddleboat — and of course this bites her in the ass later on. And she has two bloodhounds alligators which she uses to recapture the orphan girl when she escapes. And somehow she can stop them from eating said girl. Then she’s got Mr. Snoops and who knows what their relationship is. I always thought he was her lawyer.

Complement to the Hero: It doesn’t get more terrible than this. What does a vampy treasure hunter have to do with a pair of mice? What does anything have to do with anyone in this movie? There are featured characters like the Cajun rodents that don’t even have lines until the last fifteen minutes. Why did they let a superstitious janitor go on a life-or-death rescue mission? How did this become one of Disney’s more successful movies?

Fatal Flaw: The whole problem with Medusa is that she’s a ninny and I blame the movie for that. She has two pet alligators, but she’s scared of mice. She uses disposable workers to get where she can’t, but in a completely impractical way (she has to grab her from New York, then fly down to bumfuck Louisiana). She has a gun, which she shoots several times into Mr. Snoops — he’s literally shot point-blank by a shotgun and nothing happens to him. Then she uses the same shotgun to threaten him (and Penny) when she’s escaping with the treasure. How is this happening?

Then, like The Aristocats, she’s defeated by some zany, madcap “Three Stooges” routine involving small animals. The last we see of her is her climbing a smokestack while her alligators have a sudden taste for her? WTF? Where did this face heel turn come from?

Method of Defeat/Death: See above. Some animals attack, set off the fireworks, and they all get away on Medusa’s swampmobile. Medusa’s clinging to a post while her alligators wait below. And what fate is she in for when her strength gives out? Why did her alligators betray her? And how did they get out of the cage? And I forget what happened to Mr. Snoops. Uncinematic and dry as a bone. As lifeless as the rest of the movie.