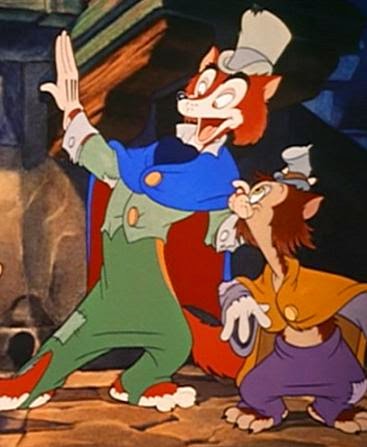 This movie’s got four different antagonists and they all get equal screen time. None of them stand out, none are related, and none of them are particularly threatening. But they all play a part in Pinocchio’s quest — to gain moral fiber. So I decided to try a quadruple threat match.

Motivation: Monstro is probably the most memorable — he gets his own level in Kingdom Hearts — but he’s a being of nature. He doesn’t do anything out of malice, just instinct. Honest John and Gideon are the Laurel & Hardy of street swindlers, a la Fagin and his bunch, although they’re more malevolent (child trafficking). Stromboli does it for the accolades (and I can only assume puppetry was more popular back then. Nowadays all we got is Jeff Dunham). I’m not really sure what the Coachman wants. Pleasure Island’s got to be a lot more to maintain than anything he could get from selling donkeys. Why doesn’t he just go into breeding? I have a bad feeling he’s not doing this for the money.

Character Strengths: Well, let’s start with the easy one. Monstro is a big frickin’ whale. He can swallow people whole and keep them alive for months with the fish he eats. It’s handy when you’re part kaiju, part prison cell. (Con: vulnerable to Heartless).

Stromboli and the Coachman don’t seem to have any outstanding characteristics, but no glaring weaknesses. Aitch J and the Giddy aren’t the brightest bulbs in the chandelier. The Coachman demonstrates dominance over the two, and Pinocchio escapes their scams both times. I have a feeling they could be suckered in by their own con game.

Evilness: I think the Coachman wins this hands down. One’s just a pickpocket, one’s an animal, and one’s an entertainer (see Sander Cohen). But the Coachman is literally taking kidnapped boys to a private island where they indulge in sinful activities that turn them into donkeys. And he’s doing this for no real gain. In fact, at several points, he is implied to be the devil, and his M.O. reinforces that.

Tools: Honest John doesn’t have much but his cunning and connections. Stromboli’s got strength on his side (although you don’t need much to be stronger than a marionette, no matter what those Puppet Master movies say). Props to the Coachman for somehow keeping an entire island stocked with cigars, alcohol, candy, roller coasters, destructible artifacts and buildings.

But Monstro is a big fucking whale. He can swallow whole people and keep them alive for years in his belly (despite that this ends up his undoing). Maybe it’s my appreciate for Moby Dick, but you just can’t beat the Godzilla of whales.

Complement to the Hero: I think it’s fair to say that all four enemies are fairly strong in this category. Each has a purpose in the plot to teach Pinocchio some kind of lesson about ethics. They each play a part in tempering the little wooden puppet into a real boy. However, it’s not like they all represent some sin or ethical dilemma.

I guess you could make a case for a few of them. Honest John discourages Pinocchio from going to school. He shows that book smarts have more value than street smarts, because the teachers of street smarts aren’t in it for your benefit. The Coachman teaches that a life of vice and indulgence only turns you into a jackass. Stromboli demonstrates the power of greed and vanity, but I’m not sure how much Pinocchio picks up from this. And I’m not sure what Monstro represents. Maybe something about wrath, although I don’t think Pinocchio has an angry bone in his body. (Does Pinocchio have bones? Or splints?)

Fatal Flaw: The only character that experiences a downfall is Monstro. The rest escape their karma. No comeuppance for J. Worthington Foulfellow or the Coachman. Stromboli loses his star performer, so I guess there’s something there. Monstro smashes into a giant cliff trying to eat Pinocchio and Geppetto, but he seems fine a few frames later. Not like a whale corpse washes on shore somewhere. Maybe it’s the world itself that’s the true antagonist.