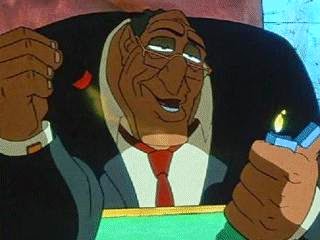 The 1%. Others based on pre-modern works (e.g., Claude Frollo or Captain Hook or Ratigan) are impossible to separate from the original, they don’t call it a “loose” adaptation for nothing. Let’s see what we can do.

Motivation: Money. To be more specific, what he’s owed. What he was thinking lending money to a worthless bum like Fagin in the first place, I’ll never know. Seems very story-serving to me. I mean, come on, his army of pickpockets is a bunch of stray dogs. Why does a guy like Sykes give a crap about a bum? Even the seediest loan shark would raise an eyebrow. But he’d probably still do the deal, because, hey, seedy loan sharks.

Character Strengths: Like Dickens’s “Bill Sikes”, this guy has almost no redeeming qualities. None that I can see, at least. His character is developed in such a way that he has no humanity in him, which makes him not such a good villain in my eyes. Too much the comic book, rule-the-world-for-no-good-reason type. I wonder what would happen if he and De Vil formed a merger?

Evilness: Sykes is part of a line of a collection of Disney villains like Madame Medusa and Cruella De Vil who A) kidnap children B) use firearms C) feature impatience and greed as primary characteristics D) have animals as their primary enemies. I have to give credit, though, for using those tried-and-tested mafia torture techniques like cement shoes. Antiquated as it is, you don’t usually see that level of violence in Disney.

Tools: Unless he had two Dobermans, his presence in the movie would likely be minimized. Roscoe and DeSoto (no idea where those names come from) are the active muscle while Sykes sits in his limo and smokes cigars. I think these characters actually have more presence, in a way. Here’s my question — why does he bother staying in the shadows when we can see his face anyway? Either stay hidden or don’t.

Complement to the Hero: Um, no. One’s a mafia crime boss, the other’s a cute orange kitten. The interesting part here is the role reversal. In Oliver Twist, Bill Sikes is one of the pickpocketing underlings. The Boba Fett to Fagin’s Darth Vader. He does become the big bad of the story, and dies in a similar vein. But there’s no comparison.

Fatal Flaw: Letting his rage get the better of him. I mean, come on, the only reason he would wreck his limo, kill his two dogs, and commit suicide to get Fagin would be if you’re an idiot, or you’ve got more rageahol than Joe Pesci at a clown convention.

Method of Defeat/Death: Fagin has a change of heart and rekidnaps Penny. A car chase ensues (side note: Sykes drives his own limo?) onto the subway/train tracks. The pets fight the dobermans, until they both fall off and are electrocuted (hot dog!) A speeding train heads toward them. Sykes is smashed to oblivion and Fagin avoids it because… his grocery cart-motorcycle can jump? Kinda graphic, but I like to imagine he got reincarnated as Carface from “All Dogs Go To Heaven”.