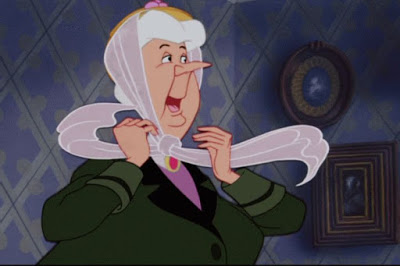 This is a hard one. This is a romance story — there’s no real villain. Lady encounters a few different obstacles, but no stand out antagonist. Jim Dear and Darling neglect her for a while, but then that stops. The Siamese cats are only present for one scene. Tramp acts as her villain when his selfish side comes out. A rat shows up for the climactic battle, but plays no role in the plot. And a dogcatcher presents himself as the last obstacle. The conflict comes from the two different worlds. Like Saturday Night Fever or Silver Linings Playbook.

Motivation: She seems like one of those Dolores Umbridge types — snooty, harsh, insensitive, overbearing, and above all, British. That means she’s going to run the house the way she wants, despite the established rules. Because those young people just don’t know any better.

Character Strengths: If you can say anything, she’s decisive. She believes she’s acting in the best interest for the baby. Which is noble, I guess, unless you’re the dog. Despite her unlikability (who’s sister is she anyway? She looks pretty old.) she’s trustworthy enough not to burn the house down.

Evilness: Does it count if the evil traits aren’t intentional? Clearly, she believes dogs do not belong near a baby (probably due to growing up around high infant mortality rates). But cats are okay despite the many old wives tales about them (racist cats, double). And the cat food doesn’t fall far from the tree. Her poor, sweet babies make mischief, shift the blame to lady, and get coddled. The end result is that Lady is forced to wear a muzzle, which too closely resembles a Hellraiser torture device. How’s a girl supposed to eat?

Tools: Aunt Sarah isn’t really trying to do anything, so I hardly can call Si and Am tools (unless you count their earworm song). All she needs to do is make sure the little yuppie larva is still breathing.

Complement to the Hero: I’m not sure what to say. Lady’s a dog. Sarah’s a human, but not Lady’s owner. I can say that characteristics of Lady are missing in Aunt Sarah. Lady is sweet and romantic and ladylike (hence the name). Aunt Sarah is a cow. But they have no real relationship to each other.

Fatal Flaw: Nice kid. Baaaaaaaaad judge of character. A rat sneaks into the nursery while Lady is chained up. And Aunt Sarah ignores the distressed barking, meaning Tramp has to sneak in. Don’t tell Mom the babysitter’s stupid. (BTW, what evidence do we have the rat was going to hurt the baby? All it was doing was looking in. Talk about circumstantial evidence.)

Method of Defeat/Death: Nothing really happens to Aunt Sarah. Jim Dear and Darling come home, discover the dead rat, and Aunt Sarah realizes her mistake. At the end, she’s even sent a Christmas gift to the dogs. I love a good redemption story. Just not this one.