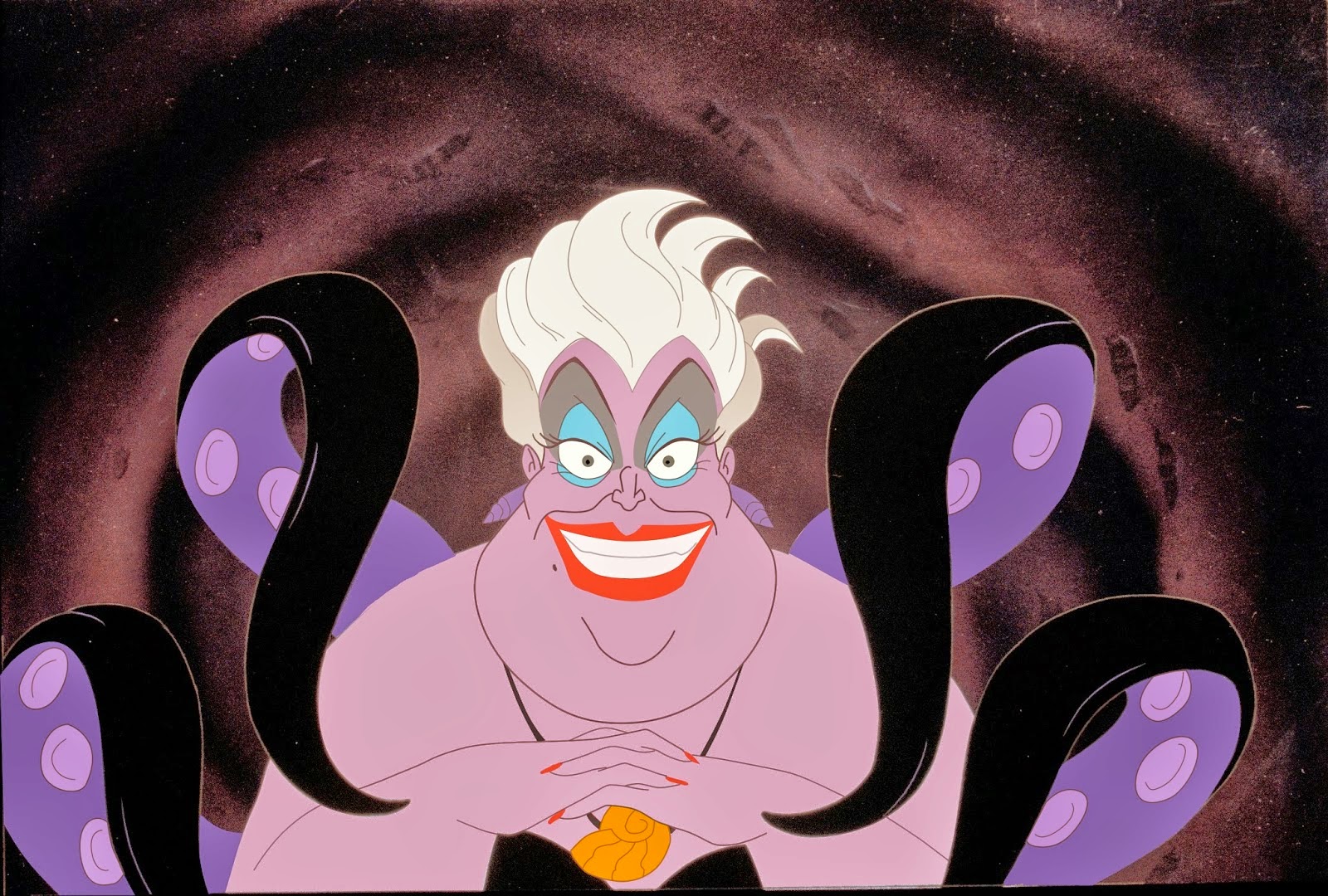 Ah, the beginning the Disney Renaissance. A time of renewed hope and ambition. A time of threat that Don Bluth is eating into profits.

Motivation: In the source material, the sea-witch’s sole purpose is as a business broker. But here, she’s out for vengeance. Triton apparently banished and exiled her (for reasons unknown — trivia and sequels aren’t canon in this analysis) and wouldn’t she love to wreak havoc on his youngest daughter. A pretty good way too. Why make the object of your ire suffer when you can get a two-for-one? My only complaint is, like other Disney villains, I would have liked a little more background into the reason for her banishment. But I think we can surmise that it has something to do with black magic.

Character Strengths: Ursula has no sense of justice. She has enough knowledge and cleverness to make Faustian contracts her primary tool, even above sorcery. The contract also prevents any backtracking or brute force approaches, as when Triton tries to explode it. I want to know where she gets her parchment from.

By the way, props for her to sticking to the spirit of terms. She could have “Twilight Zone”d her easy. Ariel just asked for legs, she didn’t specify what kind. Lots of things have legs! Spiders, squid, lobsters, giraffes, elephants, platypuses…

Evilness: She eats things with a face. I think under Atlantican rule, this is considered cannibalism. Although, I do not see how they could live on seaweed and kelp to keep up the metabolism needed for a mammal to live on the ocean floor with that little body fat. If you can’t consume anything on the evolutionary ladder above oysters, you’d have to be a garbage disposal.

But I’m getting off track. The most evil thing about Ursula is that she has a nice blend of flavors — jealously, greed, sloth, lust for power. But they’re all tempered by her desire for vengeance. She has no compunctions about ensuring her success through underhanded means, such as when she tips Eric and Ariel over in the boat, and then inserts herself as a second contestant in The Dating Game. If this was a more realistic movie, she’d have no problem — what boy declares true love after three days? (Although, Ariel could have written a message in the sand and ended it even earlier. But then where would we be?)

Also, I should note that Ursula’s contract is not the most airtight (Ariel’s a minor, a contract with a known criminal, not acting in good faith, and so on…). But this is movie magic, so I’ll allow it. It’s not like they had a modern legal system back then. I bet even Prince Eric had a pillory in his courtyard.

Tools: Eight arms can be handy (or are they her feet?). She’s got a tidy home inside a Leviathan’s skeleton that includes a hallway featuring all her past conquests (and there are quite a few). After that, you enter her chambers where she has an assortment of potions, a personal vanity, and a giant bubbling cauldron. For henchmen, two electric eels that have eyes she can see through (and she’s surprisingly kind to them). She even has enough savvy to use the trident for more than just blasting stuff (or is she using black magic there? I was under the impression she needed the trident to get big.)

Complement to the Hero: Ariel is little, thin, powerless, and naive. Her greatest strength is that she’s stubborn. When she wants something, she will go after it. Ursula is larger than life, boisterous, clever, and incapable of love. It’s delightful to see her reaction when she wins. Twice, even: one when the sun sets, and the other when she picks up the trident. She doesn’t even expect it. Weirdly, this causes her to get even more psycho.

Fatal Flaw: Ursula exhibits some of the same loyalty to her friends that Ariel has, interestingly enough. When her “poor little poopsies” are accidentally killed, she goes blue screen of death and unleashes the kraken. The problem is that means you’re an easier target. The bigger they are, the harder you fall. And that’s a bad thing when you’ve pissed off not just one kingdom but two. Even the best sorcerer will fall to a knife between the shoulder blades. Or in this case the prow of a ship.

Method of Defeat/Death: Prince Eric fetches his girl from the clutches of evil, which results in the zapping of Ursula’s two slippery hench-eels. Enraged, she becomes fun-sized and creates a giant whirlpool. The whirlpool dredges up some sunken ships, one of which Eric climbs onto. Ursula spots Ariel and zaps the rock she’s clinging to. She falls to the bottom of the vortex (a straight drop from sea level to ocean floor — shouldn’t that kill her?)

After a few potshots, Eric rams the galleon into her chest. And is simultaneously struck by lightning. She kinda shrinks, kinda explodes, and turns into a million octopus crumbs that rain down on the poor unfortunate souls turned into seaweed, which brings them back to life.

Is there supposed to be some irony in this that I’m missing? Some symbolism or motif in the villain’s demise? It’s cinematic, sure, but our protagonist doesn’t get to strike the final blow. Her linebacker boyfriend does it for her.