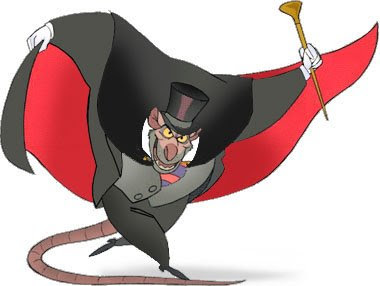 Or Professor Padraic Ratigan to his friends. Of which he has many. It’s pretty easy to have a good villain when you’re simply lifting one of the greatest, already existing antagonists in literary history. But adding mouse ears and Vincent Price’s voice goes a long way towards making this one of the most underrated villains in Disney canon.

Motivation: Ratigan doesn’t want money — he already has a bunch — nor vengeance nor escape. He wants power. Why? I’m not sure, other than it would be cool to put on his resume. He seems to have a problem with his lot in life — a mastermind condemned to the sewers because he’s a rat big mouse.

And on the plus side, he’s not a one-dimensional Lex Luthor — he has a backstory with Basil, the Sherlock Holmes expy, and we know his past crimes have made headlines. It’s just too bad we never get to see any of that. But kudos to Disney for extending the story to something that exists outside of what’s presented.

Character Strengths: Not only can he play a classy harp, but he’s obviously an analytical genius. He can extrapolate, deduce, and predict with the best of them. It’s really too bad he’s stuck with cartoonish flights of fancy, because he could really do some damage to the human world.

He’s really quite well-liked in geek circles and I didn’t know why until I saw the movie. Then I figured it out: he’s the Joker. A criminal talent whose prone to fits of psychosis, maniacal laughter, and displays of grandeur. Just like the Joker he knows he’s the bad guy and he loves that.

Evilness: Good marks here too. On the surface, he’s got charisma, style, and a track record. Make one mistake and, after a near psychotic break, he’ll calmly call for his “you have failed me for the last time” henchcat, Fluffy. Which, to a tiny mouse, would be the equivalent of summoning Cthulhu at the ring of a bell.

Plus he has one of the best villain songs I’ve ever heard. All his characterization takes place in that one number. And not just from telling, but from showing.

You can tell Ratigan is a different villain from Maleficent from their animations alone. Maleficent is always very stiff, like a pillar or a wall. Her facial expression rarely changes. But Ratigan is all over the place — dancing, swishing that cape, making faces that make his eyes bug and his teeth gleam. Also, did that song say something about drowning widows and orphans?

Tools and Powers: Ratigan’s got a lot in his pocket — a gang of thugs and lowlifes, the whole of the underworld in his palm, a bat with a nightmare-fueled voice — but I think most of his game is all talk. Sometimes it works — he made a great ploy to lead Basil to his death trap, but then he does the Bond villain thing where he fails to kill the hero, monologues, then leaves.

He talks a big game about his most “fiendishly, diabolical, clever plan yet”, but it’s to replace the mouse queen with a robot (a robot for 1897) that will name him as the new all-powerful ruler. And it’s not even him inventing the robot — the toymaker he kidnapped is doing all the planning and implementation. I’m not sure whether this characterization is intentional or not, to show Ratigan’s real impotence. But for what it’s worth, it’s good villainy.

Complement to the Hero: I don’t think I should give as much credit here as one should, since this isn’t based on original material. Yes, there’s a great yin/yang here, but it’s really no different than what occurred in Sherlock Holmes, even with the personality shifts. However, I do like what Disney did by adding the more calm Basil to the raging Ratigan, especially during the climax.

Fatal Flaw: And to that end, the divergence of personalities is what’s responsible for Ratigan’s downfall. Although I’m not sure what he was thinking with creating a steampunk dummy of the queen. I mean, seriously, no one was going to question this? The thing’s wired into a loudspeaker. It can’t move. Ratigan’s schemes come with a heaping dose of mad scientist that never bodes well for success. The design of his big, thick death trap is composed of several smaller death traps. Which is the very thing that allows the hero to escape. Any one of those implements would have done the trick.

Method of Defeat/Death: With his plot foiled, Ratigan escapes via pedal-blimp to Big Ben. Basil pursues him where they have a harrowing chase through the gears to the clock face outside. By this time, Ratigan’s worked up such a rage that he resembles a tiny Incredible Hulk. He furiously claws Basil with violence unprecedented in a Disney movie, pushing him until he hangs off the minute hand by a hand.

Ratigan rears up for the final blow, following all the cliched camera shots, as Basil’s friends in the balloon hover nearby to catch him, Ratigan strikes… And it works. Even Ratigan can’t believe it. Except Basil’s hanging onto the crashed pedal-blimp, just as the clock chimes and Ratigan falls off. But not before grabbing onto Basil’s pants. They both tumble into the smoky London night, screaming their last.

Except Basil, who was still clinging to a bit of the blimp’s propeller that he uses to float back up to his friends.

Cinematically, not bad. I like playing with the tropes, the homage to the original Holmes/Moriarty final battle, and Ratigan’s animalistic psychopath moves. However, there’s something to be said for the ultimate cause of death. Mice can climb up walls. I find it hard to believe Ratigan’s sense of balance is that bad he could fall from the bell ringing. I know it’s supposed to be a callback, but it just doesn’t work. It’s not related to character or events. Plus, how hard would Basil have to pedal to get his helicopter back up?