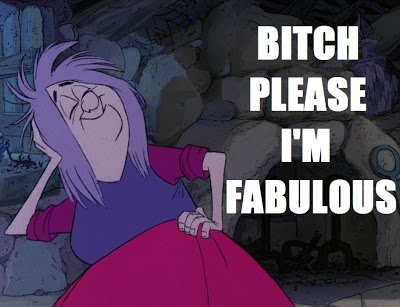 The Sword in the Stone is interesting because the plot line has no real good vs. evil arc as most Disney movies do. Instead, the story is about growth, about the evolution of a small, wimpy boy being taught courage, wisdom, and strength. The value is put on education, not defeating the bad guy. That being said, there are obstacles to Wart’s goal. I would describe Sir Kay and Ector as the film’s antagonists, as they are the primary obstacles to Wart getting what he wants (hanging out with Merlin and getting an education). However, that does not mean they are the film’s villain. I believe that person is the Mad Madam Mim.

Motivation: Mad Madam Mim is a little bit like the archetype evil witch in that A) she lives alone in the woods and B) likes to kill little children. But she has no overarching desire or backstory. Once she learns Wart’s connection to Merlin, she tries to kill him, but why? Maybe Merlin’s her primary target, but she sure isn’t doing much, sitting in the woods with her cards. And what does she intend to do afterwards? Good stakes (the loss of the protagonist), but no root cause. Her scene could be drastically changed or removed without upsetting the movie.

Character Strengths: Merlin’s animosity toward Mim is that she uses “trickery” instead of real magic. What the difference is, I have no idea. Their skills seem evenly matched, although all we ever see them do is change into animals. I guess they were using my four-year-old’s Big Book of Animals for a spellbook. (For a real wizard’s duel, try “The Raven”, starring Boris “Cannonball Foot” Karloff vs. Vincent “The Nice” Price). Mim uses deceit and lies where Merlin uses cleverness. And it works for her. But like all lies, only to a point.

Evilness: Meh. She’s more comic relief than anything — one of those villains who takes being called horrible and ugly as a compliment, looks like a frumpy grandma, and then sings a song about how she’s so great. I feel like she should be off somewhere else, fighting Smurfs. If she came to my doorway, I wouldn’t be terribly scared. I’d be wondering if she brought me cookies.

Tools: It’s hard to argue with magic powers, but it looks like they don’t deviate much from transfiguration. If she is Merlin’s equal, she must have more than that. But we only see what the movie shows us. So except for killing a flower and some neat sparklies, I’m pretty sure I could whack her from behind with a baseball bat.

Complement to the Hero: Mad Madam Mim apparently has some past history with Merlin, but not Wart, who is the protagonist. Minus points there. She doesn’t appear until Wart flies through her window, and has less than ten minutes of screen time. At no time does she ever come into real conflict with Wart or have a crossing of goals. She is not an obstacle, she is an enemy of convenience.

Fatal Flaw: She seems to have a penchant for games — when we first see her, she’s playing solitaire. She gives Wart a “sporting chance” to escape her when she tries to kill him (she turns into a cat when he’s a bird). And finally challenges Merlin to a wizard duel (in a very contrived way), which ultimately leads to her defeat. I must admit, I kinda like this, the “downfall by hubris”, biting-off-more-than-you-can-chew, hoist-by-your-own-petard fatal flaw. In the process, she (and also the audience) learn that “knowledge and wisdom is the real power”.

Also, not a strong immune system. Must be from living with all that dust.

Method of Defeat/Death: Mim sets the rules for the Wizard’s Duel (no relation to Harry Potter) and they both chase each other up the evolutionary ladder until Mim becomes a purple dragon (breaking her own rule). Merlin, instead of taking the bait and becoming something bigger (though dragons are assumed to be apex predators), goes the opposite way and becomes a germ. (Except Merlin just broke the rule too: they can only turn into animals, but bacteria belong to a separate taxonomic kingdom from Animalia.) Sick in bed, Merlin leaves Mim with her red spots and hot’n’cold flashes. Apparently, he wants her to get back up and kill him later.