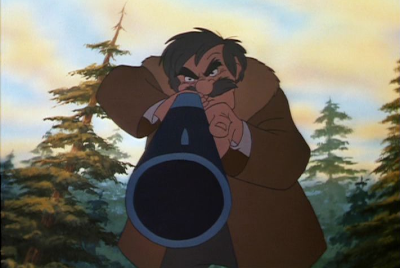 The Fox and the Hound has the distinction of being the crossroads of the old guard (Disney’s Nine Old Men) with the new guard (Don Bluth, Frank Thomas, John Lasseter, Glen Keane, Brad Bird, and others). Unfortunately, this crossing meant lots of conflicts. This is the movie that motivated Don Bluth to start his own studio, with a bunch of similarly disgruntled Disney animators, that held its own for a few years. Of course, none of this has anything to do with villains, it’s just interesting.

I’m not sure how a villain like Amos Slade would play out these days. Probably get a lot of flack from hunting associations, dog owners, and PETA. He’s not really a bad guy or an evil guy. In fact, maybe the real antagonist is society. Because Copper gets turned into the extension of Slade. And in the end, Copper and Tod both go separate ways and live separate lives, never to see each other again. Does that mean prejudice wins? 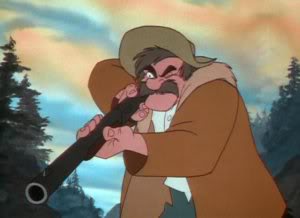 Motivation: Amos Slade likes hunting, and he likes being able to hunt. If you want to go beyond that, I guess you’ll have to consult a hunter.  Because I, a well-fed midwesterner, cannot comprehend why someone would want to get up early in the morning to sit in a tree and wait hours and hours for a cute animal that may or may not come so you can kill it. (They have frozen meat at the supermarket, you know.)

Maybe it’s natural urges or the feeling of power, but if he doesn’t get to hunt, he gets cranky. And that damn cutesy-wutesy fox makes things difficult when he befriends his future hunting dog, then almost kills his current one. 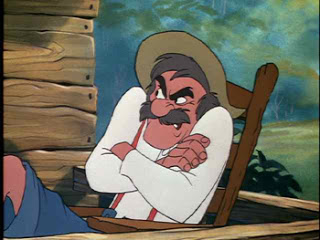 Character Strengths: Slade’s good with his gun, better than Clayton (from Tarzan) at least. Other than that, his skills are limited. I can’t imagine his resume has a long list of skills or work experience. It looks like he lives on his own with little dependence on others. Not even sure he has a job — he seems to live off the land. Although most of the time, he’s sleeping in a hammock in his long johns.

Evilness: Now, look, I’ve already said that I don’t get hunting. But I don’t believe hunters or hunting are evil. Hell, Disney is partially responsible for deer overpopulation (more on that when I get to Bambi). But the taking of another’s life for your own gain, when you don’t really need it — that’s a little bit wrong.

Slade’s real evil comes from his pig-headedness and intolerance. He believes that hunting is a way of life and if you’re not predator, you’re prey. But his real motivation for why he breaks into the sanctuary to find that fox is petty revenge. 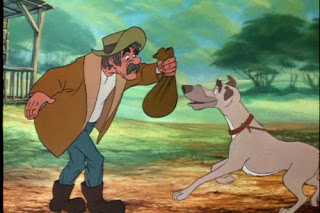 Tools: The nice thing about Slade is that, besides his gun, his greatest tool is also the movie’s protagonist. With Chief out of commission, Slade raises Copper as his primary hunting dog, who gleefully accepts the mantle of bloodlust. It’s a nice touch, story-telling-wise. Sadly it’s not quite epic enough. I guess I’m spoiled by watching Darth Vader shooting laser ships at everyone, but Slade doesn’t have much to work with. 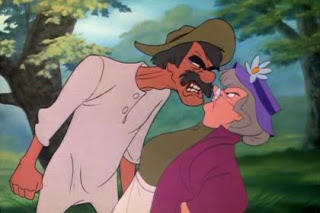 Complement to the Hero: This is a hard one, because I can’t determine who the hero is. I guess Tod, because he’s the primary protagonist. He’s the one we start and end with. But he and Amos don’t share an origin story (that’s Tod and Copper, as they’re both adopted as young’ins).  They’re not after the same thing.  And they don’t represent two sides of the same coin. Slade is one of those villains that floats out there just to be mean. 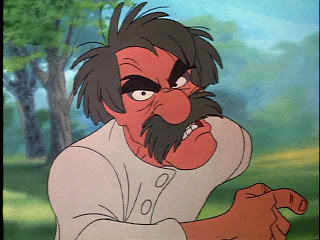 Fatal Flaw: The thing that gets Slade in trouble is his self-righteousness and lack of respect for the rules. When he goes hunting in the animal sanctuary, there’s a reason that barrier’s up. But his pride demands that he seek vengeance.

Also, not good with bear detection. 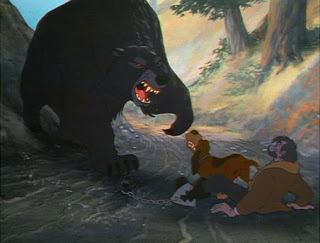 Method of Defeat/Death: While hunting down Tod, the group gets attacked by a bear. After Slade misses his shot, which makes the bear madder, Copper attacks the bear. Tod does too, which ends in them both falling down a waterfall.

We never see the bear again, but Tod, weakened, resurfaces right in Slade’s crosshairs.  However, Copper jumps out in front, refusing to let him take the shot. Slade learns his lesson, and he goes back home, having been defeated by the power of friendship. 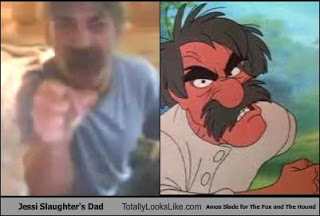