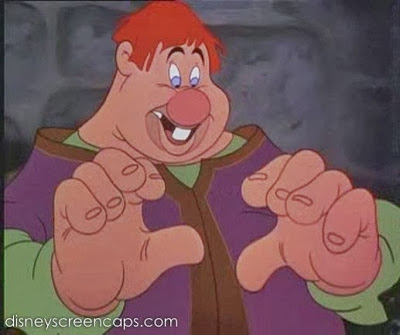 Origin: Mickey and the Beanstalk (from Fun and Fancy Free) (1947)

I wanted to do at least one fun villain — one you don’t expect too much out of. That honor goes to Willie the Giant, the lovable giant most known for his role in “Mickey and the Beanstalk” and “Mickey’s Christmas Carol”.  I think he existed in a prior incarnation in “The Brave Little Tailor”, but it’s not canon so I can’t count that.

Also, he rolls a doobie in that cartoon. And this is supposed to be for kids.

Motivation: Like in the fairy tale, Willie has an ill-gotten golden harp. In “Mickey and the Beanstalk”, this harp possesses the power to keep Happy Valley happy, though the giant remains ignorant of that fact. He keeps it locked in a box, presumably to hear its pretty music.

Character Strengths: Even though he’s as dumb as he looks, Willie is surprisingly charming. As he bumbles around the castle singing his little “Villain Song” that explains his powers, you can’t help but fall in love with the guy as he muddles through those hard words. He forgets the order of “Fee Fi Fo Fum” and the song falls apart. He’s like an overgrown henchman who got out of the villain business and got his own place.

Evilness: Not very. They never really explain much about him — why he wants the harp, where he got his powers of giantitude. As Mickey demonstrates, he can be easily duped with a few quick words. The problem is he can sometimes figure out your game. And only God knows what he was going to do with Mickey, Donald, and Goofy once he locked them up. Play Disney Infinity?

Tools: Here’s a strange one. The giant — if being impossibly, foot-crushingly huge wasn’t enough — also has powers of invisibility, shapeshifting, and flight. Here’s the funny part? When does he use these powers? Never. He never uses them to stop the hero or put obstacles in his way. Why does he have these powers? What good do they do when you’re already a giant?

The one time it figures into the plot, Mickey tries to get the giant to turn into a teensy-weensy fly so they can swat him a la “Puss in Boots”. And when they’re about to squash him he turns into a nice pink bunny rabbit.  What a cad.

Here’s a funny thought. If he had turned into a fly, would he have been fly-sized by Mickey’s standards or by the giant’s standards? Was Mickey about to hoist his own petard by taking on an insect as big as him?

Complement to the Hero: Mickey is a quintessential character, so his true foil is someone like Pete or Mortimer. And sometimes Sephiroth. Willie the Giant is no match for someone so iconic. He’s just a pretender to the throne.

Method of Defeat/Death: Escaping with the harp, our heroes manage to tie Willie’s shoelaces together to facilitate their escape. As Mickey rushes down, Donald and Goofy start chopping down the beanstalk. Willie tumbles off and falls to a presumably squishy death, as his own weight crushes him.