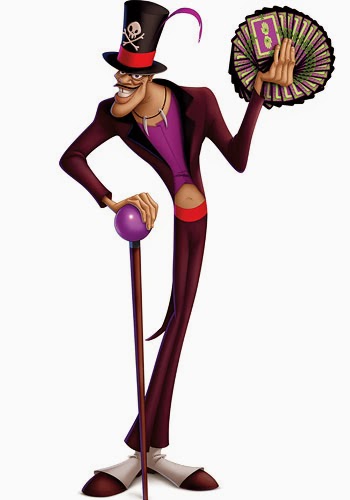 DR. FACILIER
(a.k.a The Shadow Man)

I’ve been putting this off because I just can’t get my head around Dr. Facilier. First of all, he’s not the villain for the protagonist, but the deuteragonist: the hero’s buddy/love interest. I can’t think of any other Disney movie where the villain isn’t in direct opposition to the hero. Maybe Oliver & Company. Also, he just appears out of nowhere. Established, but connectionless. But he has a cool appearance and cool powers. There’s been plenty of witchcraft/black magic, but never something as niche as voodoo.

Motivation: He says he wants money. He’s tired of watching the big people in their fancy cars and old fortunes trouncing around the streets. But then when he’s talking to his “friends”, he also expects to rule New Orleans and offer up souls.

The stakes are less significant though. When Prince Naveen enters his establishment, he strikes a deal with his disgruntled crony. Said crony gets a voodoo charm to transform him into the prince (but not his voice, for some reason. Should have gotten together with Ursula.) However, this plan fails, he goes back to… whatever back alley he came from. At least until he makes his Faustian bargain with the voodoo spirits. But we don’t know the stakes for losing that until they’re pulled.

Character Strengths: A talented singing voice and lips to die for. No, just kidding. He appeals to the needy and curious, looking for a good time. Like many New Orleansians do. And there is something to his showmanship — it pulls people into his xanatos gambit. He’s as good at sleight of hand as Penn & Teller, making you think of a different kind of magic (otherwise, he wouldn’t be much different than Ursula).

Evilness: Dr. Facilier looks evil. And anyone with Doctor in front of their name gets +2 to intimidation. However, the acts he performs don’t evoke any images of cruelty or ignorance. He is manipulative and selfish. But, in general, harmful? No. He turned people into frogs. That seems like a weird thing to do. And the spell had a side-effect that anyone who kissed the frog became one? I think maybe he read the book wrong.

Tools: He’s got friends on the other side. Didn’t you listen to the song? His voodoo powers are colorful and potent. But the interesting thing is there’s a catch — he can’t conjure anything for himself. This never really comes up in the plot, it’s just a limitation. So that means he’s got to wait for opportunities and use those “poor unfortunate souls” (why do I keep bringing Ursula up?) to get what he wants. Plus he’s got his shadow. That thing seems to be able to do anything. It’s like having a hidden henchman.

Complement to the Hero: The only reason Facilier even knows Tiana exists is because her buddy Ray steals the voodoo charm. Tiana stays true to her moral path — she values the rewards earned from hard work over getting everything she wants with a magic wand. (Or something about getting what she wants instead of having what she needs). Before that, I’m not even sure he knows she’s a human in frog form. I guess this does prove to Facilier that his “get it easy” ways are wrong.

On the other hand, there’s something to be said that their motivations are reflective. But he may be a better counterpart to Mama Odie.

Fatal Flaw: Facilier doesn’t understand the difference between getting what you want, but having what you need. That’s the lesson Tiana learns. In the end, he gets what he wants but loses what he had.

Method of Defeat/Death: Facilier tempts Tiana with a vision of her restaurant. In exchange, she gives up the charm so he can sack Naveen. To this end, he conjures a vision of her father to show how hard he worked and never got what he wanted. Ironically, it has the opposite effect. But just when you think she’s going to destroy the charm, Facilier’s shadow saves it. Tiana turns back into a frog.

But she uses her sticky tongue to yank the charm out and break it. Then his friends on the other side call in their debt. With flashy colors and that awesome “Are you reeaaad-y” riff. I particularly like how they grab his shadow — the same shadow that’s been his ace-in-the-hole — and drag him into the gravestone portal.