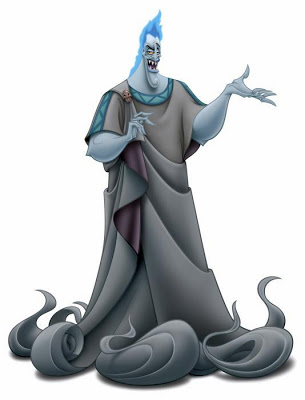 Hercules is about becoming a hero. So in order to become a good hero, you must have a good villain. Is Hades one? Yes, I think so. He’s witty, prone to temper loss, full of strengths both internal and external. His look compliments the art, which throws back to classic Disney cartoons like Toot, Whistle, Plunk, Boom And it’s a good example of using a voice actor to make the character shine, like Robin Williams as the Genie.

I seem to remember this story going differently in God of War… oh, well.

Motivation: Hades’s motivations are rooted in jealousy. All the other gods are partying on Mount Olympus while he’s stuck maintaining the Underworld. Needless to say, it’s not very lively down there. Tangent to that, his goal is to take over Zeus’s job and rule. Honestly, it strikes me as somewhat derivative of “The Lion King” — a new son is born which prompts the sibling for a takeover plan.

Character Strengths: It’s common knowledge now that James Woods based Hades off a fast-talking car salesman. Not what one would expect from a god. But think about the strengths of salesmen. Their powers of communication are explicitly designed to win friends and influence people, all in a matter of seconds. There are countless books and seminars dedicated to this craft. Some people see it as evil — manipulating others with false promises, cheap talk, and hidden truths. But if you’re a villain, that’s exactly your camp. If Hades ever decides to get out of the villain business, he has a promising career as a CEO or a lawyer.

Evilness: Being in the land of the dead tends to affect your sense of morality and ethics. Godhood simply compounds that. He abuses his minions (although they seem to be made out of play-doh), and strikes bargains with others (very Mephistopheles) that they have no way of fulfilling. Case in point — Megora. More than any monster or beast, she is his ace in the hole, and the thread he uses to string her along is the Faustian bargain in her backstory.

Tools: Centaurs, gorgons, rock titans, ice titans, cyclopi, mortal-making juice, shape-shifting demons, and fire hair. He sends super giants made of elements to fight his divine-powered enemies and wins. However despite being a God, there’s nothing much Hades can do to directly attack Herc. He focuses too much on finding a physical weakness, when he should have been concocting a scheme.

Complement to the Hero: If Hercules is about what it means to become a true hero, then Hades has to be a true villain. Hercules undergoes intense training to become a hero, so he can join his father as a God, so he can belong. He’s naive, innocent and believes heroism is simply about doing good deeds and beating up bad guys. Along with heroism comes fame, and that’s where Hades nails him. Hades’s experience and observation let him know not only that all heroes have a weakness, but what Herc’s is. Very Green Goblin of him.

Fatal Flaw: Hades loses points because the root of his downfall doesn’t reflect in his motivations or character strengths. He makes his bargain with Herc to give up his strength, but fails to seal his end of the deal. Herc uses Hades’s penchant for contracts to let him dive into the well of souls to fetch her, which ultimately leads Herc to finding his godhood. I’m not sure if that’s an overconfidence issue, or Hades simply can’t pass up a good sale.

Method of Defeat/Death: Herc throws the titans into space, messing up Hades plans. However, this doesn’t mean he’s down and out, as he still has the damsel in distress. Herc agrees to stay in the Underworld unless he can get Meg from the river Styx, which does nothing for your skin complexion. This selfless act reinstates Hercules’s uber-powers. And as a final note, he punches Hades into the river, where the souls cling to him and drag him down. Not an auspicious ending, especially since this in no way stops Hades from returning, but appropriate to the villain’s oeuvre.