I got no damn idea who the villain is supposed to be in this movie. Maybe that’s part of the problem. The film feels like a cartoon for the Disney Afternoon, not a full feature picture. There’s long periods of nothing but surfing, characters that don’t have an impact on the plot, and convenient coincidences. Which is a shame, because there are some nice moments, like when Lilo throws her doll on the ground, but then runs back and hugs it. Or when Stitch speaks for the first time.

Lilo & Stitch seems to be the start of a trend of Disney movies without a clear antagonist, to be followed by “Brother Bear” and “Chicken Little”. No Maleficents or Ursulas here folks, just good, clean family values. But with a little observation and deduction, we can figure out a villain.

First, who is the protagonist? We got two: Lilo and Stitch. What do they want? Lilo wants to be accepted, and so does Stitch, once he learns he has no purpose. The theme is belonging, and that’s illustrated by the person who’s preventing them from getting what they want: Agent Cobra Bubbles.

Now you might argue that it’s Captain Gantu, since he’s the guy they fight at the end, but he doesn’t play any active role as an obstacle. He’s more like a reason for an action-climax. Bubbles plays the bigger role throughout the story, even though he face heel turns at the end (bizarrely, I might add), he’s the movie’s primary villain. 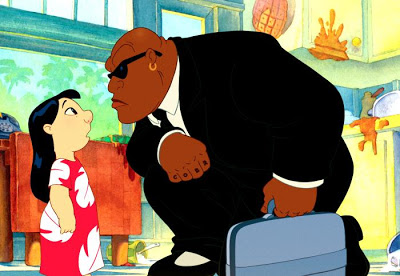 Motivation: Mr. Bubbles is just doing his job. He’s a social worker — he wants to make sure that kids are getting the care and nurturing they need. Lilo appears to be psychotic, and her sister can’t hold down a job. Mr. Bubbles’s heart is in the right place — he has no sense of greed, revenge, or agenda. Why he’s in this job is anybody’s guess. Former CIA? Huge muscly black man living in Hawaii? His name is Cobra Bubbles? There’s so much about him that doesn’t fit. Characterization is played for laughs that fall flat.

Character Strengths: He’s the guy you call when “things go wrong”. He seems to have a knack for being in the right place at the right time — always catching Nani at her worst. And he just happens to be on the exact spot on Earth’s 5.1×108 km surface area where aliens happen to land. Right when they need him. Also, he’s got an excellent vocabulary.

Evilness: As I said before, Mr. Bubbles is just doing his job. He’s a social worker. He’s the most buff, scariest social worker that ever lived. He has fists the size of babies. He’s extremely stoic about it, but everything else about him is so comic you can’t take him seriously. And me, personally, I don’t care for that “Party of Five” shit. Although Nani demonstrates that she loves Lilo, she can’t provide a stable household for her. The movie makes it seem like these coincidences happen at the worst possible times for Nani, but they wouldn’t keep happening if she didn’t keep screwing up. I’m on his side. 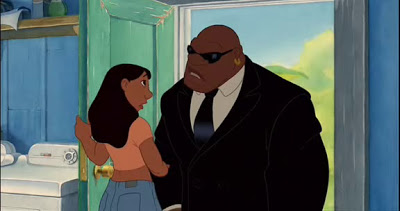 Tools: Err… I’m not sure. In fact, I think he’s pretty ineffective overall–all intimidation and no real power, until the end, when he uses his “influence” to negotiate a truce with the aliens. And I use negotiate in the least sense of the word. It’s Stitch who really convinces the aliens to leave. It sounds like his story could be more interesting, but I think it was already told in “Men in Black”. 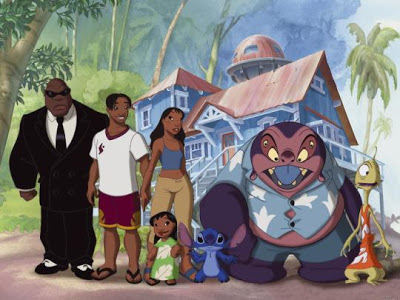 Complement to the Hero: This, strangely enough, is where he gets the highest marks. Lilo is a… weird little girl. She sticks voodoo dolls in a pickle jar and says “my friends must be punished”. She thinks a fish controls the weather. She takes pictures of fat tourists. It’s hard to know whether she’s just being five-year-old weird or she really has a mental disorder. Maybe Bubbles is right to intervene. I don’t know much about Hawaii, but I don’t recall them being pioneers in psychological medical health. 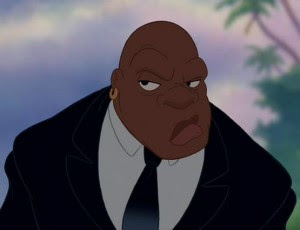 Fatal Flaw: I guess Mr. Bubbles’s soft heart gets the better of him. Despite no apparent change in Nani and Lilo’s behavior, he lets them stay together. But it’s all right because everything works out. Lilo and Nani realize the meaning of family (once they are confronted with loss — one of the most powerful motivators for constant screw-ups). The aliens get to keep galactic order. And Stitch shapes up into a model citizen. 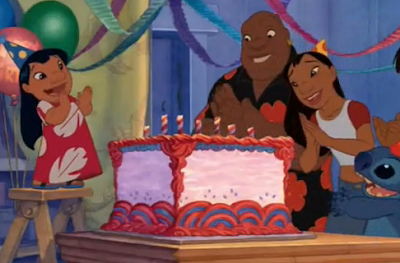 Method of Defeat/Death: Not much to say here. If this was Captain Gantu’s entry, it’d be rife with space action and dramatic dialogue. But Mr. Bubbles simply stands by, drops a few characterization clues, and you really don’t see him again.