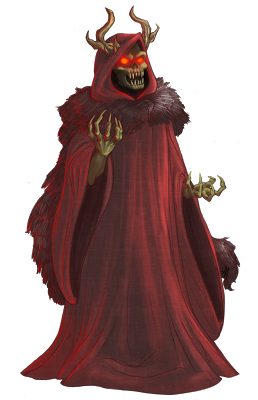 This is one of the first Disney movies I remember seeing a commercial for. I didn’t see the film, obviously. It looked too adult and complex (in 1985, I was four). Also, I had already ruined my movie privileges by running up and down the theater aisles during E.T. (according to my mom).

I’m torn on where to place this one. The Horned King acts much like Sauron (or rips him off). Both are dark entities who are unambiguously evil and may or may not be dead. When it comes to action, they don’t get out much. They even both have the same kind of slaves for their dirty work — gobliny-orcs, dragons, and enchanted humans.

Motivation: The nice thing about dark overlords like this is that their motivation is always clear — getting or keeping some power-giving macguffin. In this case, it’s something called a Black Cauldron, which will allow him to create an unholy army of the undead (cue Bruce Campbell).  That search starts with kidnapping Hen Wen, the psychic pig (yes, I really had to write that).

Power’s always good, but what does he intend to do with it? We know that there’s a war being fought, but it’s offscreen, and we never see a hair of it. Is he going to take over the world? Well, that’s nice, let me know how that turns out. I’m sure it’ll look as great as your castle when you’re through.

Character Strengths: Unlike Sauron, The Horned King can be a classic deadpan snarker. That means there’s something going on behind those red eyes beyond simple power hunger. Unfortunately, we never find out much more than that, as the movie focuses greatly on the band of heroes. I forgive him for that though, because if you can rise to the top and amass an army, there’s obviously a long, unpadded resume in your folder.

Evilness: Being a lich, he’s not exactly in the cavalcade of family-friendly Disney villains, which is a breath of fresh air. I do like this guy’s look. It’s very Tchernobog. Also, the antlers, which you’d think would be lame,  give him a more natural majesty, like a stag. I guess that was a design decision because otherwise, he’d just look like Skeletor.

He gloats, he taunts, kidnaps a princess, chokes out the minions who fail him. But is this any better than a video game villain? He’s successful in some endeavours, like obtaining the pig and obtaining the cauldron. But is that because of his own ability, or Taran’s inability?

Tools: Where there’s a whip, there’s a way.  Horny’s best asset is the drones at his disposal, mostly consisting of goblin fodder (and points for Creeper, the weird little gremlin). But he also has some gwythaints (dragons) and human soldiers.

However, where’s his personal powers? Where’s his magic? His fighting skill? How did he get to the top in the first place? What does he do?

Complement to the Hero: Pretty classic Joseph Campbell “Hero’s Journey” stuff here. Big bad king versus little peasant boy with big dreams and a few friends. The Horned King actually gets some shots in, coming face-to-face with the boy well before the climax.

Taran’s basically incompetent and boyish, and ultimately fails in his task. In fact, the only reason he wins is because he was sorta kind to a monkey-creature with suicidal tendencies (who sounds and acts EXACTLY like Gollum). It’s too bad when you have to subtract points from this category not because of the villain, but because the hero is a moron.

Fatal Flaw: I’m sure it comes as no surprise that this movie is heavily Don Bluth-isized. It was his last movie before leaving Disney, and you can tell by the signature animation, dark and edgy color scheme, the tons and tons of mist, and loose plots.

You know how the cauldron gets destroyed?  The Horned King conveniently leaves to watch his newly-created army march out of the castle. This leaves the cauldron, the 100% key to all his power that he always wanted, alone with the heroes. Even James Bond’s villains weren’t that stupid. At least Sauron had an excuse that he was an eyeball at the time.

Method of Defeat/Death: After NotGollum jumps into the cauldron, it reverses the polarity strong enough to make Donatello proud. All the skeletons fall and get sucked into the new Dyson cauldron. The king, on his way back, half-heartedly tries to push Taran in, but he cannot escape the awesome sucking power. The cauldron rips away his sorta-flesh and there’s a big explosion.

And since he’s a load-bearing king, the castle collapses. Bluth really pulled out the stops for this one.