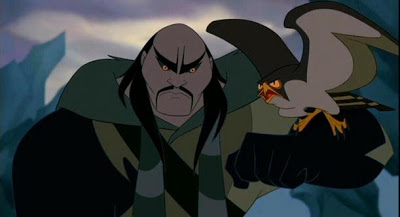 Shan Yu’s a pretty bad guy. Looking at the overall picture of Disney villains, I’d say he comes out in the top 25 percentile. He has a good look, good evilness, but thin ties to the characters.

Motivation: Shan Yu is a conqueror, which was the style at the time. And I suppose it presents its own motivation. No one really questions why Hannibal or Alexander the Great or Julius Caesar did what they did. It was an empire thing. So even though Shan Yu is presented without much characterization here, I’m willing to give it a pass. Waging war and annexing land was just what you did back then. He feels like a G.I. Joe action figure.

Character Strengths: Big time man-strength, like breaking down a door or surviving an avalanche. He’s also pretty arrogant, as he takes on an army of Chinese elites with his own army. However, the arrogance is not misplaced, so I put it as a strength here that he’s not an underestimator, a common villain fault.

Evilness: There’s the famous “How many men does it take to deliver a message?” bit. Plus he totally decimates General Li’s army and burns a village to the ground, including an innocent doll. Guy does not let anything stand in his way, and he doesn’t have an ounce of sympathy in his heart. And he’s got those creepy yellow eyes.

Tools: He’s no slouch with a sword, and he’s got pecs that you can set a watch too. His falcon is an effective scout, and he’s got a massive army backing him. By all rights, he should be kicking ass and taking names. And he does, for the majority of the movie. It’s pretty much luck with a little skill that takes him out in the end. But luck + skill is a dangerous combination.

Complement to the Hero: Shan Yu is merciless, heartless, and cares little for anything else in the world, but his battles. He’s like a soldier robot, almost. Although not dependent on them, his army his his big gun. Mulan, meanwhile, is self-reliant. She’s independent and courageous and, at the end, learns how to use her feminine and masculine traits in to achieve her goals. A good complement shares traits between the hero and villain.

Fatal Flaw: The pride that Shan Yu places in his strength turns to arrogance without any setbacks. He puts all his eggs in one basket and takes his entire army to destroy Li Shang’s troops. Normally, this would be a good thing. Too often do bad guys underestimate the plucky young heroes and their heart. However, thanks to Mulan’s quick-thinking, the entire army becomes buried in an avalanche, essentially wiping him out in one blow. This does not lead to his end, but it is the essential key to his defeat.

Method of Defeat/Death: Shan Yu proves he’s not just a general he and his remaining five soldiers sneak into the Imperial City and kidnap the emperor. Unfortunately, those remaining five soldiers must have brain damage, as they fall for the old “Bugs Bunny Dresses Up As A Girl” tactic. This allows Mulan and Shang to retrieve the emperor. Shan Yu, seeing the girl who destroyed his army, starts a rooftop pursuit. Surprisingly, this does not end with the traditional “Disney death” by falling. Instead, he gets taken out with a massive blast of fireworks. As Malone (The Untouchables) says, “That’s the Chinese way!”