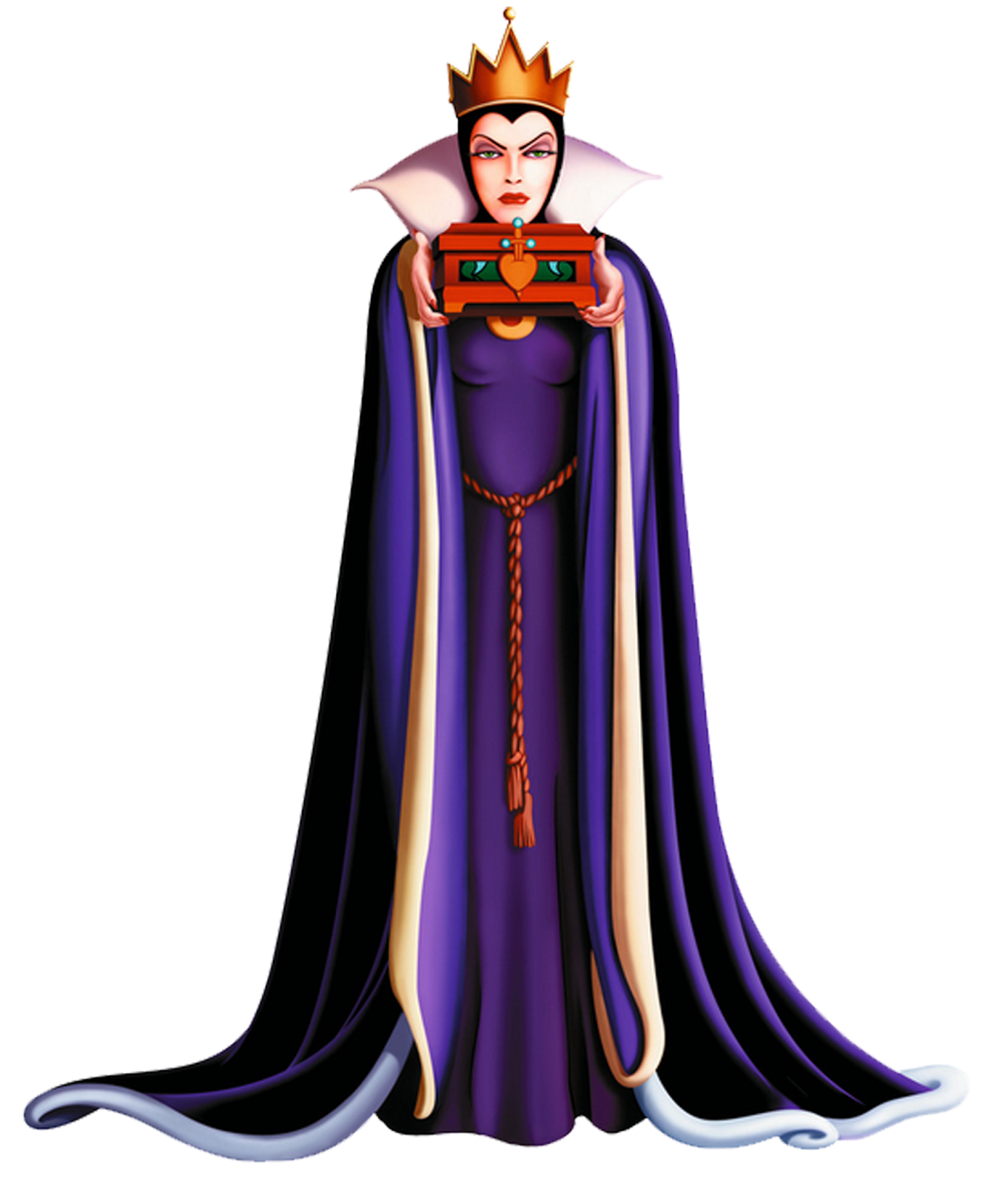 No one gave rip one about Snow White until 2010, when everyone decided they wanted grimdark fairy tale reimaginings. The new movies focused on the Queen (Julia Roberts, Charlize Theron). Probably because she has so much untapped potential. But ultimately, they all failed. Not because she’s perfect to begin with, but there’s not enough there to jump off of. So you end up with a shallow kiddie pool of a character.

Queen Grimhilde (Yes, she has a name. Even I didn’t realize that.) was inspired by the title character of She (to wit, “She Who Must Be Obeyed”) who is a sort of ruler of cannibals and has found the fountain of youth. Or something, I don’t know. I just read the Wikipedia entry.

The likeness is uncanny, but inspiration and two cents will get you a hot cup of jack squat.

Motivation: Madness and jealousy, brought on by her desire to be beautiful and young. Mostly young. I guess this was before they heard of MILFs or Cougar Life.com. She’s kind of like a proto-Mother Gothel.

I’m not sure what she gets from her vanity besides an ego boost. I don’t see any suitors or concubines around her. In fact, I don’t remember anyone else in the castle, except the Huntsman who’s just visiting. I guess she’s just beautiful for herself. Which is a little like being evil for evil’s sake, so minus points here.

Character Strengths: The Queen not only has a kingdom (of indeterminate size — she could be Queen of Nauru for all we know.) but an extensive knowledge of magic — transfiguration, potions. She could be a substitute teacher at Hogwarts. (Cue the Grimhilde/Snape fan fiction). What I wonder about is her judgement. Why did she turn herself into an old hag? She wanted to be so beautiful, I’m surprised she was willing to abandon that for any length of time. In fact, if she could change her appearance, why not appear like Snow White? But I do like that she makes herself ugly and dies as such.

Evilness: She orders a huntsman to take out a fourteen-year-old’s heart. While the idea is plenty evil, that’s mistake number one — never let someone else do your dirty work. How many times have we all been burned by that gem, right evil overlords? . When she finds out the Huntsman renegged, she goes undercover to poison her to death. This is actually a pretty good scene. Use of shadows, scary eyes, frightening transformation, all for the purpose of tricking and killing an innocent woman.

Tools: Well, she has a huntsman at her beck and call. Too bad he wasn’t more loyal (guy can gut a deer like a fish, but can’t look away when shooting an arrow. I bet he was getting big bucks for it too.) Her batcave contains a number of interesting items (mummy dust, black of night, hag’s cackle, scream of fright–same ingredients as in Mountain Dew Pitch Black). The best thing she has is that famous Magic Mirror. Interestingly, she commands it as the “slave in the magic mirror”. I wonder about this guy. Where is he living? He’s a nice guy too, he even tells her where Snow White is and that she got duped.

Complement to the Hero: Yeah, I guess there’s a certain dichotomy here. Snow White is thematic of beauty. The magic mirror knows Snow White is fairer because of what’s in her heart. While we never see the queen do anything bad to her subjects, I think it’s safe to say that she’s not the kindest. My problem is that the filmmakers hammered home the point home too far.

Plus, I’m not sure who’s dumber, the queen’s act or Snow White’s brain. She convinces SW that she can make an apple pie… with just one apple! And she’s not smart enough to realize that something’s up when all the birds start jumping on her. I guess it was the thirties, when you could sell someone a Brooklyn Bridge.

Fatal Flaw: In the first half of the movie, it’s delegating authority. In the second half, she realizes her mistake and it kills her. The birds, who apparently have bigger brains than Snow White, get the dwarfs who chase her down. I guess sometimes, you just can’t win.

Method of Defeat/Death: The dwarfs rush back to the cottage where they chase the old hag up a cliff. (Silly girl, don’t you know better to go down, not up, when you’re being chased.) She comes to a dead end, and tries to pry a boulder loose to Fireball Island them all. When she stops to laugh, Hayes Code lightning hits her and she falls off. Presumably, the boulder crushes her on the way down. This would be tedious, if not for the precognitive vultures who were following this entire time.