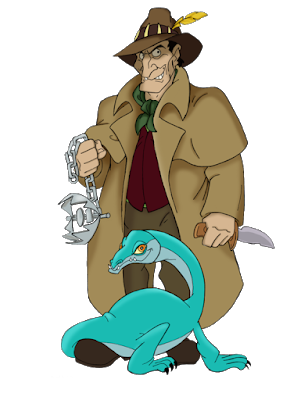 The movie is better than I remembered, but I think it’s more processing than kids can handle. Maybe that’s why it’s Disney’s smallest net gain (although it had a small budget).

It seems like whenever Disney makes the setting part of a character, it fails. Lilo and Stitch did the same thing with Hawaii. It comes off as propaganda. Maybe it’s because the world is smaller and these places aren’t exotic anymore. Maybe because we don’t care about worlds we can visit. We want either worlds we know with fantastic characters (like New York style superheroes) or totally new worlds with ordinary characters (like Lord of the Rings and Guardians of the Galaxy).

Motivation: McLeach joins the over-populated league of villainous hunters.  Fortunately, he’s the last one in my list (unless you count Shere Kahn). But unlike others, he’s a poacher, meaning he captures or kills animals illegally.  What he does with them from there, I don’t know. I assume he sells them to some other party, dead or alive. Hopefully, he doesn’t get taken advantage of because of his 3rd grade education. I expect his plan is early retirement, maybe with the golden eagle – his particular goal for this movie.

Character Strengths: I really don’t know. Same as the other hunters, I suppose. Tracking, knife skills, doesn’t need supervision, loves working with animals. And he can lie pretty effectively. Well, at least enough to fool a nine-year-old.

Evilness: The voice of George C. Scott adds a lot to McLeach’s character. You can tell the guy is having fun.  This and Patton are his finest performances because he makes the part his own.

McLeach follows on the heels of Madame Medusa. Both are in the business of kidnapping small children to do their dirty work. But where it was clever for Medusa to have uncharacteristic sociopathy (greed and child abuse), McLeach is just another in a long line of overly masculine hunters searching for that trophy. Said trophy is probably the last one, so points for that.

Tools: Having a pet Komodo dragon is pretty neat, but you gotta wonder how much he’d get paid for that. Maybe it’s his backup plan. And the way she’s animated makes her look like a snake with legs, not a lizard.  That, and its gremlin-like voice, results in something that crosses the uncanny valley to something creepy, not a comical henchman.

Complement to the Hero: I don’t really get Cody. Is he an orphan? How did he find this golden eagle? What does the eagle get out of it? I get that it’s a lion and the mouse thing, but still, it just invites trouble. And how can he talk to animals? Why does he have the same ability Penny does? Are they long lost cousins? And of course, Cody suffers from whiny kid syndrome — acts like a twelve-year-old, even though he’s nine.

Fatal Flaw: McLeach’s method of defeat does not reflect his personality. It’s all pretty much by accident, so the most you could say is that either A) he needed to pick more capable henchmen or B) needed to take less risks.

Method of Defeat/Death: Cody is suspended in a cage over a river. McLeach is about to shoot the rope in order to drown him, but Joanna accidentally knocks him into Crocodile River. But that doesn’t kill him (too “Temple of Doom” I guess). The crocs swim away after a beating.  Thinking he’s won, he doesn’t see the giant waterfall behind him. Joanna even waves him goodbye. Personally, I think he could have survived it.