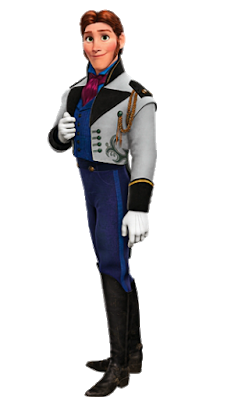 PRINCE HANS OF THE SOUTHERN ISLES

Motivation: Most antagonists are driven by hurt feelings or misunderstandings. Hans is a true sociopath. Yes, Prince Charming is the bad guy. And it’s just what I wanted to see. Hans falls under the sin of avarice — he’s too far down the line of succession to ever inherit his own throne, so he’s looking to marry into one. He even explains this in song (before he takes off his hollow mask of concern). What I’m wondering is — most marriages were arranged (in this time period) for the purposes of gaining land, title, or alliances. Happens all the time in Game of Thrones. Why did he have to lie about it? And was this the only kingdom Hans could find?

Character Strengths: Deception. One hundred percent. Hey, he fooled me. I was busy analyzing the Duke of Weselton when I was in the theater. Hans only reveals his true nature when Anna is teetering between life and death. And Hans nudges the scales towards death (in a totally ineffectual James Bond-villain way, but more on that later). It’s the convincing flaws that pull you over. He’s clumsy. He can fake true love like an actor. Sheep’s clothing in a winter shawl.

What I wonder is, even if he is a psycho, could he be a good king? We never really see a demonstration of his abuse of power (although I’m almost certain that would come later, much like Scar). He demonstrates competent leadership. And although his concern for the people was false, he did provide for them (a blanket on every bed and hot glogg in every cup). But then he’s like The Stepfather – a guy doing good things with bad means.

Evilness: It’s rare a Disney movie provides someone genuinely terrifying, at least for an adult. It’s okay if it goes over the kid’s head. But imagine being a father and this guy comes in wanting to date your daughter. This is a real concern of women with wealth — marrying a man who turns out to be a gold digger. His acts of heroism are only to convince those around him. He saves Elsa from the Duke boys, only to condemn her later when he can look more heroic. He’s playing the long game.

The sad part is how many women/girls remain loyal to him DESPITE all this. There are countless Hans/Elsa fan fiction and fan art. My daughter’s best friend has a Hans doll but no others because she likes him. Fans have started a petition that in the Frozen sequel, Hans should be redeemed. That’s just the power these men have over women. Even when they plainly show their true colors, they’re still loved. Eww.

Tools: Prince Hans has no henchmen. No big guns. No navy backing him. No allies. He works on his own, with only his words and actions to aid him. Personally, I think this makes him scarier. Imagine what he could do with some tangible strength behind him. Unlike a lot of villains, he knows how to pick his targets. I bet he wasn’t even going to say “sandwiches”.

Complement to the Hero: Before his big reveal, he’s just as adorkable as Princess Anna. Even though you know she’s going to learn not to fall in love so quickly, you don’t think Hans is going to a bad guy. He’s like the fiancee in every romantic comedy that the main character breaks up with to be with the other. That’s how all these Disney movies work, right? They’re both young, maybe a little naive, royalty, quick and impulsive. But that’s Hans’s strength. He’s a chameleon. He changes to whatever he needs to be. That’s the mark of a sociopath.

Fatal Flaw: Oh, Hans. Haven’t you learned anything from the mistakes of others? First you reveal your whole plan, then you lock the hero in a room without actually killing them. You just couldn’t resist showing off how smart you are. It’s a common downfall of his kind. It’s how they caught the BTK killer. But no, all you had to do was stay in the room and make sure she froze to death. That’s all you had to do. Would have taken ten minutes.

But to be fair, even I didn’t know about the lock-picking capabilities of snowman noses.

Method of Defeat/Death: The blizzard gets worse after Elsa escapes jail. Hans finds her on the frozen fjord and tells her that Anna died from her Sub-Zero ice blast. Elsa collapses on the ice, and when her back is turned, Hans pulls out his sword (where did that come from?) But Anna’s not quite dead yet. She must choose between saving her own life or saving Elsa’s. She chooses her sister, and as John Woo time starts, Anna steps in front of Hans’s swinging sword. In that instant, she freezes solid. So solid, Hans’s sword shatters and the blast knocks him out. When he regains consciousness, everything’s thawed and both sisters are alive. In a crowning moment of awesome, Anna punches him in the face. A diplomat takes him back to the Southern Isles, where he’ll presumably get the business from his brothers.

Bonus Defeat: In Frozen Fever, Hans is shoveling manure when a giant snowball, created by Elsa sneezing into the royal Birthday Bugle Horn, sails about two hundred miles over the ocean and crashes into him. I believe his bones should be crushed instantly from impact at that velocity but, you know, it’s a cartoon.