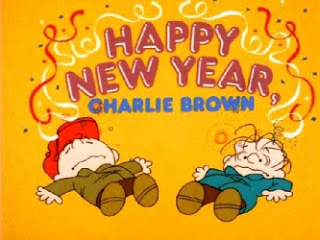 Charlie Brown has been through some shit in his day.  There’s no denying it.  The poor guy’s a loser in every sense of the word, and the worst of it is that his own dog upstages him.  He’s the tragic everyman.  But there’s no episode more tragic that that of “Happy New Year, Charlie Brown.”

“Happy New Year, Charlie Brown” premiered in 1986.  The story was original, although most of the gags came from the strips, like most of the specials.  IMDB users have given it 7.3/10 — one of the moderately successful specials, nowhere near as notorious as “Great Pumpkin” or “A Charlie Brown Christmas”.  This might be because, if you watch it to the end and don’t feel like shit, you don’t have an ounce of humanity in you.

The curtains pull up on a classroom, with Charlie Brown anticipating a homework-free holiday break as the teacher has not assigned any yet.  Until she does…  And it’s no ordinary homework.  The teacher assigns a book report on “War and Peace” by Leo Tolstoy.

I don’t know how old Charlie Brown is, but they don’t even assign that kind of book in college.  It’s a family epic exploring themes of human motivation and the meaning of life.  It’s one thousand one hundred and thirty six pages long (actual quote!) to read in about a week’s worth of Christmas break.  And there are no shortcuts — Charlie Brown tries to find a comic book version, a book on cassette, a film strip.  This isn’t an attempt to cheat, he’s just trying to lighten his load.  There’s no way he should be reading that. 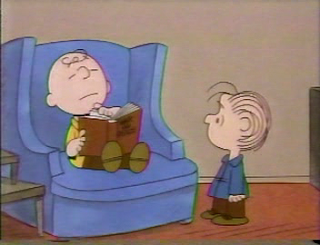 Not to mention that it appears Mr. Brown is the sole recipient of this punishment.  Linus is sitting right behind him, but he never mentions being assigned the book or is seen carrying it.  I don’t know how he avoided this — they’re in the same class.  So apparently this is some kind of Greek underworld punishment exclusively meant for our titular character.  I mean, it’s so heavy he has to carry it with a furniture dolly. 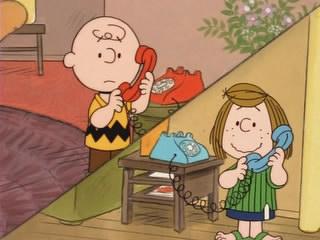 Meanwhile, Peppermint Patty’s having a boy-girl party for New Year’s, and Brown is inspired to ask The Little Red-Haired Girl.  At last!  In this world of bleak skies and drudgerous toil, there is a reason to hope!  But in typical Brownian fashion, he expects something to go wrong.  All he’s got to do is shove a letter in the mail slot and Linus reassures him that his fears are unfounded.

Except when they’re not.  Of course, his prediction comes true.  He gets his hand stuck in the mail slot, and has accidentally opened the door.  So he must call out in both desperation for salvation and invitation, fumbling over his words, stumbling out his message to no one, pleading to the emptiness of despair.  I imagine The Little Red-Haired Girl’s mother or father eventually had to come free him, because C.B. states that she never responded.

Speaking from experience, this is possibly the worst thing to happen to someone like me him.  For a shy, introvert to take the risk of making a forward gesture to the woman who’s become his god, for something to go wrong is devastating.  Coming up with words in this high-stress situation is like pulling turnips from a swamp.  Turnips that you have six seconds to pull or your family is going to starve to death, but the swamp keeps them under with its sticky suction.

When you’re that age, you hope against hope that this is the moment.  You dare to think that there may be something better out there for you.  That there is a portal out of your miserable existence, but you must have the courage to step through.  And then it turns out to be a dive from a cliff, and you’re worse off than before.  If this was real life, Charlie Brown would have killed himself. 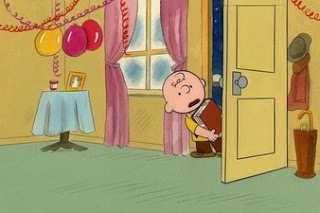 Finally, Patty has her party and Charlie Brown shows up.  Perhaps this is a mistake — he’s still got a lot of work to do — but he’s hoping against hope that despite his flubbed invite, she’ll still show up.  And “War and Peace” is still with him, like Sisyphus’s boulder or the ancient mariner’s albatross.  And keep in mind that when Charlie Brown’s finished reading it, he’s not done.  He still has to analyze it, structure that analysis, and write it up (probably longhand, since this is before home computers were common, and his dad is a barber).  In his dedication, he falls asleep at the party.

AND THEN The Little Red-Haired Girl comes, right around midnight (I know this is a dead horse, but where are their parents?  Do they live in a world like Star Trek’s Miri or a peaceful version of Lord of the Flies?).  And Charlie Brown’s nowhere to be seen.  Because he was trying to fulfill his responsibilities.  So Linus plays the Lancelot and invites her in. 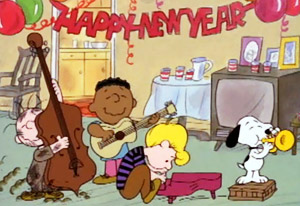 When The Big Brownowski wakes up, groggy and disoriented and holding a book of wordy Russian literature he’s immediately bombarded with 1) the knowledge that he missed midnight 2) Peppermint Patty in his face yelling at him because he didn’t dance with her 3) his sister Sally in his face yelling at him because Linus didn’t dance with her 4) the revelation that this is because Linus was dancing with The Little Red-Haired Girl.

And what’s Charlie Brown’s response?  He doesn’t get mad.  He doesn’t snap and take everyone with him (especially Lucy who always deserves a bullet to the forehead).  He stands in front of the open door and sadly looks out into the night.  It’s as if he can see his happiness drifting out into the eternal blackness.  And I haven’t even mentioned the tragedies of Peppermint Patty and Sally yet — both spurned by their oblivious lovers and left alone and stewing in their ignorant fury.

The next day, after returning to his doldrum life, we learn that although Brown finished his report, he doesn’t remember a thing, and got nothing out of it.  So even despite receiving a D-minus for his concentrated effort and dedication, the whole exercise was pointless.  In spite of every adverse condition, he remained dedicated to his duty, but was ultimately punished for it in every way that mattered.

Of all the specials, none is more tragic than this one.  In the others, there’s at least a little glimmer of optimism.  In “A Charlie Brown Christmas”, the gang unites to show that Christmas isn’t being replaced by commercialism.  In “It’s Your First Kiss, Charlie Brown”, he experiences the titular smooch, although he can’t discern if it happened in his dream or reality.  Even all the movies end on a note of success, however minor.  Not this one.

The ultimate tragedy of Charlie Brown is that he is us.  No matter how much we try, we will ultimately fail.  Every success is built from 99% of losses and failed attempts, if they even get off the ground.  We spend our lives with our parents telling us “you see that guy in the limo?  You can be like that guy.  You can be president.  Just work hard, don’t do drugs, stay in school, be moral, and you’ll make it, kid.” 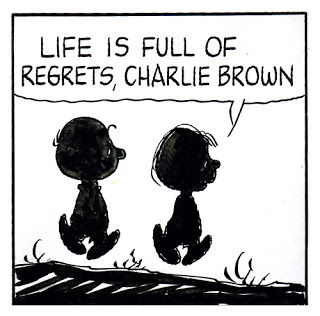