So they finally announced the Final Fantasy VII remake. Year after year, it’s been one of the hands-clasped-in-prayer announcements for E3 as much as the Half-Life 3. And me, being a huge FFVII fan, former writer on the FF Compendium, I asked myself this morning if I’d ever play it. My answer was “Pfft, no.”

Look, man, I love Final Fantasy VII. I LOOOOOVE Final Fantasy VII. I love the characters, I love the story, I love the gameplay. My memories of it are nothing but fond. But the fact is, you can’t go home again. It’s 2015. It’s been more than fifteen years since that magic time. I’m married. I have two daughters. I have a career. I’m not the same man I was when I first played that spiky-haired hero. I’m not as forgiving of things like “This guy are sick” or weird fighting houses with no explanation. The stylistic decisions like popeye arms and fuzzy plot lines can’t be glossed over anymore.

Not to say Final Fantasy hasn’t changed/evolved during the time I have. But that’s a large chunk of the problem. Final Fantasy VII has not died in the time I’ve been alive. There have been related material — Crisis Core, Advent Children, Kingdom Hearts, Dissidia — that are fine avenues and extend the FFVII universe. But they’re not good. Not good at all. It’s not so much a quality drop as a coherence drop. I played Dirge of Cerberus and it was a load of nonsense story and dull gameplay. Style over substance. And that’s been the ongoing modus operandi for Square. As technology improves, Squeenix fills every nook and cranny of every bit, every processor, with graphics and data.

It’s now to the point where you have to invest as much time as reading War & Peace to get a full experience. I don’t want to play a single-player MMORPG. I don’t want to walk down an endless corridor with occasional button mashing when a random monster appears. It’s not even fun anymore, it’s just pressing the same button. Attack, attack, attack. There’s no need for strategy with the smaller monsters. Not when you reach a certain level. 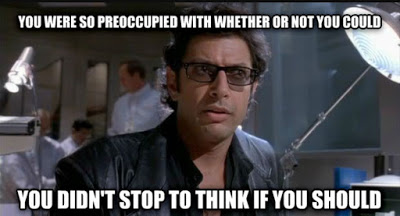 Of course, a remake could change all that. But that is my biggest point. Remember when the Star Wars prequels came out? Everyone was excited not just because of the new stories, but they’d get to see their favorite things without the clunky, boxy robots and rubbery aliens. And then we got a bunch of detailed CG garbage and fifteen minutes of unnecessary pod racing. This is not going to be just a rehash, this is going to be a giant amorphous mass of FFVII gray goo. Remember Cloud as he first was? He helped Yuffie get over her motion sickness, rode a dolphin to the top of a platform, he dressed as a woman in an extended fetch quest. Can you imagine this guy doing that? 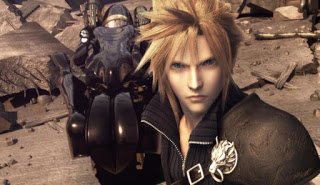 This is the Cloud Squeenix has made now. A taciturn, militant, angsty badass who never sees his friends. He only works in black. And sometimes, very very dark gray. There’s no emotion he can’t push down. Armband representing memory of dead friend? Check. Using sword of other dead friend? Check. Motorcycle? Check. Short, non-committal responses? Check. 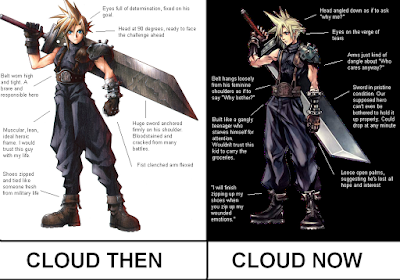 One of the lines from Ernie Cline’s “Fanboys” comes to mind, about a group of geeks questing to get their friend to see Star Wars: Episode 1 before he dies of cancer. He’s the only one that’s seen the cut six months ahead of everyone. “You gotta keep the flaws. Crappy effects, real puppets. That’s what makes it so good.”