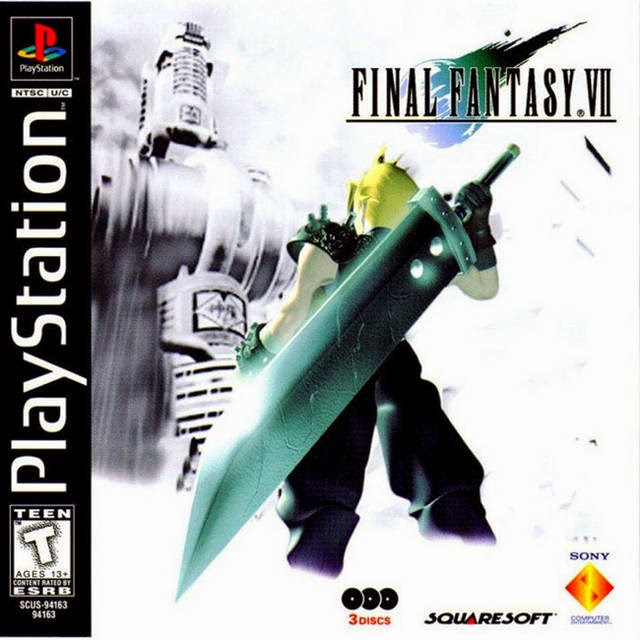 Some of the greatest things in my life came from things I didn’t like at first. Then as time went by I started to appreciate them more and more, like a wine that gets better with age. Except this is a wine that never runs dry. Also, I’m not really a connoisseur – I drink my wine like pop. Anyway, one of those things was Final Fantasy 7. It’s probably a good thing I got into it, or I’d be left out of a hundred inside jokes on the Internet. Plus some great fan art and fan fiction.

But we’re not here to talk about them. We’re here to talk about me. My first memory of Final Fantasy 7 is seeing some friends playing it. A teeny characters was running up and down some roller coaster tracks and then the screen would periodically swish to a battle where the graphics weren’t much better. Weird monsters, little teeny SD characters, and the kiss of death – turn-based gameplay. I thought, huh, this looks like a goofy game.

But my friends couldn’t stop talking about it. They played it periodically when we all got together. I watched the ending before I ever played it. I saw a lot of important parts like Meteor’s coming to Junon and the final battle with Sephiroth + ending, before I played it myself. I didn’t have any idea what was going on, except I knew well in advance that Aeris died. I didn’t quite know who Aeris was though.

But when I played it, and I don’t remember how I got my hands on it or why I was motivated to – maybe everyone was talking about it and I caved, this affected my gameplay. All the time, I’m wondering, when is Aeris going to die? When is Aeris gonna die? I wish I hadn’t known, because it affected my user experience. She was the black sheep of the team because I knew I was going to lose her at some point, and Cloud was supposed to end up with Tifa. So that’s how I played it. When her death came, it was more like, eh, that’s too bad. It wasn’t as devastating as it should have been, and that’s one thing I always regretted.

What I didn’t know was how big an impact that this game would have on the world, or on me. I wasn’t stupid enough to think that the FMVs that composed the commercials were the game itself. In fact, I think FF8 was already well out by the time I played FF7, and FF9 was on the horizon. But FF7 somehow became part of my life, downloading fan art and reading fan fiction. I didn’t even care that most of it was crappy, I wanted to return to these people. I wanted to hear the rest of their stories, or their stories if the timeline had gone in a different direction. FF7 is filled with all the components of drama – heartache, war, alienation, family, life, death. As with most things I get interested in, I started to glom onto any bit of information I could find about FF7 – timelines, characters, plotlines, environmental aspects. An encyclopedia, if you will.

I don’t really have any distinct memories of playing this game, except maybe for taking on the weapons. I did everything in the game that I could, so I would have EXP and then took on the Emerald Weapon and Ruby Weapon. I didn’t think one was harder than the other – they both had different kinds of strategies. Emerald Weapon was more of a regular battle, and my companions – Cloud, Yuffie, and Barret – were chosen based on their limit breaks and physical attacks. I’m quite the brawler. Ruby was more frustrating, because, after several unsuccessful attempts with a Phoenix, I had to base my strategy around one character beating him up, because the other two would inevitably get taken out of the battle. Basically, each character had to be able to stand on their own. This made some very interesting characters that eventually made the final fight with Sephiroth a joke.

Most of my love for FF7 came from the fan fiction I read. It really inspired my love, and led to my eventual decline in interest. Too much Sturgeon’s Law. But it also led to me becoming part of the FFCompendium for a year. I think I’ve already discussed my trials and tribulations here, so I won’t go into that, and believe me, that nutjob didn’t know how good I was, but it was a pleasure to use my knowledge of final fantasy to enhance and deliver information, as well as shoot people down about their ideals and theories (its Aeris if you’re in FF7 land, and Aerith if you’re in Kingdom Hearts land). Now I just shoot people down doing beta-reading for fan fiction. Which is still fun.

The nice thing about being a FF7 fan is that you understand when someone says “kweh?”, or seeing in-jokes in Robot Chicken, or all the hot Aeris-on-Tifa cosplay… oh, I wasn’t supposed to talk about that. I believe we’ll see a FF7 remake in our lifetime, but I’m hoping for one on the PS4, when the technology’s really good. Probably right around the time Duke Nukem Forever is released.