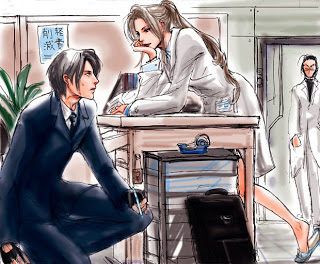 Before Dirge of Cerberus came out, Vincent Valentine was Japan’s representative brooding tragic figure with a mysterious past. Before Edward and Angel made the fangirls swoon, there was one dark-haired, brooding, vaguely urban fantasy hero who let his gun do the talking while tresses of his ebony hair whipped before his mask.

The problem was that Vincent was an optional character. So his additions to the story are minimal to say the least. He doesn’t even get a character-building sidequest like Yuffie, the other new character. His contributions are more to gameplay, as he has a long-range weapon and a decent limit break. His history is only ever hinted at in a few scenes, mostly relating to Hojo (the mad scientist). When you finish the game, Vincent’s story remains ambiguous at best. So you’re left wondering exactly how did this introverted former Turk (a special agent/bodyguard) become a morphing monster?

Fortunately, ambiguity is a friend to fan fiction writers everywhere. Next to the “Aeris or Tifa” plotline, Vincent Valentine is probably the most used fan fiction character for FF7. It should be fairly obvious why, but my point is that lots of writers have tried to fill in Vincent’s back story. But only one has done it well, and that person is Sarah Bua (A.K.A. Sarah the Boring).

It’s really too bad Dirge of Cerberus came out, not just because it was a horrible game more concerned with style over substance and didn’t even deliver close to a coherent narrative. But it also negated a lot of prequel fan fiction, most of which was better written than the game. In Devotion, Vincent has a tangible personality, Hojo is given an air of legitimacy instead of the cackling mad scientist he’s usually portrayed as, and Lucretia/Lucrecia is an actual woman instead of a fawning lab assistant. The story of how they met, fell in love, and were betrayed becomes a story you could see happening in the Final Fantasy 7 universe, and it tugs at your heartstrings, much like Sunshine in Winter

Sarah the Boring hasn’t been active since 2002, but her story lives on.