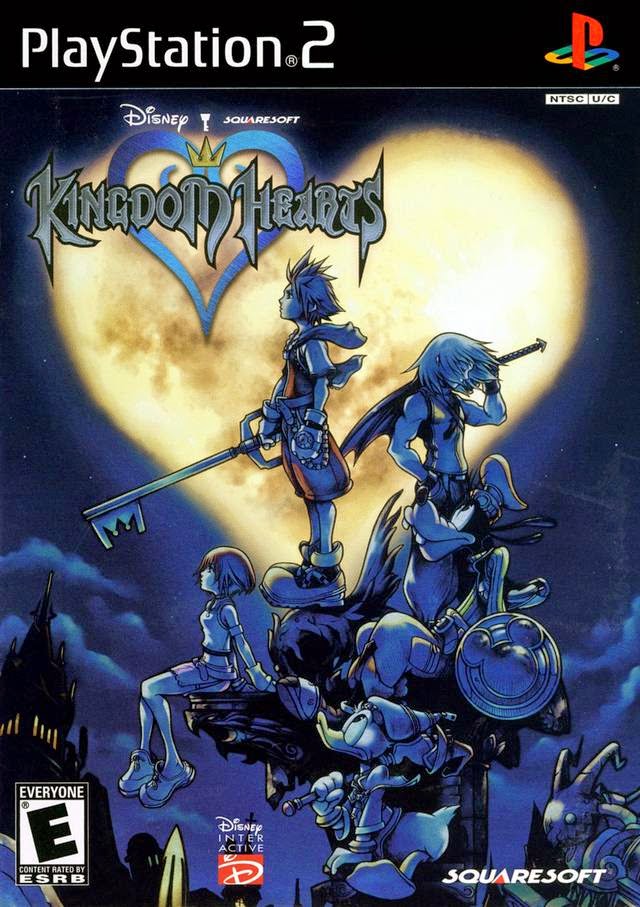 The first thing I noticed, when I saw/heard about Kingdom Hearts, was the return of all my favorite Final Fantasy characters, who had grown to legendary status in my mind by this point. Squall, Cloud, Aeris (I’ll never call her Aerith), Yuffie, Cid, Sephiroth.

The second thing was “They have voices!? Squee!”

Imagine it. After years of reading text, and everyone having the voice in my head, I get to hear what Squall sounds like, see how Cloud uses that big sword, what a real-life casting of Fira looks like. And they didn’t use just run-of-the-mill voice actors, they had celebrities. Squall was David Boreanaz, Aeris was Mandy Moore, Sephiroth was… Lance Bass? Oh, well. Still.

But really, it was the first real glimpse of our favorite characters after the ending of their respective games. Even though it was not a canonical context, it would answer a sliver of that fateful question: “what happened after?” (not that that question is really answered to any satisfying degree, especially when the reunion of Cloud and Aeris is a soundless three-second scene during the credits)

Oh, and of course, this is all integrated with the worlds of Disney. No small feat there – not only do you get to see your favorite FF characters from your middle years, you get to see and interact with your favorite characters from your formative years. You get to go to Alice in Wonderland Land, Peter Pan Land, Tarzan Land, Winnie-the-Pooh Land (wait… what?). It’s what I’ve been talking about throughout all these video game memories – the ability to escape into a different world. Now it’s a world you always saw in a static, never-changing context, a world that you dreamed about in your youth. But the scale and aim of this game exceeded all expectations – it was something you never thought you’d see. It was the must-have game of the year, and I’d be a fool not to get it.

Slight problem: I did not have a PlayStation 2.

But I didn’t let a little thing like that stop me from asking for it at Christmas. I also asked for Final Fantasy X, which had been well out by now, figuring it would be very likely I’d get a PS2 for Xmas, since that would be my “big gift” and they were readily available. But I stipulated that these items should only be bought if I got a PS2.

I should have realized that my family does not read Christmas lists very carefully. They also don’t bother with the whole “checking if someone else bought the same thing”. I got two Final Fantasy X’s and one Kingdom Hearts, and no way to play them. I should have realized this would happen when I got three of the same Ace of Base CD one year. Wait, did I say Ace of Base? I meant Metallica.

Well, that didn’t bother me. I had been on the fence about getting a PS2, mostly due to games like this, and this clinched it. A few days later, I took my Christmas money, exchanged my duplicate FFX, and bought one. ‘Twas a wise investment. I still have that PS2 to this day, and Kingdom Hearts.

Gameplay-wise, KH was the game I always thought should have existed – Final Fantasy in real-time. Well, as close as you were going to get anyway (until FF: Dissidia came out, but by then, Square had become all style and no substance). From sword-slashes to special moves, the battles here are fantastic. The only thing is that the worlds lack the puzzle-depth of Zelda. But the sparkly magic spells, the diverse enemies, and storyline all make up for it.

The most interesting thing I found was how well the base storyline stands on its own. They didn’t need Disney at all. Goofy and Donald sort of stay in the background, and the characters of Riku, and the Heartless compete with Tarzan and Captain Hook for starring roles. It feels like one of those simulation Disney rides that tries to have a story. But it’s a good story, and it especially shines when you get to Hollow Bastion. I mentioned in the Vagrant Story article that I wanted to get a tattoo of the Rood Inverse on my back. After I played this game, I wanted to get a Heartless symbol on my chest.

The only thing I wished this game had was two-player gameplay, optimally co-op. I think it would be pretty easy to integrate – its essentially a beat-em-up. You could do a one-screen, or a split-screen if the player gets too far away, a la “War of the Monsters”.

And the reason I say this is because at the time I got this game, I also got my first girlfriend (who eventually became my wife). She wanted to spend a lot of time with me. I, having been indoctrinated to a life of solitude and geekly loneliness, was not used to the amount of attention a girlfriend needed to receive. It was like having a beeping Tamagotchi. Whatcha doing? Wanna hang out? Can I come over? She was in love with the idea of fighting with Goofy, her favorite character. (Actually, she wanted to play AS Goofy, and continually said so, even when I reassured her that she could not) I soon found out I could not play Kingdom Hearts around her because she was always begging to play. I’d say, “It’s a one-player game.” “Well, I’ll just play for a little while.” “You need your own profile, this is my character.” “I want to play.” Eventually, I’d give in, and she’d immediately fall off of something and die.

Also, she wanted to do the Shadow Heartless’s hair.

Yes, I still married her.

Unfortunately, I had picked a girlfriend who was not especially video-game savvy. She never got farther in video game evolution than Super Mario Bros. So now welcome to the PS2 where EVERY BUTTON DOES SOMETHING and YOU NEED TO KNOW ALL OF THEM TO SURVIVE! This is not Super Mario Bros. This is a Square game. Square has no mercy if you die, that’s why you level up. If you die, you’ve got to start all over. Oh, no, go ahead and plunge into the treetop abyss. Yes, I love to see you start over and over and over. I had to lie to her that I was doing homework just so I could get some uninterrupted play time without her bugging me to hand over the controller. This is my game. This is my world. My territory. She doesn’t know who Squall and Cloud are. She doesn’t know a Blizzaga’s more powerful than Blizzara. She doesn’t even know where those names even came from – that it was just Fire, Fire2, Fire3 until 1999! She doesn’t appreciate the difference in keyblades, that it’s not the blade that changes, its the key chain that changes its properties, and how important it is when you get a new one. No, sure, I’ll just hand over the controller so you can get your ass handed to you by some stupid enemy because it takes too many fingers to use a potion.

So, yes, I love this game. Kingdom Hearts II… not so much. At this point, Square became a money-printing machine, and while the game added a great deal, it lowered the challenge, upped the complexity of the plot, and substituted substance for style. Seriously, you spend the first 10% watching cutscenes and putting up posters as someone you’re not even going to be. Who thought that was a good idea? But I’ll be playing this game again… eventually… some time… maybe.