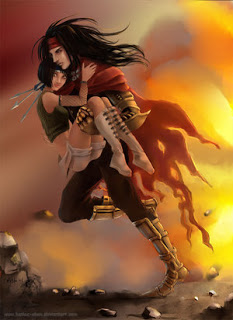 Sunshine in Winter, written by Guardian1, is nice because it’s short (40,000 words) , but it’s packed to the brim with humor, pathos, passion, and drama.

The story is about Yuffie, an extra, but beloved, character from Final Fantasy VII, who fills in the requisite “spunky tomboy” role in all JRPGs and most animes. Her romantic pairing is Vincent Valentine, the “dark, brooding lone wolf” character. Through a silly accident, Selphie’s leg becomes poisoned. Rather than amputate, since she’s a ninja, and leglessness doesn’t contribute to her line of work (there’s no workman’s comp for ninjutsu), she maintains an obstinant attitude that she can be cured. Vincent wordlessly takes care of her as she resists impending death.

The best thing about this story is the humor, thanks to the informal style. Guardian1 captures Yuffie’s voice perfectly and Vincent’s characteristics are plausible within the context of the story. I say the context because there is some interesting characterization here. It goes deeper than the game does, as you’d expect to with extra characters. It’s as if she’s painted the world with bright crayons and watercolors, far brighter than the original material, which is fine. I think this was the author’s intention, and she does it well.

Guardian1 hasn’t made any updates to her FanFiction.net profile since 2008. Her homepage link is defunct. So I don’t know what she’s doing now. She’s got 40 stories up so you’re bound to find something you like. All of her stuff is good. I just wish I knew what she was doing now.