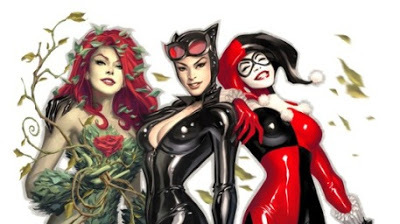 I love Batman’s villains because they all represent fractured psyches of the hero. Unlike just about any other comic book villain who are just about power, revenge, or greed. Enemies like the Joker represent chaos opposed to Batman’s order. Bane is what happens when you have too much power. Two-Face is the double identity getting away from you. Scarecrow is fear (which Batman uses for good, but it’s a double-edged sword). Riddler represents obsession. The Penguin represents… uh, deformity? Indulgence? Umbrellas? I’ll get back to you on that one. Anyway, my point is the men are pretty diverse, all shapes and sizes.

The girls all represent some fractured psyche as well. Poison Ivy is the repressed schoolgirl becoming liberated. Catwoman is Batman’s intellectual equal in the criminal world (bat rhymes with cat, you know). Harley Quinn is the female side of Joker’s dementia, forever victim to his whims. Problem is, they’re also all sex objects.

They didn’t start that way, but they’ve gotten way worse, and I don’t like it. I can’t find one picture Poison Ivy without her titties bouncing out as big as pumpkins. I don’t know, maybe it’s part of her character, something about flowers and vaginas. But all the others are the same way too. Harley Quinn is a Lolita — pigtails and a gymnast’s body with a skin-tight suit. Plus it’s implied that she has a sexual relationship with Joker. Catwoman is the Lois Lane — regular-sized, regular hair, regular boobs. The problem is she always wears skin-tight leather, carries a whip, and is constantly making innuendos.

The sad part (not the saddest part, I’ll get to that) is that they didn’t always used to be that way. Poison Ivy used to be just a seductress. Then she became an eco-terrorist, then a mad scientist. Then her storyline changed to her having the ability to create and resist poisons, then she could control plants a la Swamp Thing. The only thing she wears is a few conveniently placed leaves. Harley Quinn started on a children’s cartoon show. And Catwoman didn’t even wear a costume.

Make no mistake. Batman is a male power fantasy so this is not unexpected. Ridiculous, but not unexpected. You don’t need to make women into strippers to retain interest. In fact, it becomes implausible to have a cat burglar with her jacket halfway unzipped, or someone whose breasts are too big for her prison shirt to be closed.

In fact, I think of all the superheroes, he might be the most “Republican-like”. And I don’t enjoy saying that. But he’s a multi-billionaire philanthropist who inherited his money. For all intents and purposes, there’s no way he could maintain his lifestyle and business and should have had his identity uncovered a long time ago (but again, fantasy). He has power and women, but a chip on his shoulder from mom and dad, and he’s always trying to redeem himself for them.

Most of his adventures don’t focus so much on saving the victim as catching the criminal. His enemies are extremist in character and represent chaos, power, and liberation. Not often greed or revenge. Batman is always trying to put things back the way they were. Victims tend to be faceless (and there’s a few storylines where this is one of the messages) and the criminal is never ambiguous. It’s always quite clear that they’re doing bad.

Personally, I’d want to see a superhero who deals with those less ambiguous guys (people who interfere with legal abortion clinics, people on Ashley-Madison, obviously corrupt politicians who game the system, sexual predators who slip through the cracks). That’s what I wanted the Supergirl movie to have. That’s what superheroes are meant for — saving people when the system fails.

Now if you’ll excuse me, my torrent is done.