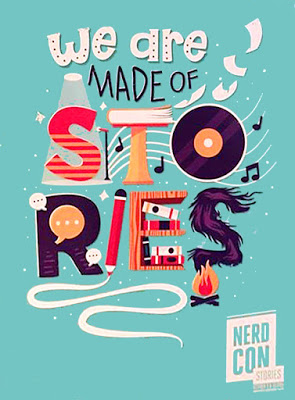 So here’s my write-up on attending NerdCon: Stories.

To summarize, I’m not sure how much I learned, but I was definitely entertained. There wasn’t anything about the publishing industry or how to get an agent, but that was all right. That wasn’t what I was expecting. This con was focused on the fundamentals behind the story: why they matter, what effect they can have. The medium didn’t matter. Novel, movie, or song. Horror, erotica, or adventure. Stories are what makes us human.

Let’s go to the rundown. Unlike Convergence, there was a lot more “everybody goes to this” events scheduled. The only thing scheduled in the morning was mainstage entertainment. Then it broke out into three hour-long panels, with half hour breaks in-between (and even that was too short to get in a meal). The reason I say I didn’t feel educated was because the people on the panels didn’t seem to have any answers. How do you make your money? (You don’t. You do it for the love.) How do you hone your craft? What is your process? (I don’t have one. Just get words on the page.) And the “Activism and Narrative” panel wasn’t even the one I wanted. I wanted the one about conveying truths in narrative, but that one got full before I could get in. Shouldn’t have gone down for that coffee.

The mainstages were most definitely the highlights. There were no bad seats and all the best entertainment was there. Some of the things were unusual — playing “who said the quote? Kanye West or Donald Trump?” and Starship: Artemis with Patrick Rothfuss and John Scalzi. Not sure what these had to do with the theme, but they were sure funny. Maybe it was just an unique way to introduce the guests.

The afternoon mainstage wasn’t very good. They played “what’s in my mouth” (guess what object is in the mouth, like a plastic spider covered in spinach puree), a brief conversation about science with Hank Green and Ben Lillie, and a subpar musical performance by Harry & the Potters — a “wizard rock” band that was neither wizard nor rock. Then there was an hour break for dinner. I thought about going out — I was in beautiful downtown Minneapolis just a block from Nicollet Mall, but given how time seems to dilate in this convention, I had to eat and run*.

*I ate very badly at the convention because I was hungover — a Dunn Brothers tuna sandwich at 10:00 AM, a gyro, and Chipotle + cafeteria pizza for dinner. The next day I had four slices of leftover Domino’s and went to a Chinese food bar & grill for dinner.

The evening ended with another mainstage with “Superfight”, a “Cards Against Humanity”-like game where you draw characters, powers, and altering situations and decide who would win in a fight. (For example, Katniss in a blimp holding a baby vs. the bottom legs of Iron Man + the top half of the Mario Brothers made of kittens.) followed by Patrick Rothfuss leading a story-telling game in the style of telling tall tales at a pub. That was pretty good — it reminded me of the Mad Scientist tournament in Convergence where, if you got good personalities, the entertainment writes itself.

After that was an Open Mic, but I just wasn’t feeling it. It was Friday, it was a quarter after eight, so I went home.

The next day was better, but there seemed to be a lot more attendees. I finally got to see John Green and Rainbow Rowell (who is as adorable live as I imagined and more). They talked about how dealing with success, which is a privileged problem (they admitted that) and not one that I have. But I wasn’t gung-ho about any of the panels at this time (the others were putting yourself online and the art of performing) but this was the only chance I’d have to see John Green and Rainbow Rowell talk about things.

The most disappointing part of the day was not getting into the Writing Sex panel. I’ve thought about expanding into erotica (as Milk & Honey and The Upgrades demonstrate), but as soon as I left the previous panel, the line for Writing Sex already stretched across the width of the convention center. When you don’t even have a chance of getting into a panel after the previous one ended, there’s something wrong. Hopefully someone taped it — it would have been the most useful panel for me at the whole convention.

The other two panels were a “Welcome to Night Vale” Q & A, which I had no interest in, and Storytelling Through Song. Also no interest — not a musical guy. I thought about just tooling around, getting some food, for the hour. But I didn’t want to overeat, I’d already been eating crap, and thought it might be a waste of money. So I went to the song one because it was in the auditorium I thought I needed to be in for the last panel. And as NerdCon had demonstrated to me, you better get there before time allows or don’t count on a seat. I didn’t pay attention and just read on my phone in the back.

Now the last panel was “The Moral Responsibility of the Storyteller”. I’ll talk more about this later — it gave me a lot of food for thought. The funny thing was, this was not actually the panel I wanted to attend — I thought I was going to “Tropes, Misinformation, and Stereotypes”, but I got my auditoriums mixed up. But by the time the moderator I didn’t expect walked in, I had been there long enough and was trapped in the middle that I thought, “eh, I’ll stay.” And I’m glad I did. 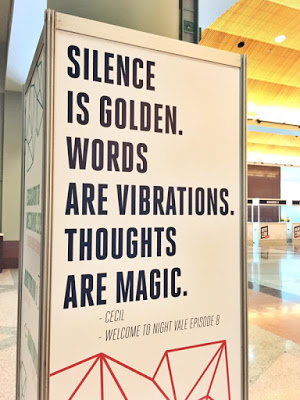 Then finally was the last two mainstage panels. The afternoon one was pretty much the official goodbye to NerdCon. The mock debate was funny, but seemed more for an improv class. But when you got professional hams like John Scalzi and Mara Wilson and Storm (of Paul and Storm) against NY theater troupers and beat poets, it’s not to laugh.

Mary Robinette Kowal (who I despise because she’s one of those people who just decides to do stuff and succeeds wildly at it (just kidding, she’s awesome)) and her troupe put on an amazing, unbelievable puppet show. Scalzi narrated/”barded” while the puppeteers did one of those black-clad puppeteers against a black background things. But they used the most simple and elegant props, nothing professional. The main girl was one wrist wrapped in a handkerchief and holding a pair of glasses between her fingers, while a second puppeteer operated two American Doll galoshes. The knight was a coffee canister and two tuna cans for feet. The dragon was an umbrella opening and closing, breathing red plastic bag fire. And the cyclops was just a white balloon with a dot. It made me sorry for making fun of my sister’s puppet class in college.

And for some reason the thing that sticks with me most is the last event — something called “Too Much Light Makes the Baby Go Blind”. Okay, do you know that Saturday Night Live sketch where the theater students are doing this artsy avant-garde production with that’s equal parts cynical and pretentous. It was like that, but way way better. It’s hard to explain. Like zen stories, but with life experience. Comedy and satire and life lessons in bite-size form. It was so unique and live and different that I’m still replaying moments days later. Like when you hear/see a musical for the first time and can’t get the songs out of your head? 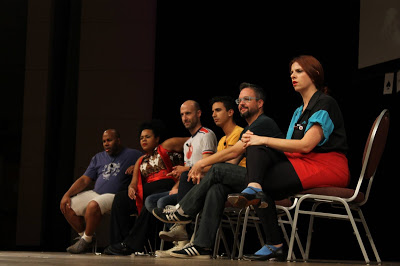 So I loved it, the whole experience. But that doesn’t mean there isn’t plenty of room for improvement. First off, of course, making room. Everybody should be able to see the panel they want given reasonable time to get there. I think the combo of it being about sex (sex sells!) and the two other panels being niche contributed to the over-crowding. But it’s a problem I expect out of a first-year con.

The other thing was that all the events were pretty much “read-only”. They were either lectures or panels or conversations. Basically, you’re watching people. This meant not so much engagement of the audience. I would have loved more ways to interact with other people. Like games! There are tons of interactive or collaborative story-telling games — Fiasco, Happy Birthday Robot, many of which have been featured on TableTop.

The best part of the con was this: seeing attendees writing in notebooks or reading on the floor like they DGAF. That’s my kinda people. That’s the home for me.