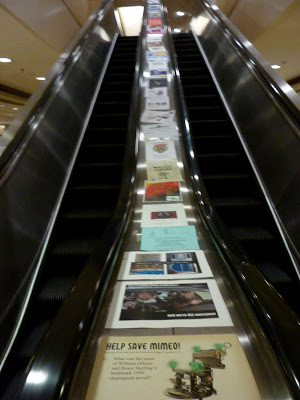 CONvergence is a “spec fic” convention, held in Minnesota in early July. This year, I attended my first.

It’s not the first convention I attended. When I went to school in Eau Claire was the first NoBrandCon, put on by the campus’s Anime Appreciation Society. I was a helper in year two and an attendee in year three. The guys who put it on are great, and I had a great time. If not for NoBrandCon, I would have no idea how conventions work, and probably wouldn’t have gone.

But that’s a small convention in a small college town. CONvergence is one of the most attended in North America. And I knew nothing about it going in. So why go? Because I keep hearing about how writers meet their editors at conventions, or at least make connections. I failed to do that, but I did learn quite a few things that I wouldn’t have learned if I didn’t go. And as I’ve mentioned before, I have trouble with conventions. CONvergence is really the only one I know of.

For some lucky reason, the place where it’s held, the Bloomington Sheraton, is about one block away from my work. So getting there was no problem, and I knew I was headed to the right place when I almost hit Ness. The parking lot was full, so I surmised most people were staying at the hotel. But I had a home and kids to go to at the end of the day (granted, said kids were sleeping, but ah well).

The hardest part of me going to any new place is orienting one self. And every hotel main floor is arranged in bizarre configurations. From my prior experiences, I know that the first thing you do in any convention is get your registration badge. I apparently went through the wrong door, as the first thing I saw was the hotel wing where the viewing rooms were. Nervous, I wandered around the Victorian women and Dr. Horribles, until I encountered a sign that said “Registration in the Garden Court”. Well, that’s great, but where is the Garden Court? And what is a garden court? Is that outside?

But I found it, approached and got a badge that attached to my person precariously. So I tried attaching it in various places throughout the day (the next day, I bought a lanyard and badge protector for $4.00, but had to wait in line a long time as ladies kept trying on sweatshirts).

Now before we begin with the chronological breakdown, let me tell you what I learned for the overall experience. First, I need to bone up on my Doctor Who. That is a prominent bit of geeklore which I am sadly missing out on. Star Trek? Got it. Star Wars? I know that too. Dungeons and Dragons? I know the basics. Lord of the Rings? Love the movies. But Doctor Who, I just haven’t seen.

Second: Steampunk. It was everywhere. I don’t know why, I don’t know where it came from, but probably half of all the content at the convention was steampunk-related. That means the content in the art gallery, artist’s alley, costumes, stuff in the dealer’s room, panels, etc. I’m not exaggerating. Everyone’s always wondering what the next big bandwagon in spec fic is. Before it’s been vampires and dystopias and old superheroes. I’m telling you, steampunk is it.

Now, the week before, I spent time meticulously arranging my schedule using the CONvergence app. I pruned it like a delicate bonsai tree to avoid conflicts and allow time to peruse the Dealer’s Room and other miscellaneous little things. I already knew I’d be missing the costume contest (here, called the masquerade) because of a previous commitment, and I didn’t plan on attending Sunday because A) there weren’t any panels I really wanted to attend and B) I figured I’d be burned out by then. So I needed to max out my Thursday, Friday, and part of Saturday.