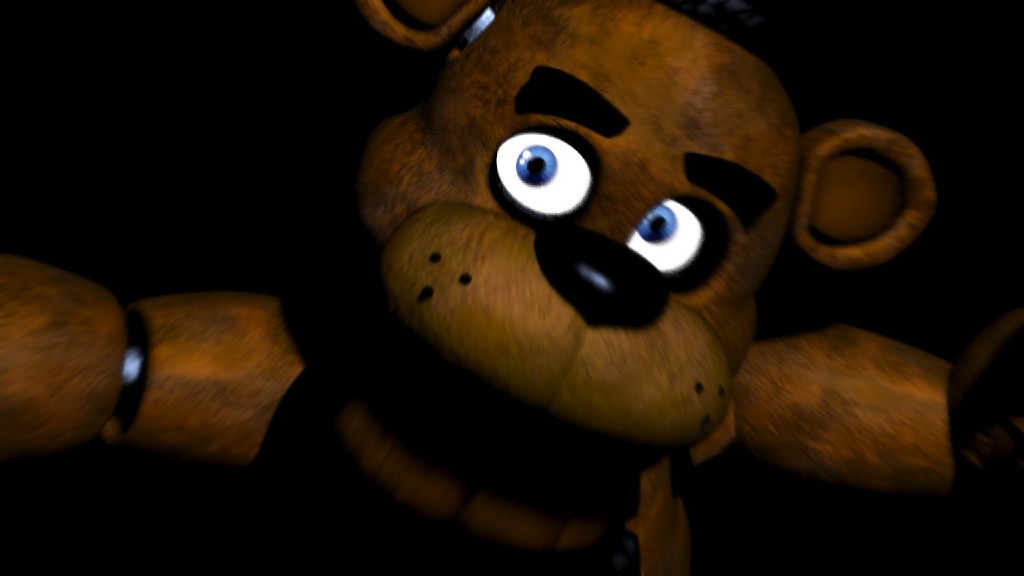 I think it got popular because of the Let’s Plays. It’s always fun to watch people freak out. Bill Cosby said when a person is scared, that’s the only time they’re really being themself. I’ve been watching Let’s Play’s, reading the entire FN@F wiki, playing the memes.

Yet I don’t own the game, and don’t plan to. It’s all jumpscares. I hate jumpscares for two reasons. They’re cheap and meaningless ways to control the audience. And I hate the way jumpscares make me feel, like a weak little kitten, manipulated, afraid of everything. Just like elementary school. Yes, I have a double standard. Deal with it.*

So why am I so damn fascinated with it? Maybe because it’s Halloween. But let’s take a look at why it appeals, at least, to me. 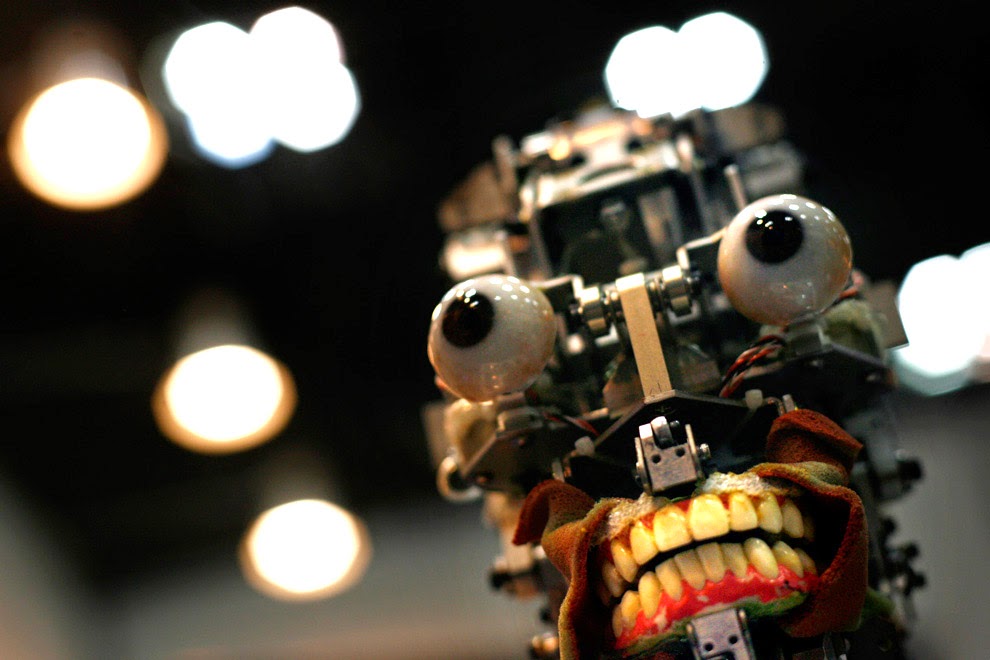 Robots – If you’ve read some of my book reviews, you’ll see that I complain a lot about how the robots act too human. Not here. They are nice and robotty. Full of gears, wires, crossbars. This is great because they are in that space where the uncanny valley peaks its highest and falls to its lowest. In fact, I’ve seen graphs that show “teddy bear” at the top and “zombie” at the valley. 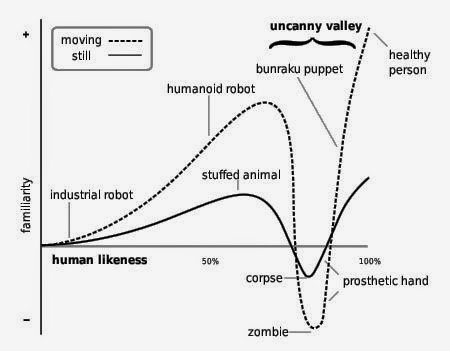 Their faces move separate from their eyes, if they have eyes… or faces. Warped or missing body parts (like Foxy). Limb joints that expose the endoskeleton. They move faster than they should, but you never see them doing so. If you read the story, you see that they refer to Bonnie as a “he”.  These things are just so awfully off you can’t look away. Even their sounds are uncanny — slowed down girl laughing or raptor-like screeching that cuts out. I think Chica scares me the most, because she’s got that second set of teeth in her mouth. 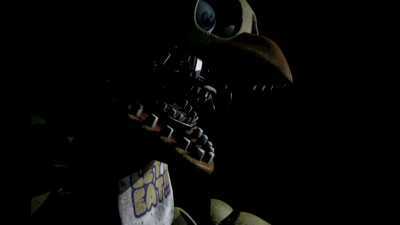 Fear and Dread – FN@F’s encompasses all ways to scare someone — the gross-out, the startle, the sense of dread. You have basically no control, no agency in this game. You’re a helpless babe with no arms or legs. All you can do is watch on cameras and maybe shut the door (a mechanic which comes with cost).

In all horror movies, it’s not the jump scare that gets you, it’s the part before that. The dread that something is going to happen, you don’t know what, but you can’t do a damn thing about it. The same held true for Resident Evil. The scary part is not that you’re in a mansion with zombies. It’s that there are more of them than you have bullets, and you don’t know where you can get more.

Also, claustrophobia. You can’t leave the room. The perspectives you are given are grainy, colorless, and fixed. It’s got key elements that are always winners — the creepy doll, the painting that follows you with its eyes, unbearable silence, fear of mental illness (with the hallucinations), and various kinds of jump scares. 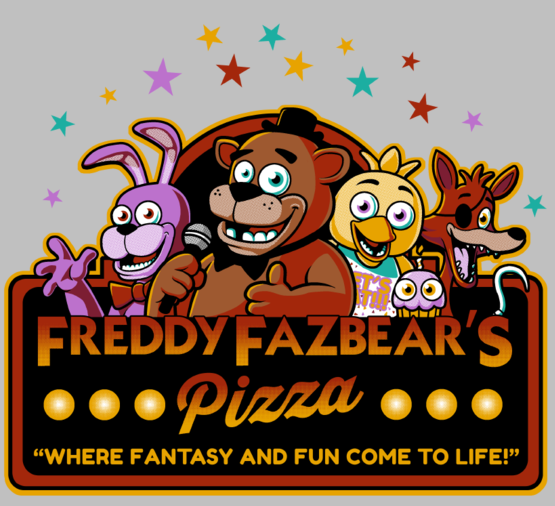 A Unique Setting – As far as I know, there’s never been a horror story set at a Showbiz Pizza. There’ve been similar scenarios, like a circus, a funhouse, that are tangential. It’s the new Friday the 13th. Before we had young innocent summer camp, young innocent babysitting, young innocent slumber parties. Now we’ve got young innocent pizza-oriented family entertainment centers.  But Freddy Fazbear’s Pizza hits on that unique niche of nostalgia that only eighties kids like me can understand and appreciate. Plus it’s pretty universal to all of us who are now thirty-year-old gamers. 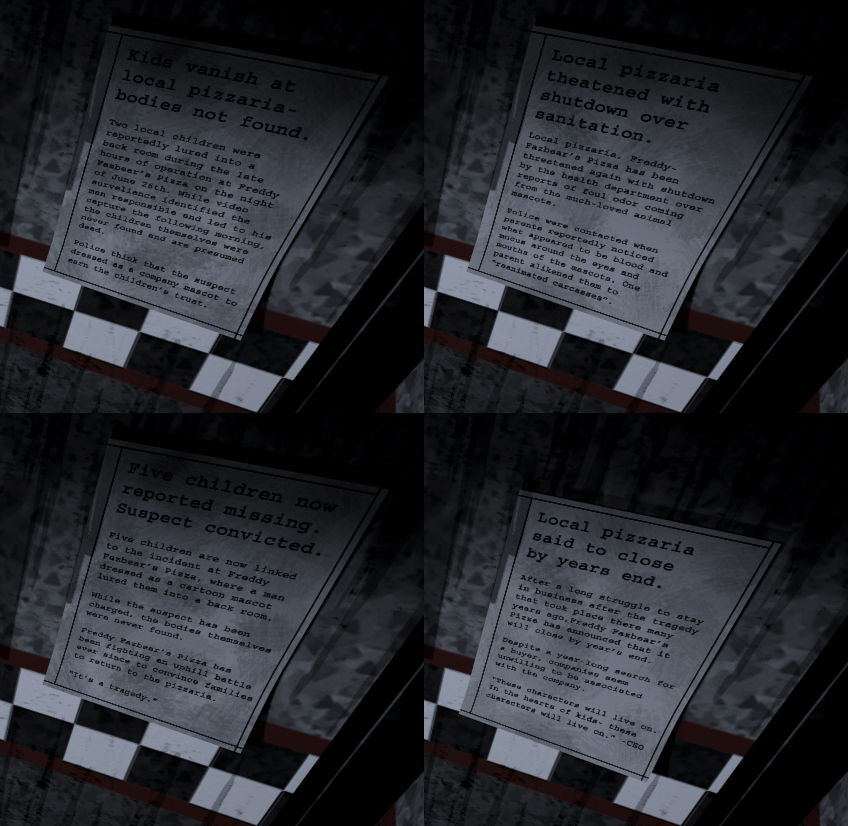 A Thin Backstory – Any narrative is presented though a mysterious “phone guy” to give you your tutorial. I still don’t get how it works — did he pre-record all five in a row? Does he work the 6 – midnight shift right before you enter? If so, don’t you pass each other on the way in? How did the fifth night get recorded? Are these on an answering machine? A voice mail? If so, why does it ring? Is he in a different room? Where is the phone?

Besides all that, there are the purposeful “hints” of something wrong, just enough to give a sense of “offness”. The “Bite of ’87” that phone guy mentions never gets further explanation. There are posted articles about the the animatronics’ smell of decaying flesh and pus, the serial killer who posed as Freddy Fazbear, and the five children who were never found. You are never given any more than suggestions that they exist and may be the cause of this “haunting”.

And here’s Phone Guy to tell you it’s all fine, nothing to worry about, it’s all in your head. Yeah, you might get horribly mangled, but if you play dead, that might stave off the killer robots in this Chuck E. Cheese.

That means it’s great fun to interpret all the missing elements, analyse and add your own story. Trade theories and suggest alternatives. It’s what smart people on the Internet do.  People have gotten so desperate they’re making the cupcake on the desk into a character. 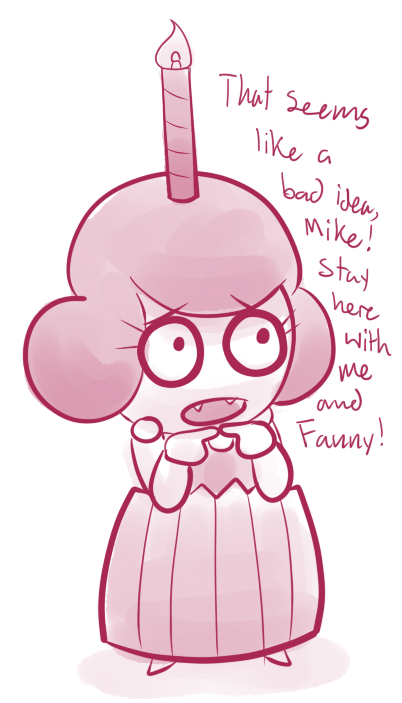 Of course, it’s all tongue-in-cheek. No food establishment could exist with such things and still be in business. No contract that says “we have ninety days until we need to report you missing” could legally exist. There’s no rules sign that says “no pooping on the floor”. These robots have the ability to be “free-roaming” in 198X, but we still don’t have a robot that can climb stairs.

So take that for what it’s worth — the campiness of a eighties horror Blockbuster Rental. It’s become an instant, quick-play classic. Does that mean it’s bright flame that will burn quickly. I’m afraid it might be — there’s not much to the game besides atmosphere and jumpscares. I think more of the innovating setting and aesthetic than the gameplay itself. But time will tell.

*Remember those Flash thingies that masqueraded as images, that you had to find the differences or stare for a while and something would happen, then the Exorcist would pop up and scream? Fucking hated those.