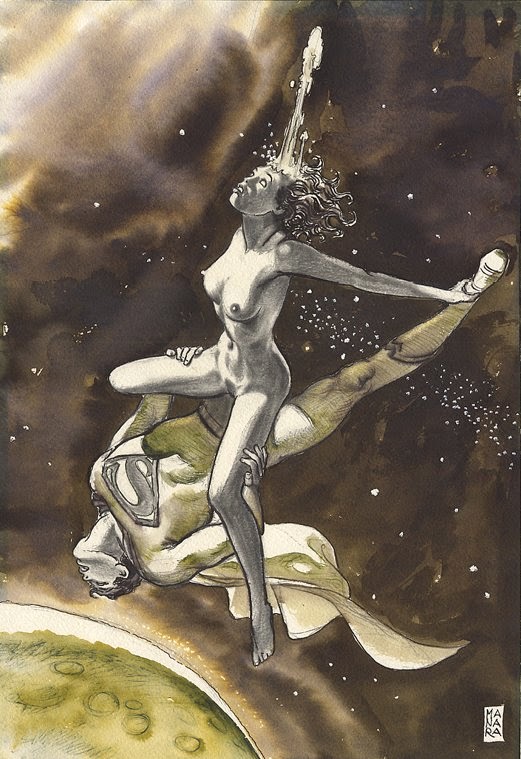 So the other day I was driving home from work and thinking about stuff. For some reason that age old problem came to mind – could Superman have sex?

The going theory is that Superman, on Earth, could only have sex with another Kryptonian. If he had sex with an Earth woman, say Lois Lane, he would ejaculate so hard that it would blow her brains out (see image). This is known as the “man of steel, woman of kleenex” problem. (And this is besides the issue of being pregnant with a super-baby that could kick its way out of your uterus).

Some people think that it’s not an issue, because Superman can control his powers. That’s why he doesn’t crush a doorknob every time he walks through a door. He can stop his heart on command (this was in an early comic book, but it’s still canon). On the other hand, the human body is full of involuntary responses. Especially in the heat of passion, can Superman control it that much? Human men can’t.

That got me thinking about his other involuntary responses, like peeing. Surely Superman doesn’t destroy every toilet he goes in. Otherwise it would be like a high-powered pressure washer. Pooping isn’t really a pressure thing, so I don’t think that would be an issue. But does Superman even need to poop?

He does eat, so it’s got to go somewhere. He can stop his heart, so maybe he can stop his metabolism? Or maybe he has super-metabolism, where he uses all parts of the food. His super-power comes from the yellow sun, so he doesn’t need it to live, I don’t think. I don’t think you can starve Superman to death. (I wonder if Lex Luthor’s tried that yet, instead of stupid green kryptonite plan #4,053).

What if it was, like, super-poop? Does poop retain properties of its digester? Maybe it becomes super-dense dark matter like Nibbler’s poop. So if he dropped a deuce, it could fall through all the floors of the Daily Planet. Could you throw the poop at someone and kill them? If you got near the poop, would you gain super powers? Like Superman gets weaker because of green kryptonite. I’m going to leave it at “being near poop” because I don’t like where this line of questioning is heading.

If it’s like normal poop, could you use it to fertilize your garden and grow super corn (a la Spaced Invaders?) Superman could be wasting a valuable natural resource. Forget saving us from tornadoes and aliens. How about a little contribution to our agricultural output? It works for guano. On the other hand, maybe that’s how Ma and Pa Kent were able to keep their tiny little farm alive. I guess it wasn’t because they had a super-son for child labor to tow the plow.

And if it’s the case for Superman, think about all the other superheroes — the Martian Manhunter’s green poop, Wonder Woman’s god-given poop, Venom’s symbiotic poop, Spider-man’s sticky poop, and the Incredible Hulk’s…

I’ve taken this too far, haven’t I?