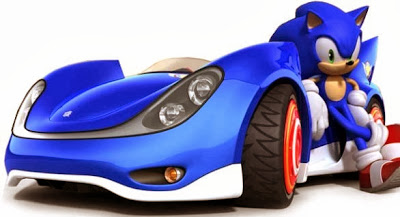 I’m not the first one to say this, and I’ve already branded myself as a Nintendo fanboy, so my words will have little bearing. But for all the Sonic nostalgia love, hasn’t anyone realized the concept behind the Sonic games is completely stupid?

Here’s the thing: what is the principle behind Sonic? Go fast. As fast as possible. What happens when you go as fast as possible? You run into spikes. You fall off a cliff. You smash into an enemy. You drop into a lake. You launch into a wall. 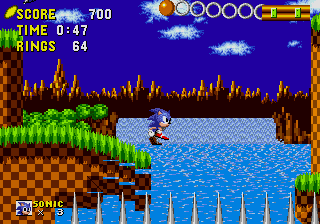 Any bonuses you collect are useless because as soon as you touch something bad, you lose them all. You could collect three hundred rings. Touch something, they’re all gone. Not a great cost-benefit analysis to speed.

I think all the love for Sonic is simply based on nostalgia for the Sega Genesis/Super Nintendo days. Remember how great those commercials were? Nintendo had the track record, but Sega had “blast processing” and a much better ad campaign, aimed at the heart of YA boys. He was a popular, appealing mascot. He was designed with ad campaigns in mind. Personally, I think he represented what the nineties were all about. Or what we wanted them to be about. Quickness, heroism, and attitude.

But back to the video games. Sonic was at his best on the Genesis, but never succeeded in truly breaking through the next gen walls. How can I tell? Because now he’s playing ice hockey with Mario. Once bitter rivals, now he’s on the competitor’s platform. His games are so bad he has to crib onto other, better mascots. Sonic works as an icon, he doesn’t work as a video game. 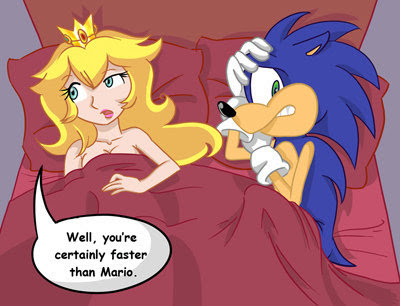 UPDATE: These guys put it better than I ever could.