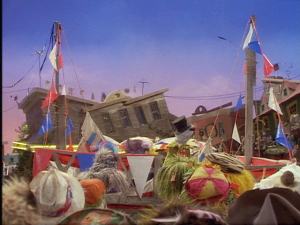 I have small kids, in case you couldn’t tell.  This means we watch some children-oriented programming around the house.  This is fine by me because A) I love family programming and B) because of A, I know what to look for.  This means Sesame Street is a staple of our house, and Dora the Explorer is not.

Individual episodes are fun, but movies are better, because they’re longer.  There are currently only two Sesame Street movies out there: Follow That Bird, which is a bit harder to follow for my kids because it has a coherent plot and doesn’t talk down (this is a good thing).  And Elmo in Grouchland, which is hard not to call an extended version of Elmo’s World.

It’s not a great movie, but it’s not bad.  It’s not as enjoyable for adults as “Follow That Bird”, but that could be the nostalgic factor.  But there’s one thing in the script that dawned on me that’s absolutely genius, that a lot of people likely missed. 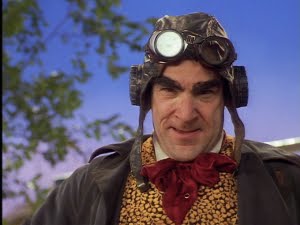 When Elmo goes to Grouchland, his blanket is immediately taken by the antagonist, Huxley (played by Mandy Patinkin).  Grouchland is terrorized by Huxley, who grabs anything he likes–dolls, lollipops, lamps, yachts, tissues, etc.  It’s not that he even wants this stuff, but he loves knowing that other people do not.  I don’t know how long he’s been there, but what if he’s been there a long time?

What if he’s taken so much from the grouches that he was the reason they adopted a culture of trash.  Huxley takes everything of value from them.  The grouches can’t or don’t fight back, so the only thing left in their world is the less valuable goods and services.  So eventually their culture evolves to the point where the least desirable things become the most desirable.  Anchovy ice cream and worm pie are delicacies.  Acts of kindness are refuted.  Hoarding is a common trait.  It’s a miserable society, and that’s the way they like it.  Because they have to, thanks to Huxley.

At the end of the movie, Huxley is arrested.  Does this mean the grouch culture will eventually return to a value-based society, or will they continue on their path of cynicism and selfishness?  Only time will tell.