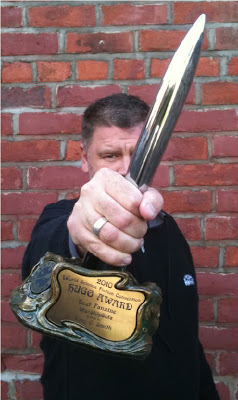 And of course, as soon as I’m done reading the Nebulas, the Hugos get announced. Lots of crossovers this year though.

Remember — the Hugos are a popular vote, voted on by anyone who pays money to Worldcon to become a member.

And finally some observations.

First, it is totally awesome that Jim C. Hines got nominated for best fan writer. I don’t even know how he got it, he actually posts as many pictures of neat Lego sculptures as he talks about science fiction. I can’t imagine what he must be feeling right now — he’s just a regular guy who only gets the time to write on his lunch break, like me. But this proves that the little guy can make it into a recognized author. And its inspired to dedicate more strength to my writing, less time to funny videos and Internet kerfuffles. I need to focus on the positive. I’m not going to become a science-fiction writer by being a cynical, argumentative person. The more time I dedicate to hate and insults is less time I’m writing.

Next, like I found last year, some of the nominations are very strange. One, under “Best Dramatic Presentation (short form)” is “The Drink Tank’s Hugo Acceptance Speech” given at last years Hugo’s for best fanzine. It made a splash last year, but I didn’t watch it until day. It’s passionate, it’s lovely, but… well, maybe I’m missing something, but aren’t these awards supposed to be for creative works? I guess one of the criteria for creation is that it’s got to be pre-planned or engineered, at least in mind. This is not acting, this is not a planned skit. This is simply a spontaneous reaction.

Then, there’s John Scalzi’s “Shadow War of the Night Dragons”. This… well, this story was an April Fool’s joke. It was meant to mimic a real book release, written as a parody/satire of the prolific trend of dark fantasy. You know, girls with back tattoos and daggers looking at the moon. But… it’s a joke. A long form joke, yes, but, it’s really not meant to be taken as serious literature. Although Scalzi makes a good point about humor getting a nod. That’s fine, I’m all for funny. But it’s like the situation in The Producers, where someone attempts to make something bad and it’s critically revered. Ah well, sour grapes.