Soooooo… what happens at the end of Ghostbusters?

I mean, yeah, they defeat Gozer, cross the streams, save the world, and everyone gets diabetes from the marshmallow covering the city.  Sooo… then what?  We know what happens to the characters from Ghostbusters 2 — the city sues them into bankruptcy and they all go their own separate ways.  But that doesn’t tell us what happened to the ghosts.

As far as I can tell, there is no link between Gozer and all the ghosts appearing in the city.  Slimer’s not an agent sent by The Traveler.  Zeddmore makes a mention to Ray that the proliferation of ghosts might signal the “end times”, but that’s just lampshade hanging.  Correlation does not equal causation. I can’t tell if Gozer was an effect of the ghosts appearing or the cause.

The instantiator of the third act is when the demon dog cracks itself out of the statue.  As far as I can tell, there’s nothing to cause that.  No mass of ecto-energy or anything.  No catalyst, no trigger.  And after that, they create the keymaster and gatekeeper, and that lets Gozer the Gozerian into our dimension and bless us with a plentiful crop of marshmallows. 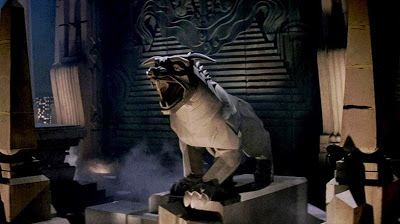 Is that the driving inciden for “The Real Ghostbusters?”  That now they have to go back and catch all the ghosts that were let loose?  Maybe there was some kind of spirit world doorway going on, but I didn’t see it.  Someone, feel free to enlighten me.

Not that I’m complaining.  I mean, I can’t not acknowledge Ghostbusters for the awesomeness that it is.  For some reason, this suddenly came upon me and bothered me.  Maybe because of GB in the news, maybe because I’m learning the mechanics of storytelling.  But I’m not sure how the first act connects to the third.  The protagonist and antagonist really have nothing to do with each other.  This is a concept that translates better to a TV show (and guess what, it did!)

Maybe instead of a reboot, we should be looking toward a TV show series, like Agents of S.H.I.E.L.D.  The magic in Ghostbusters is not in the plot, but in the likable cast.  Like Friends, Seinfeld, Cheers, Frasier, the true magic in a show is not the obstacles they face, but whether or not you want to spend time with the people for half an hour every week.