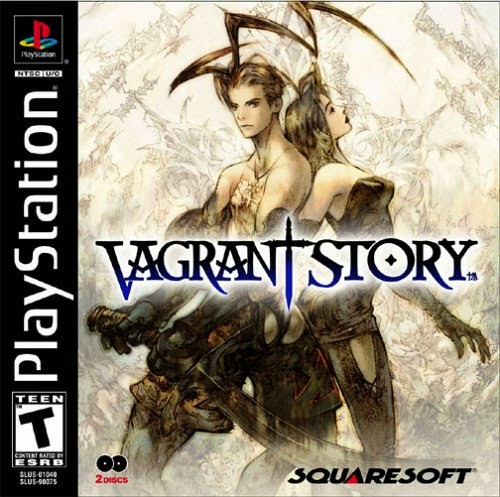 Vagrant Story is an action RPG, meaning you sort of attack in real-time and sort of don’t. Somewhere between Legend of Zelda and Final Fantasy VII, the truth lies. In reality, it’s like Parasite Eve‘s system, but with less guns (unless you have a crossbow). You play as Ashley Riot, my award-winner for best badass this side of Rambo (“Reinforcements? I am the reinforcements.”). You plunge into an abandoned city rich with history, wine cellars, and demon monsters. You’re trying to find the duke’s kidnapped son and pursue his effeminate kidnapper, while everyone else in the world tries to kill you.

Two aspects of the gameplay jump out at me. First, chain attacks. Every time you hit a monster you have the opportunity to add onto that attack that can do additional damage, heal you a bit, or some other minor effect. But that’s only if you time it right. The cost for doing this is building up “Risk” – the more Risk you have, the less chance you have of hitting your enemy in the first place. I got so good at these timed attacks that I would be pounding on some little guy, not realizing that I was building up 100% Risk while my enemy was long dead. The only way to get rid of Risk is to wait until the meter goes down or eat some rare items. I have to smirk when I remember that I actually had to stop myself from chaining attacks at some point.

The second is weapon building. The kind people of Müllenkamp saw fit to include several blacksmith shops around town, and you can take the numerous blades, hilts, shields, armor, and gems that monsters drop and spend hours recombining them to get some awesome shit. Each enemy has a type, an affinity, and probably some other attributes that make certain weapons better than others. Undeads don’t like silver and dragons don’t like piercing weapons and so on. But the best part is that you can name your weapon (probably so you can better distinguish what it’s for). This is the best part, because then these weapons become your own. “Blood on the Moon” isn’t just a silver dagger. When you pull out “Dragonslicer”, you know you mean business. And it fits in with the Norse/Germanic environment.

Speaking of environment, this swanky place has got of style. First, all the characters speak with Shakespearean flair (I don’t know how the JP localizers managed that). The main antagonist has metal arms who can summon monsters (reminds me a little of Full Metal Alchemist, come to think of it) thanks to the wicked tattoo on his back. Your supporting bad guys are religious knights templar, with a devotion to God that includes blood on the blade. Of whom the leader’s girlfriend is a loopy psychic. Oh, and did I mention the main character has lost his memory and may or may not have killed his family? The skills you gain throughout the game are really his repressed memories coming forth.

But where do these characters fit in? Well, they fit into some sort of semi-medieval setting, but 90% of the game takes place in a city that was once the home of a magic-worshipping cult that was destroyed in an earthquake (or was it?). The city doesn’t really look much like a city. It’s more of a series of interconnecting rooms in a simple map, with each room named like “Surgeon’s Keep” or “Flowing Towards Wine” that sounds like Tai Chi moves (aside: I’m amazed at the depth the developers went to fleshing out the world). The world is bleak, composed of more washed-out browns than a toddler’s watercolor, but the play control helps keep it fun.

Beyond that, there’s a lot of block puzzles, platform jumping, key finding, and button hitting. There are some cool enemy weapon drops, like the antagonist’s sword, and the final sword that looks like a cross. To get that one, you have to go in and out of a room repeatedly, waiting for an enemy with this weapon to spawn. I did this, and the first time, it didn’t take as long as I thought. Note that I said, “The first time”, which does not bode well. Upon receiving this best sword, I thought, “well, before I save, I want to try this out on someone”. So I moseyed on over to Asura, one of the optional bosses, thinking it would be easy now. Psych! Fail! I lost my sword, and this time it took three times as long to get it to spawn. I learned an important lesson that day.

I always said that if I was going to get a tattoo, I would get the rood inverse on my back – a symbol which figures prominently into the game, and looks like a celtic cross. Of course, that would look rather unsightly now, with the wife and kids. I think Vagrant Story is up there with my top three game environments that I would want to be in. It’s high time someone made a sequel to this game.