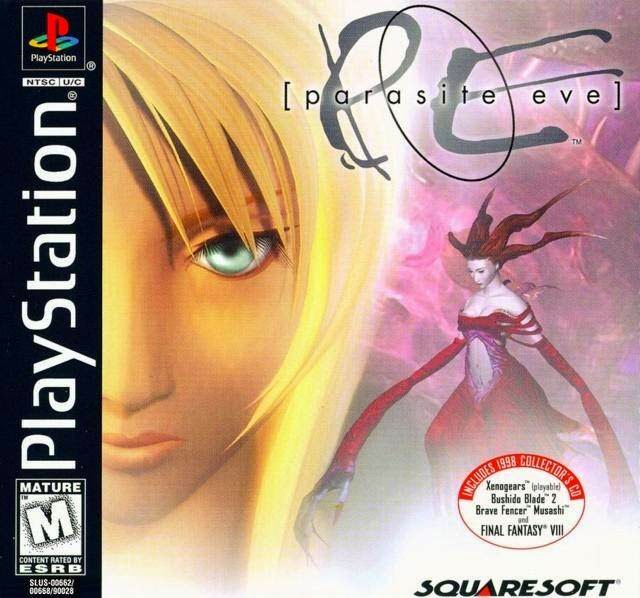 If you can’t I started going on a Square kick during this time. I mean seriously, they made the best games, and FF7 kicked off their domination of the video game market. RPGs were their forte, but Parasite Eve was a great blend of action and RPG story.

The game wasn’t terribly action-oriented. It was sort of a hybrid action/survival horror/RPG. And whenever you make a hybrid, you ultimately come up short in points that make those respective genres great. Parasite Eve‘s joy was in story and weapon building. The fights weren’t really spectacular – it always looked like you were running on ice – then you shoot, you get attacked, and so forth, in kind of an RPG atmosphere where no one is really making contact.

But that’s a view through retrospective lenses. At the time, it was what I wanted FF7 to be – an action-oriented game more like Zelda where attacks were real-time and didn’t jar you out of the scene (although I can’t say Parasite Eve really succeeded in that aspect).

But that wasn’t the best part. The best was watching the cinematics – rats and dogs turning into disgusting creatures that would make John Carpenter’s The Thing jealous. People being set on fire. Helicopters firing missiles at big goo-men. Awesome. This game is a good example of full use of FMV instead of making it the focus (like Galerians) or not utilized enough (like Vagrant Story). The story took you through several different areas, all in a realistic perspective, instead of ridiculous J-Fantasy. The story is as complex as any novel – I remember trying to find the novel, because I wanted to read it, but it was never released in the U.S. Besides, I understand it had nothing to do with the game.

My biggest memory of this game is the Chrysler Building. This is a New Game+ bonus level that consists of 80 random floor levels. Fortunately, this was less of a problem for me because I had the strategy guide. I’d like to mention here that I didn’t buy the strategy guide. My friend, who I inherited many games from after he was done with them, also usually got the associated strategy guide (he didn’t have a computer). So that became bequeathed to me as well. But even the strategy guide didn’t know which level it would be. Plus you can only save every ten floors, and I don’t even remember how long it took to complete a set. Especially in the later levels.

One time, when I was playing, my dad needed to trip the circuit breaker for some reason. Of course, I was in the middle of a game – if you leave the building before your ten floors are up, you have to start all over. So I asked him politely to wait for me to get done. I must have been on the sixty-seventh floor or something. Anyway, he just sat down beside me, waiting till I was done. I told him he was making me nervous (I had already died once before at the boss – like I said, can’t save). He just said there was nothing for him to do until I got done. It was quite nerve-wracking. Sometimes I wonder why I play games like this – it’s not like the catharsis is worth the tension. The Chrysler level was difficult because it wasn’t fair, it became frustrating instead of fun.

If I recall correctly, I had tried going through the Chrysler building once before, I can’t remember why I stopped. I do remember that my problem was I couldn’t defeat the boss because my weapon wasn’t good enough, and there was no way to get better. I had to play again from the start and build my weapon with the final-final boss in mind. I remember agonizing over what it should be – a shotgun? Did I need the spread? A rifle? Did I need the distance? My ATB gauge filled almost instantly, so I didn’t need time. What combination would give me the greatest advantage? At a certain point, you can’t modify it anymore.

So I went in there. I tried my best, and I did the damage. At some point, I must have calculated how many HP I was damaging vs. how much she was curing herself, and I realized it wasn’t enough. My weapon wasn’t good enough, and I would never defeat her. Dejected, I tried one more time, just for the hell of it. I couldn’t just give up. Remarkably, she did go down, and rather quickly. I didn’t know my own weapon’s strength.

I dream of someday writing a Parasite Eve movie script, just like I mentioned before with Super Metroid. There were rumors back in the day of a PE movie being made with Madonna or Scarlett Johanssen attached and little resemblance to the game. I say feh on that. I say blow up the Statue of Liberty. Let’s see some hot shotgun-on-resurrected-velociraptor action.