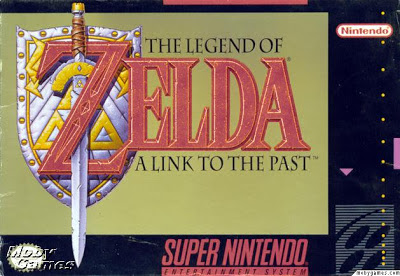 We come to the end of my elementary years and into what we call “mature gaming”. I almost didn’t get A Link to the Past. I remember I was in Best Buy and deciding between that and Mortal Kombat II. My reasons were that, although it was a popular game, I didn’t like RPGs (which this wasn’t, technically, but that’s beside the point). I got interested in it because my grandpa had it. For some reason, he had gotten a Super Nintendo, for his cabin in the north woods. The only other game I remember him having was Tinstar – a super scope shooter, for which he had no super scope. So you can see he wasn’t particularly VG savvy when he got it. Also the fact, I remember beating the game for him, and at the end when it scrolls past the number of game attempts (times you either died or turned off the system), each level was in the hundreds. I remember Swamp Palace in particular had 758 game attempts.

Link to the Past was my introduction to video games with stories. I mean, where the actual story was in the game, not one that was made up to go along with the gameplay. There were characters, there was development, there was conflict, and most of all, there was surprise. I thought the game was over when I finished the third palace and defeated Agahnim. No, there are seven more palaces you have to much through, plus you have to deal with a second world.

And then there’s all the little things, like the guy in the sanctuary, the lumberjack brothers, the little used Lake Hylia, trying to enter the Desert Palace. This all creates a rich environment, one that any MMORPG should be envious of. You actually wanted to be there in Hyrule. And the silent protagonist lends itself well to putting yourself in the character. Whenever there’s a silent protagonist, like Link or Gordon Freeman in Half-Life, I find myself shouting out what I think I would say in that situation. This translates to a lot of “yeah, right”s, and “Oh shit there’s a giant fucking alien about to stomp on my ass.” I think this should be considered a compliment to the game designers.

You can easily see how inspired I was by this game, since I chose to place Gatecrash there instead of the more appealing “Ocarina of Time”. Of course, the reason for this was that Ocarina of Time wasn’t created by the time I started Gatecrash. But I don’t think I could have done it in Ocarina of Time. For one thing, there was already a lot of Ocarina of Time stories. But the Link to the Past world and characters gave me more freedom to explore. I was able to put in a royal vizier, use the pendants as a plot device, and use the comicky style of the world to my advantage. With Ocarina of Time, there’s a lot of apocalyptic stigma and time travel that make the world more mature. I didn’t want that, and it doesn’t blend well with Mega Man.

Sometimes I played for hours, sometimes I tried to get through the game as fast as possible. Sometimes I got everything, sometimes, I got a few things. But I think this might be one of the games I finished the most (not played, but played to completion). Maybe because I was doing research for Gatecrash, I don’t remember. But this game always sticks out in my mind as the one that brought me closer to writing, and closer to learning what a story was.