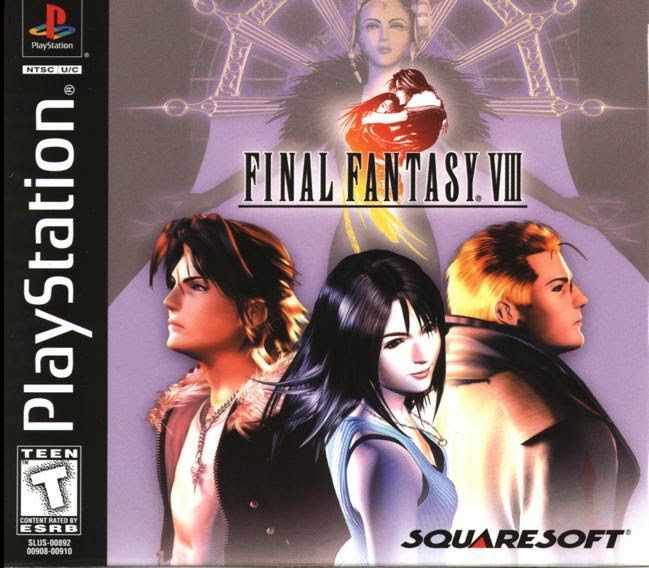 Although FF7 was my gateway drug to squarecaine, and it is a superior game, my heart really belongs to Final Fantasy 8. Why? Because I love the characters. FF7 had fun characters. Wacky characters. But FF8’s were more real and spoke more to me – high school kids, brooding, and love in the face of obstinate people.

FF8 is the story of Squall and how he met his love Rinoa. There’s no two ways about it. FF8 is the only FF I know that really focused on a love story. I mean, the logo is the two main characters embracing. FF8 is about a relationship, rather than an alienated individual finding oneself. Of course, through the relationship, Squall finds himself, but that’s okay. This is why this game is closer to me than any other Final Fantasy, because I can deeply identify with the main characters. I think I must have subconsciously chosen friends like them in college, because they resemble the ones I have now.

Squall is brooding. Zell is overly-energetic. Selphie is spritely. Irvine is cocky, but sincere. Quistis is serious. Rinoa is flighty and sensitive, but full of heart. Seifer is bitter and angry at being passed over. Seifer and Squall are great rivals, cut from the same cloth, two sides of the same coin. Seifer could have turned into someone like Squall and vice versa. That idea fascinates me and prompted me to write Black Hole Son. When FF7 went big, I think Square spent more time on localization, making the characters more adult and less fantastic. This made it better to relate to them. That’s why the FF8 story succeeds.

But the magic system did not do as well. After playing FF7 it was weird going to a different magic system. I had no idea it changed every game, so it was bizarre that the sequel worked totally different, yet the same. No more buyable/findable materia. Now you spend time drawing, refining, and assigning magic spells, like a manufacturing industry. Snooze. I’ve got to spend my fight extracting spells from people so everyone’s stacked sufficiently. Not too fun, and the automatic assigning of spells makes things too easy. The first playthrough, I let the comp do everything automatically. The second time, I did some of it myself, which led to even more powerful combinations. But there were no way to get cool chain effects, like all + blizzaga, or final attack + phoenix. No opportunity to create.

My only real significant memory of this game is watching my friend beat it for the first time. Like FF7, I had only partially watched and had no idea of the significance of the battle, or what happened when all his characters died. Final form, and the ultimate attack wipes out everyone. Dammit. Oh but wait. The Phoenix – a summon that randomly appears on total KO – comes up and resurrects everyone. Saved! He went on to defeat the final boss in a spectacular battle.

My love for Final Fantasy 8 can best be summarized in my sole Final Fantasy fan fiction. This is another reason I like FF8 better, because the fan fiction tends to be of higher quality. Most FF7 fan fics are just resurrecting Aeris and making Cloud choose one or the other. FF8 has a lot of ways it can go, which can be demonstrated in Baby Blocks – many subplots, many dynamic characters, all in one world. Like Squall says at the end, “It never will be final. Some might call it an end just because there’s a conclusion, but that doesn’t mean there is an end. They don’t realize that there’s no such thing as an end to it. In fact, it’s the opposite. One end starts a new beginning, and on and on. Though something might seem final, it clearly isn’t the end. And I for one hope it stays that way.”