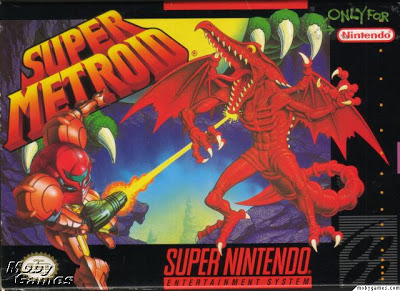 Super Metroid was a game I almost didn’t get. I played the original Metroid once and I didn’t like it. The play control was clunky. The world was too complex. Maybe the free-roaming scared the little me. Maybe the graphics looked stupid – a little plastic toy jumping around. Granted this was one of Nintendo’s earlier achievements, but I liked games like Mario and Mega Man, where your goal was obvious and your path was direct.

But Super Metroid was a popular game. I think it might have been the last SNES game that I bought. With the N64 on the horizon, new games were drying up in anticipation. Maybe I got it because I was looking for something to play. Again, Nintendo Power gave it a very favorable review, and it was always at the top of the charts. So I said, well, I’ll give it a try. Fifty million people can’t be wrong.

What Super Metroid turned out to be was one of the most emotional games I had played up to that point. The introduction sequence gives great atmosphere – after a brief summary of what happened before, you run to the space station holding the last metroid (who thinks you’re its mom), finding bodies everywhere, and discovering the space pirate Ridley. After a brief firefight you escape and run to Zebes where the game really starts. You feel isolated. It’s always raining on the surface, and the underground of the planet ranges from caverns, to marshy water tables, to lava tubes (with the lava still there). And the monsters reflect this. Space pirates wander the caves, annoying little critters in the chasms, and well-armored foes deep underground. The animation is superb. When you turn around, your character actually turns, not just a mirror of a sprite. And you can see the arm cannon on one side, but not the other.

The gameplay encourages exploration, with objects being seen, but not reachable until you gain something. You can see the phantom ship, but not reach it until you get a high jump. You can get to Norfair, but you can’t walk around very long unless you want to die in the lava. There’s something about seeing a world you can’t get to that messes with your goals. It makes them more direct, more tangible. You spend all your time trying to get to Norfair instead of saving a metroid.

It’s a good example of a story unfolding as you play through. It never tells you anything directly. The only speech/dialogue occurs at the beginning. You’re on your own – a girl in a power suit against an entire planet. There are things here and there – the etecoons, the phantom ship, the statues of the four primary bosses. It reminds of me a lot of Shadow of the Colossus, where you’re isolated on this vast land. The only things alive are you and your horse (and a few lizards and birds). Your only communicating companion is a disembodied voice in a temple.

The fascinating thing to me is the eclectic characters. You’d expect space pirates to be human, but they’re more like walking praying mantis. Ridley, your arch-nemesis, isn’t a human rival, but a giant red dragon working for Mother Brain. I always assumed these characters were civilized (as civilized as space pirates can be), and that they interacted in the universe, kinda like Star Wars. The rest of the bosses seem ambigously defined. I wish there were more of them. I love boss battles, but you never felt unsatisfied with the game at any point.

And that brings us to the ending. This would be one of the most emotional moments in video gaming until a girl named Aeris gets skewered like an hors d’oeureve. Spoilers ahead. When you reach the inner sanctum of Mother Brain’s layer, after fighting mocktroids and cloned metroids (a difficult-to-defeat enemy), you encounter a long hallway, lined with sand, and monsters that you’ve already seen around the game. But they’re dust – sandy forms that dissipate to ash at the slightest touch. What happened here? Then you see it. A giant metroid five times the size of any you’d seen before. Jesus Christ, get it off me, get it off me. Its invulnerable to your ice beam and missiles. Its draining you to your last energy tank. You’re about to see the game over screen and this time there’s nothing you can do about it. Maybe you can find an alternate route when you respawn.

Then the metroid stops and gets off. It coos gently, and you realize that THIS is the metroid that you saved from the home planet. The Nintendo Power comic explains that it’s gotten bigger from being exposed to gamma rays, but either way, it flies off and you pursue it.

Deep under Zebes, you encounter Mother Brain’s final hallway. If I’d played the original game, this would have more impact on me. After dodging a gauntlet of energy balls, you crack open the jar holding a brain, and pummel it with missiles. It plops on the floor, and the room turns dark. Looks like you won.

Until the floor starts rumbling, and a big eye opens. The brain grows into a giant beast. The battle ensues, but Mother Brain is too powerful and reduces you to a fraction of your energy. As it rears its head for the final blow, the metroid swoops in and attacks it, draining its power and reducing it to an ashen statue. The metroid flies off and hovers over you, replacing your power. But Mother Brain isn’t dead. It slowly recovers and starts attacking the metroid. But the metroid won’t let go. It continues to feed you power, protecting you all the while. Once you’re full it flies off and, with one final blow from the enemy, it collapses and dies.

It’s not much, but it represents something that carried over to future video games – the sacrifice of one so that others may live. It’s a powerful motif and one of my favorites. I dream of someday, when I’m a writer with a capital ‘W’, of writing a Metroid movie script. The premise of the Metroid games is too good just to let go as a B-core title.