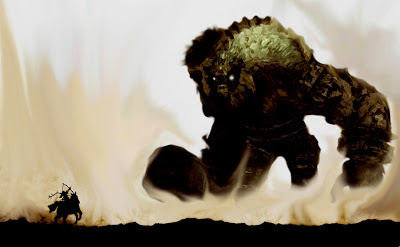 All right, this has no place in a writing blog, but I’m going to say it anyway, because maybe it’ll get me some hits.

Quit your crying over Shadow of the Colossus.

Seriously, get a tissue for your issues. Every video game writer in the world thinks this is Steel Magnolias for the PS2. You can’t read any article that refers to SotC without telling you how they filled the trash with kleenex boxes as they plunged a sword between a giant minotaur’s eyes again and again. And why can’t every game be like this, it’s the pinnacle of story-telling. It’s just a video game, get over it.

Here’s why SotC is not the end-all and be-all of games. One, the story: there is none. I don’t care what you say. Final Fantasy has a story. Mario has a story. This is a mad lib. Too many blanks that never get filled out, even in how to play. I didn’t know that you can pray at one of those strange shrines around the world and save. There’s no tutorial that says circle is “pray” if you’re at a shrine. I had to wait til I killed a colossus in order to save. The game tries to make you forget you’re playing a video game by not telling you anything. But it fails because IT IS A VIDEO GAME! TELL ME WHAT THE BUTTONS DO, FOR CHRISSAKES! 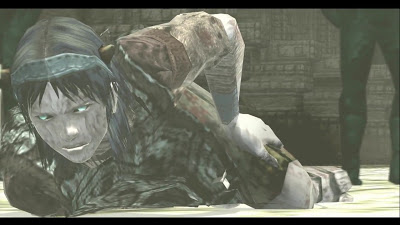 The introduction is a guy (with no name) laying down a girl (with no name) on a slab in a castle (with no name). His horse gets a name, but the protagonist and his macguffin? Sorry, didn’t have the budget for everyone. A voice from above (with a name, but it doesn’t matter, he’s a faceless, omnipotent hole in the ceiling) pipes up. There’s a dull exchange with all the predictable pleas, explanations for things we’ve already figured out, and saber-rattling, until we get to the point – you want the girl? Kill 16 moving statues you can find around here, but I won’t tell you where. That’s very little motivation. It gives you no chance for what I call character insertion (which is what I call it when you get to pretend to be that character, along the lines of escapism). A lot of reviewers praise this minimalism, but I don’t. How can I be a character if I don’t know who he is? Is he a skilled warrior or just a ragtag boy? Is he chosen by destiny? Does he love this girl? Does he have any thoughts or feelings whatsoever? There’s no explanation for who this girl is or what his relationship is to her. She could be the maid. How can I save the girl, if I don’t know why I want to save the girl.

At least in the story. Then around the fourteenth (out of sixteen) colossus, we see a band of… somebodies… riding horses toward the central castle base. Once again, no idea who they are, what they’re doing here, or why they’re here. Should we feel threatened? Encouraged? Are they a gang of thieves? Castle guards? Going to give us the butt sex? We never know. Until they finally get there, after the final boss, where we learn they were here to kick your ass. The inevitable and unchangeable ending ensues, which, while a bit of fresh air (as you get a POV of a colossus for a brief, and ineffectual, while), is as confusing as it is emotional. Yes, I hung onto the side of the well for as long as my stamina held out, hoping for salvation, but sadly expecting to get fried. But the point is, I knew I was supposed to get fried. That makes it tragic (uncommon in video games, but refreshing) but only in the sense that Julius Caesar is tragic. The hero had a fatal flaw, he messed with the sacred, and now he’s in some shit. 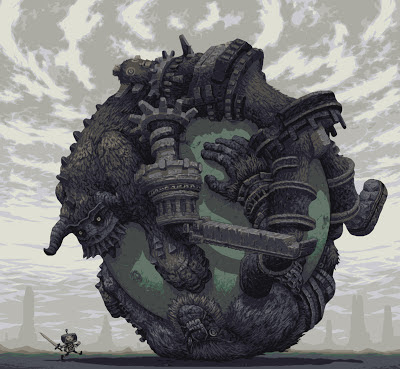 Two, the colossi (which is a funny word): Again the video game journalists are weeping their eyes out because you have to kill the colossi. Substitute “kill the colossi” with “actually play the game”, and you’ll find out how ludicrous that is. Oh, but here’s the rub, the colossi don’t want to be killed. Some run away, some only act when provoked. And they’re all acting in self-defense. Well, fuck yeah, they’re acting in self-defense. Everybody you kill in a video game is acting in self-defense, aren’t they? I’m spending twenty hours running all over the world after Ganondorf to kill him. He’s sure not coming to me. Bowser’s just hanging out in his castle, until Mario comes down to collapse his bridge. If you were Bowser, would you want Mario throwing you in the lava? No, so you breathe some fire to stop him.

And here’s the thing about the colossi. For as many of them as they claim that are innocents, the rest of them are coming to kick your ass as soon as you show up. The final boss is a jerk who will rain meteors on your ass if you so much as pop your head out the rabbit hole. The little ones charge like rhinos, and the big ones try and crush you underfoot or shoot you with lasers. They act like animals. Some like cornered animals, some like predatory animals. But killing animals is not sad, we do it all the time – because we’re hungry, because they’re pests, and because it’s fun. The colossi are not to be mourned for. You might as well be killing a robot. 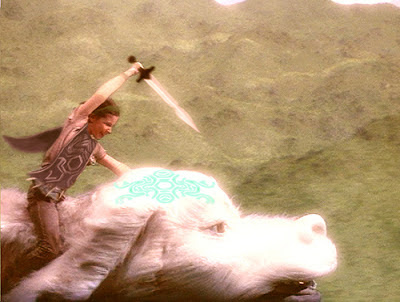 Three, the game play: The entire game consists of killing the colossi. That’s it. Seriously, that’s it. Well, you have to find them, but that’s not hard. I only had trouble finding one, and that’s cause I got turned around in the forest. The whole game takes place in very washed out area. And while I’m not going to criticize the graphics, because I consider that irrelevant (although I will say my wife was confused that I wanted a game that looked last-generation), the environment is pretty bland. There are no dungeons, no puzzles, no mazes, no secrets, no side-quests. In Ocarina of Time, there’s plenty to do in the wide world, and it’s about the same size. You can arrow ghosts, drop into holes, bomb rocks, explore caves, swim in the river, look for heart containers, trim grass, get rupees, play mini games, buy products, and kill enemies. And that’s all on Hyrule Field alone. There’s none of that in this game. In fact, I didn’t even know there was a way to artificially improve your life bar and stamina until I had finished the game and looked on GameFAQs. But that “side-quest” isn’t very fun, and too difficult, especially compared to the main quest of the game. Once again, more stuff the game didn’t tell me about and I never would have found if I hadn’t “cheated” (but that’s another article. I’m looking at you Final Fantasy 10).

Then when you finish the straight beeline to your target, the game loses its appeal because you’ve figured out how to kill them. I finished the game in eight hours. Which is damn short these days for a non-puzzle, non-kids game. Thank god for the time trials or the game would have no replay value. The bonus items are fun, but really, if you were able to kill the colossus so easily without them, how much more fun is it going to be when you’ve got a super-sword, invisibility, and can outrun The Flash. The colossi are the only ones you can really use the items on. And teasing a colossus is like playing with your food. Sooner or later, you get hungry.

So, in conclusion, quid pro quo, errata et demonstrata, vis a vis, and il vino confuso, Shadow of the Colossus is not a weep-fest. It’s just a video game. It’s a video gamer’s video game, meaning it’s been played fifty times by as many people. It’s become an avenue for pretentious IGN and GameSpot article writers to point to and whine ‘This is what video games should be like’ and ‘here’s a video game that makes me sad. Why can’t you all be like that?’. That’s not to say it’s not a fun game. I liked playing it and intend to play it again. But it’s not Grave of the Fireflies. 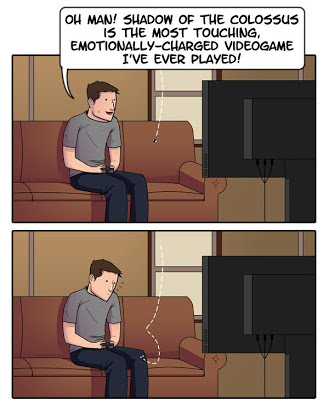