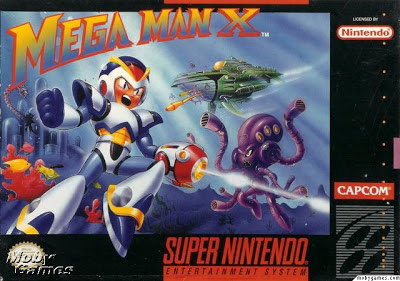 I’ve already written here about Mega Man in my elementary years. For some reason, Mega Man grew up with me, into Mega Man X. Capcom, in their infinite wisdom, instead of just porting the next Mega Man over to the SNES, made a whole new advanced Mega Man, and thus starting a series of timeline inconsistencies that they would soon regret.

Mechanically, the game is the same – eight bosses, each strong and weak against someone else’s weapon, a few end levels in the fortress, and an ending in which nothing is really resolved. Sound familiar?

Or was it? Mega Man X starts off in the instruction booklet. You read Dr. Cain’s diary as he extracts the robot equivalent of a baby in a basket with an attached note “Please find him a good home”. You discover that this particular robot is the first robot to think. Meaning, mentally, it’s indistinguishable from a human. Then they made a hundred clones of him called reploids. Then some of the reploids decided to get a little punchy and went “maverick” (awesome word). And now there’s a whole big war of reploids vs. mavericks, and Mega Man X, feeling responsible has decided to join in the fight. There’s no Dr. Wily, no Dr. Light – they’re long dead. There’s no Rush, no cutesy characters with big eyes. Mega Man has grown up.

And you know you’re in a different Mega Man when you start up the game, and you receive the same message (presumably) that Dr. Light put on his suspended animation capsule, saying “Do not press unless you really, really mean it!” And when you start the game, you don’t get the menu, you get plunged into the action on some sort of highway. And there are giant bees trying to cap your ass.

The introductory highway stage was always my favorite. I’m not sure why the programmers put it in there, it’s not like you had new controls to learn. But it provided an introduction to the new history – namely Boba Vile and Zero.

Ah Zero. Fan girls of the world unite. Before, Mega Man was always the hottest shit. Now you find out there’s a more powerful robot out there, and he’s leading the way. He’s got a cool blaster, cool tail fins on his helmet, and cool hair. He’s everything you’re not. No wonder he rocketed to stardom. But, as you play the game, you can become as cool as him. For the first time, you can upgrade yourself. New legs, new helmet, new armor, and a new blaster, new life bar, and if you know the code, a new hyruken.

You no longer fought against little dolls with weird helmets, but animals that looked like Dr. Moreau and Isaac Asimov got bi-zay. These guys were big. Lots of the bosses were big, and they got bigger, but so did your weapons. No more dinky metal blades or bubble lead. You could summon whole tornados. And each weapon was as upgradable as your blaster.

Each of these had to do with gameplay, which was cool – you can’t have a video game without gameplay. But it was the nuances of the story that were cool. The end of the highway, Zero’s sacrifice, Mega Man X’s monologue at the end. And little bits here and there, like Zero’s dialogue with you, Dr. Light’s capsules, and environments that changed. This was the first Mega Man game I had played since Mega Man 3 and the differences were mind-blowing. When your health was low you could see X breathing heavily and his chest smoked. This made him seem less like a little miniature object, and more like a character. As you can tell by ZerOthello, I was fascinated by the dynamic between Mega Man X and Zero, and a lot of fan fic writers were too. And like the Mega Man before it, this was a great game to escape in when I was in any old mood. I loved robots, and this fantasy world was a great science fiction landscape.