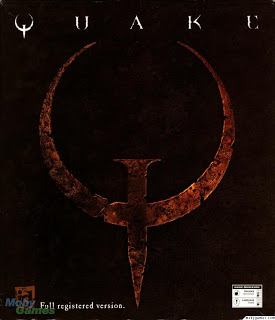 Quake is an awesome game. It was the first true 3-D game. I remember not really understanding what true 3-D as I was in Wolfenstein 3-D, and realized that the bottom of the bed was following me, tilting around me. All the popular Build games of the time – Duke Nukem, Redneck Rampage, Blood – had the same thing. But everything in Quake was a three-dimensional object with substance and depth. True, they were mostly boxes, but they were THREE-DEE boxes. No glasses required.

I bought the game wayyyy after it came out. I was reading Blue’s News and PlanetQuake probably a year after it came out. I don’t know why I waited so long. Maybe I was busy with console games. My life was on the computer, but my fun was on the Nintendo. I played the shareware version to death. That was the great thing about those days. Shareware gave you about a quarter to a third of the game – well enough to play and be satisfied. I mean, let’s face it. The rest of the game is just the same thing over and over anyway – find the key, kill the guy, get to the exit. The rest is variations on a theme. With cheats, you can get all the weapons. The only problem was it couldn’t be modded, and you’re missing some enemies.

I can remember walking through Target – must’ve been 16 or 17, because I was alone. And I saw the game on the discount rack – $25. Well, hell I’ll get the most talked-about game on the Internet for that. So I bought it. The rest of it was fun as well. I can remember one specific incident on E1M4 or E1M3. I was playing at a higher difficulty level, which I almost never do, since I play for fun, not for challenge. There’s a dark archway leading to a series of catwalks over a gray-green mire filled with zombies. I’m about to approach the archway, when suddenly the darkness lights up and a Shambler appears.

Now a Shambler is one of the meanest guys in Quake. Hard to kill, hard to avoid. They shoot lightning bolts at you while you pump rocket after rocket without effect. I always played on easy, so I was used to seeing the first one at the end of the last level (before the boss level). When I saw this thing pop out four levels earlier, I’ve never felt such fear from playing a video game. I jumped in my seat, lost control of my mouse and keyboard, then ducked back into the doorway. In that split-second moment, I was there, in the game. I was walking down a corridor with a gun in hand, in a dark dismal world.

I don’t remember if I started Quake: Player Entered the Game when I had the shareware or full version. Probably before. What I do remember was that this game had no story, but I thought it deserved one. Somebody had clearly thought about it. Each first level ends with a slipgate, but subsequent ones end in a portal. There’s a giant boss at the end, weapons that are otherworldly, and atmosphere and architecture that bleeds history. And what is a Quake anyway? Since there was no story, I started to make one.

After a lot of digging, I found a paragraph of the story so far. It starts out with something like, “You get the call at four in the morning…military complex… you pump a round into your shotgun and get moving.” That’s all I remember, but I translated it into the story, so that it became an impromptu manual for the game. I remember getting inspired at night, and writing the first part of it deep into the time when I should be sleeping. This was early in my writing career, and the second story I had written after Mortal Kombat. MKII wasn’t going so well, and I was inspired – that great inspiration where you can see everything so clearly, you know where everything’s going, the entire story exists as an egg inside your head, with all the parts there. Then in the middle, I did the manual thing – describe the weapons, describe the items, describe the enemies. Now that I think of it, I must have just had the shareware version, because I only listed the shootables that appeared in the first seven levels. And it ends when the player begins. I thought it was pretty neat. Give it a read on the sidebar, and see how the world of Quake really started.