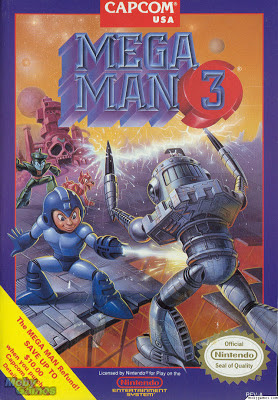 This was the first Mega Man game I played, and as you can see from Gatecrash and ZerOthello, it made an impact. I remember getting it at FuncoLand, but I can’t really remember why. I think it was fairly popular at the time. I believe I was getting Nintendo Power at the time, and Mega Man was constantly mentioned. Besides, the little guy was cute.

The more I played the game, the more I fell in love with it. The colorful graphics, the fun game play, the pinpoint play control. It was one of the most well-designed games I ever played. People didn’t flicker in and out. Objects weren’t fuzzy blobs. And I never cared that I couldn’t beat it, because it was still fun to play. Later I found a password in a magazine that gave access to the last castle. It’s one of the very few times I beat a game using cheat codes without previously having beat it not using cheats.

I’m sure a lot of people feel the same way about Mega Man 3 that I do. It introduced many of the characters that would provide the mythology (Rush, Break Man/Proto Man/Blues, Shadow Man, Gamma) for future games. Proto Man would pretty much become the basis of all future characters (Bass, Zero, etc.) – the brooding anti-hero – because that’s what the fangirls want to see.

At the time, it was the only video game that felt kinda realistic to me. It was also one of the only NES games I had that had a decent story. The others were arcade style, like Hogan’s Alley and Super C, and didn’t feel real to me. In Mega Man 3, I could jump and shoot, but I could also slide, swim, and call on a robot dog. There were characters I could talk to who supported me, opposed me, and some just got in the way. Besides Super Mario Bros. (which by this time, was getting old), it was the game I could play when I wanted to be someone. If I wanted to be a warrior or a robot or someone who just wanted to mow down everything in his path, this is the game I’d play.