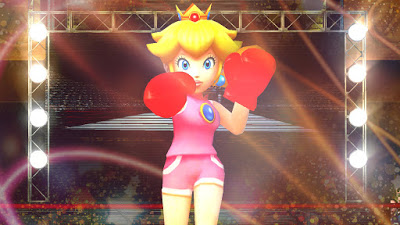 I just saw on Punch-Out!! – Did You Know Gaming? (relevant section) that Princess Peach was planned to be in Wii Punch-Out. That fired all kinds of neurons in my brain, since it’s been thinking about women and stories and video games.

It can’t be denied that there a lot of video games out there that are unkind towards women. There are lots of games with good women too — well-rounded characters that exist beyond a simple goal to be obtained. Princess Peach is not one of them.

She has a presence in nearly every Mario game, but when she’s not a simple option for Mario Kart or placeholder, she’s simpering in a castle. Rosalina has more personality than her. She wasn’t even in the first New Super Mario Bros, and games where she has been playable and fleshed-out… have their flaws.

But if she was in Punch-Out, what would that mean? Is it feminist? Anti-feminist? I almost regret it not being included because the analysts would have a field day with that one, all for some silly in-game bonus. The equivalent of Marvel’s post-credits scenes.

Now on one hand, we’re clearly dealing with a man punching a woman. And there’s no doubt that, traditionally and visually, this is an unfair fight. A well-trained boxer versus a twiggy-armed princess. No count. One punch would cause a concussion.

On the other hand, this isn’t real life. This is a video game. Besides Princess Peach, you’re also fighting a flamenco dancer, a literal “turban-head” from India who wears Bengal tiger pants, a Russian who is LITERALLY chugging a bottle of vodka in his corner, and an obese island king who may or may not be totally human. Like Insane Clown Posse, you would have to be a moron to take this seriously. It’s cartoon violence.

But it’s still violence. And none of these characters are women. This is Nintendo. Not Mortal Kombat, not Tekken, not even Street Fighter. Any fighting females are doing it with parasols and frying pans against turtles and mushrooms*. You would NEVER see Princess Toadstool strapping on a set of boxing gloves. It’s not her identity. Which is probably another reason the feature was cut.

But when I think of the weirdness and novelty of competing with Princess Peach, I feel a small pang of regret for what could have been. When I think of what kind of girlish squeals she’d make (see Mario Power Tennis) or her twiggy arms power-punching, I can’t help but smile. And that’s right — I said “competing”. It’s not just a Grand Theft Auto-style beatdown. You’re on equal footing in a sports arena. In fact, moreso, because she would be a bonus character. A challenge.

The idea/theme of Punch-Out is that these characters are stronger than you. You’re a little guy taking on giant Turks and ‘roided out Dwayne “The Rock” Johnsons. And you beat them. That’s the charm of Punch-Out. But that charm is not present with Princess Peach. It is with Donkey Kong, which is why he fits. 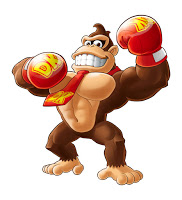 So my big question is — is this okay? It’s a fair fight. You’re competing, not striking out of anger. For some reason, we have a thing in our culture where girls fight girls, boys fight boys. But god help you if a boy fights a girl, even if circumstances demand it. It’s kind of unfortunate because when it is provoked, it leads to some fascinating results.

There is truth to the fact that, by law of averages (for very wide definitions of average) men have more upper body strength.  Which by some odd corollary translates to “all women are weaker”. In honorable fighting situations, that makes sense. But sometimes, it’s against moral code for any manly heroes to fight someone weaker.  So it’s up to the woman to take out her equal, toe to toe.  While warriors on both sides to sit back and watch the “catfight”. 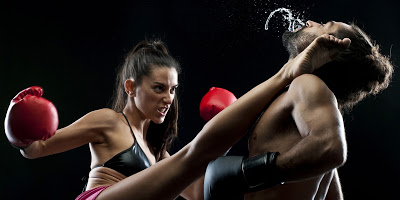 But this is a video game. And in nearly every video game, it’s you against the world. Everyone else, whether by virtue of strength, magic, or number, is stronger than you. And it’s your job to rise from underdog to champion. The human can think beyond logic, so programmers give all video game opponents an unfair advantage. If Princess Peach is one of those opponents, does that not make it fair? Does that not make gender an irrelevant issue?

I wonder Sarkeesian would say about that.

*Some exceptions, like Samus Aran and Super Smash Brothers, may apply. But Samus is wearing a genderless, identity-less power suit, and the other is the digital equivalent of smashing toys together.