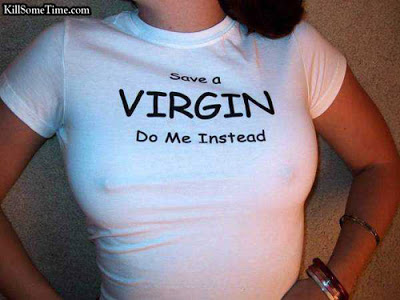 I know, I know, it’s a myth that the Koran says if you die promoting Islam, 72 virgins await you in Heaven, and that’s where all the extremists come from. Total lie. That doesn’t mean media doesn’t perpetuate it. Mostly for purposes of comedy these days. Along with the more common tropes of “virgin sacrifice”, “virgin stupid” and others.

But I was thinking the other day, wouldn’t this be horrible? You die, and you go to a place with 72 women (I’m making assumptions about orientation here. Substitute your favorite gender where appropriate). I’m not going to make the cliche joke of 72 shrews complaining and nagging. Let’s assume they’re there just to have sex with you.

But none of them know how. You have to teach them all how to have sex, and it’s going to be no fun for them the first time. As this classic Saturday Night Live sketch demonstrates, it rather defeats the purpose of heaven to make them all virgins. I mean, even experienced women still have trouble with some things.

There will be no variety. They only know what you know, what you can teach them. And let’s hope that God provides some kind of toy chest. If all you’ve got is two bodies and an imagination limited by your own experiences, you are in trouble.

Second, if you’re really into taking someone’s virginity, you only get 72 enterprises until you run out. For eternity. No more for you.

Third, where do they get these women? If they’re just made-up automatons, that’s no fun. Nothing to talk about, no personalities, no histories, no flavor. It would be like having sex with robots. If they aren’t made-up, where do they come from? Only 4% of U.S. adults over 25 are virgins, and those people are still alive. Are you going to be having sex with some cystic fibrosis sufferer? Someone with morbid obesity who can’t get out of bed?

Are you going to be having sex with some 12-year-old who got in a car accident? (Maybe this is her hell?) Or is your heaven going to be littered with 72 toddlers and stillborn babies? That’s sick!

There’s nothing really great about virginity. As far as real life goes, it’s something to get out of the way. These days, what people think of as virginity is really chastity. But they’re hinged on the technical aspects, thinking they equate to the spiritual aspects. They don’t. So claiming to be a virgin while doing all that other naughty stuff is like saying you’ve never drank orange juice, but you’ve eaten an orange. If that’s the way you’re rolling, you may need to rethink your reasons.