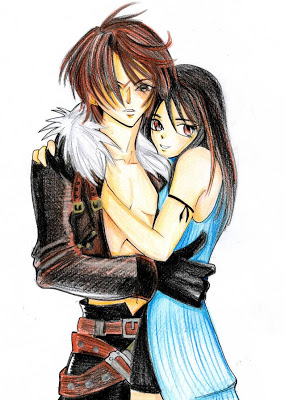 Ashbear is the premiere Final Fantasy 8 writer and this is her top story. In fact, this might be THE top story.

Let me explain. When I was younger and had way too much time on my hands, I wanted to read good fan fiction. Unfortunately, FanFiction.net, the premiere source for fan fiction, does not have a way to rank stories. You can add favorites, you can post reviews. But there’s no objective way to tell whether a story is well-liked or not. I always thought the site should at least have some sort of “Blam” functionality, like Newgrounds has, where works below a certain rating are deleted. So what did I do?

I looked at the Favorites list of every writer of FF8 fan fiction and tallied them up. That’s 466 pages of data. And Ashbear’s Castles in the Sky had the most entries. That’s pretty impressive for any writer.

The premise behind Castles in the Sky is that Rinoa was in a car accident (doubly ironic since her mother died in one) and is now blind. Squall is hooking up with another SeeD called Lauren. And there’s emotional issues, angst, and romance all over the place. But the key is that all the characters act accordingly to the plot. The mood is a little like Twilight, if it was good. It’s better than any soap opera.

Personally, I like Crimson Lies better for the darker tone, but it’s the difference between apples and oranges. Ashbear makes her characters shine brighter than the sun in any story. Castles in the Sky has lighter humor, such as Squall’s run-ins with the touchy-feely duchess and Zell’s interminable bounciness. There’s also a good deal of characters holding the idiot ball and jumping to conclusions when a simple question/answer conversation would have cleared things up. But Crimson Lies had that too.