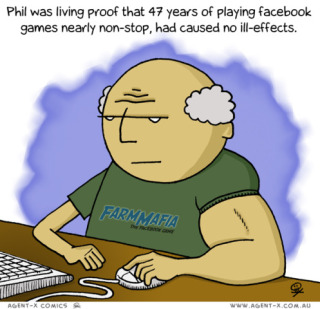 I don’t need to write how these Facebook games are huge time-sucks. Those articles are already out there.

What I do need to do is tell you that I’m a victim. And I’ve realized why they’re stupid and that, difficult as it is, I’m stopping playing them.

First I played Knights of the Crystals because, well, it’s a Final Fantasy game. And I guess I’m always trying to recapture that feeling that I first got from Final Fantasy VII. Cannot be done.

While I was doing this, I played some CityVille, because my cousins were playing it. It’s now more popular than FarmVille. I was trying to recapture the satisfaction of SimCity — building and maintaining a thriving, well-loved metropolis. Cannot be done. Plus I’ve got my iPod Touch that has Haypi Kingdom and Gun Bros. One is a “gather resources, build armies” game and the other is an action shoot-em-up (at least that one acts as a video game).

And there’s only two ways you can ever really advance in these games. One is to get friends to play. The more friends you have playing the more options open up to you, so you have to bother everyone in the world with spammy updates. And if you’re an introvert like me, your only Facebook friends are your family, the few friends you made when Facebook was popular, and the occasional person who looked up your high school. I have about 40. These games expect you to have 400 friends. And they all have time to kill. It’s like you have to spread the game like a virus.

The other way is to buy their “freemium” items, like “coins” or “bucks” you exchange for the really good stuff. It’s like the “Itchy and Scratchy Money”. And anyone who exchanges their real paycheck on shit like this needs the word “sucker” tattooed on their foreheads.

I came to this realization when I noticed that my day was becoming so filled between blog updates, writing, working, and maintaining my Knights of the Crystals account via the KOTC Companion (an app someone created to “enhance” the game). Before, all I could do was click on the “quests” to level up my character. You get a certain amount of “questing” points at the beginning of the day, and when they’re gone, you’re done (unless you purchase more at one of our many cash-accepting outlets). The other way is to battle other players, but battle strength is based on the friends you have in your guild. So unless you’ve got 400 friends, you’ll never win. But the KOTC Companion auto-selects the prime candidates to kill. But you’ve still got to click, and click, and click, and click, then heal and click, then click, then click, and click.

That’s when I realized. All these games are is clicking. You can’t ever win. There’s no ultimate evil to defeat, or consequences of your failure. There’s no final goal to tell you “you made it”. Even World of Warcraft has a level cap. But here you keep going and going.

These games give you the illusion that you’re playing something, when in reality all you’re doing is clicking, clicking, clicking. There’s no timing, no exploration, no puzzles, no 100% completion, nothing that conventional video games have. All you do is click. And here’s the thing: these games are designed that if you don’t play into the game, you’ll feel like you’re missing out on something. In CityVille, it’s that you have to click on your factories or houses in order to collect population and money. If you don’t, they get “dirty” and are unable to produce. In KOTC, you’re wasting time that you could spend recharging your quest points, or your character stays de-leveled and loses battles.

So screw that. I get nothing out of these games but time consumption. Time I could be using to read a book or researching or writing this blog entry. In other words, I’ve now understood that I’ve got better things to do. And there’s nothing about them that’s redeeming or “fun” in any way. Christ, even Robot Unicorn Attack is a better game than these. Good thing I understood this before I got too sucked in.

Hmm, maybe I should check my Twitter feed one more time.