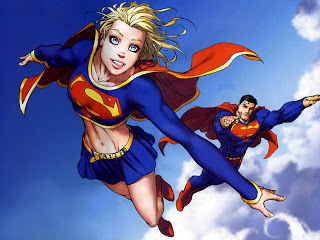 I’ve talked before about why Superman sucks, and no one seems to realize it. No matter who’s behind the wheel, whether it’s a video game or a movie or a book, they can never seem to make it interesting. Because Superman has no flaws, no obstacles, nothing he wants. He can do anything.

Supergirl on the other hand…

Girls are fascinating creatures. They’re a lot of fun, dynamic, and live in worlds consisting of drama, passion, and relationships. Just the fact that she’s Supergirl, not Superwoman, implies that she’s got some growing up to do, some learning, some mistakes to be made. Men, are the other hand, live stories of alienation and hard-earned goals. All Superman has to do is live, and only thing he really worries about is compromising his secret identity, which is easily fixable through deus ex machinas. And these days, it’s not even a big deal to have no secret identity (Spider-Man, Iron Man, etc.).

In the comics, Supergirl was not “in active service”. She had to stay in her secret identity all the time because, well, basically, Superman told her to. ALL her dilemmas involved not revealing her secret identity, often stupidly. Her wig would get caught on a tree branch, or her dress would rip, revealing her superhero uniform (which defies all logic — if you’re not supposed to be Supergirl, don’t be Supergirl).

But without Superman, I think the story of Supergirl would be interesting, far more interesting than that of a man. Superman is essentially a living god, because all gods were made in the image of man, who is powerful. Instead give me a woman, who’s not usually that powerful and suddenly gets power. Think of a god who gets emotional, romantic, insecure about their looks, slow to forgive when someone makes them feel unattractive or stupid. Someone who needs a close circle of friends, who makes connections. Someone who is influenced by their age and monthly cycle. Someone who’s a nurturer, not a fixer. Someone who does not, and cannot fall into the common tropes of being swept away or being dependent on a man.

Existing superhero women do not seem to do this. Wonder Woman, Rogue, She-Ra, Invisible Woman, Jean Grey/Phoenix, Bat Girl/Woman, Lara Croft. These women are cold, bitchy, or dull. They’re really no different than comic book women seventy-five years ago. And more to the point, they’re not plausible as women. And not interesting women, or relatable women.

It’s the same with video games and movies. Too often we have a man in women’s clothing, because that’s the only thing the men writers know. And part of the problem is that men do not understand women’s operating systems, and there are no women to tell them. Women would like geek stuff a lot more if they were targeted towards them. And I think Supergirl is a good place to start.